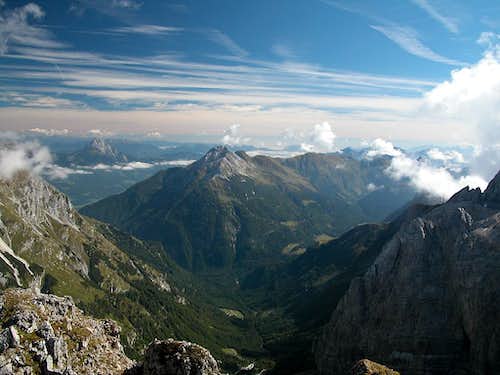 In Kaernten, Austria, there are two summits, called Polinik: Obervellacher Polinik rises south of the river Drau valley, our Gailtaler Polinik rises south of the river Gail / Zilja, just above Koetschach-Mauthen. Its name has a Slovenian origin (in the distant past Slovenian people were inhabiting the whole valley, while today they can be hardly traced only up to Hermagor / Šmohor), meaning 'Noon Peak'; like Poludnik, Ponca and similar (like: Mittagskofel, Cima Dodici). Indeed, when the sun comes over our Polinik, for people in Koetschach-Mauthen it's noon time. East of Ploecken Pass / Passo di Monte Croce, 1360 m, the Eastern part of Carnic Alps main ridge begins. Like the main group west of the saddle, also these mountains are rocky with some impressive walls. But as Carnic Alps are geologically very diverse, also here soon other types of rocks appear. So, while the summit of Polinik is made of grey limestone, already the ridge connecting it with Cima Avostanis / Blaustein in the main ridge is grassy till the top and only some older rock formations appear out of the ridge. 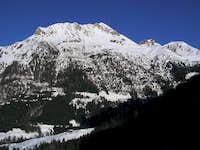 Polinik is the last peak in the side ridge, which from Cima Avostanis / Blaustein, 2193 m, deters from Carnic Alps main ridge towards the North and then on Laucheck, 2153 m, slowly turns towards the West. So, between the main ridge and Polinik there's the beautiful Angerbachtal. East of Polinik, just beyond Spielbodentoerl, 2095 m, a side summit, called Elferspitz, 2251 m, is rising. So, another point on the sun-clock (Elferspitz means Eleven o'clock Peak), proving our hypothesis of Polinik's name origin can be correct. The Polinik summit itself is a three-edge pyramid. Its south slope is very broad, not so steep, grassy and only at the top rocky. Towards the NW and the NE two high rocky walls are falling, the north-western one is beautifully seen when we are driving over the very frequented Ploecken Pass / Passo di Monte Croce. In these walls also some harder climbs are possible.

The normal ascent is an ordinary walk-up, some care is needed only on the rocky summit (SE) ridge. Due to the fact that from the main road you need to overcome only 1120 m of elevation, the summit is often visited. And because of its nice panorama it's worth to come up there. In winter and spring Polinik is also popular as a demanding ski tour (very steep). So, the last part below the summit requires advanced skiing technique and in harder conditions additional care and equipment. 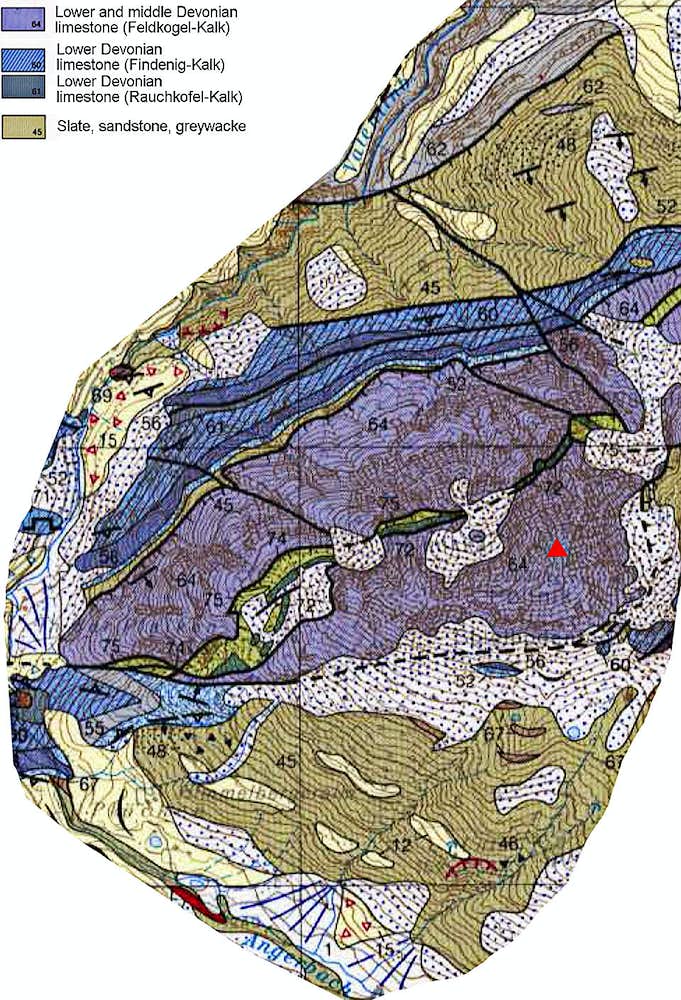 Similarly as its neighbours towards the west (Gamskofel, Mooskofel), also the summit of Polinik is built of Paleozoic sediment rocks. Some 420-360 million years ago in warm, shallow tropic seas, separated with a barrier from open seas, up to 700 m thick layers were deposited, forming today the upper parts of those mountains.

Limestone also got dolomitized, meaning that CaCO3 was slowly transformed into CaMg(Co3)2. These rock layers can best be seen on the northern ridge and in the rocks of the northwest basin. Nice petrified sea plants (algae, sea lilies, corales) can be found in those rocks. The Polinikkar area is included into the famous Carnic Alps Geo Park trail, marked as Geopoint 58.

The picture on the right shows the area, bordered on the left with Valentinbach and below with Angerbach. The summit (violet) is built of Lower and Middle Devonian limestone, the limestone area north of it is even a bit older. The broader surroundings is built of Devonian slate and sandstones, which explains why on the southern side there are nice alpine meadows. The rest (yellow, white) is morraines and gravel.

Click on the above panorama to see it in full screen mode.

Polinik is just high enough to enable a free view on all sides, only a very small part of the western horizon is obscured by the higher Hohe Warte / Monte Coglians group. But the view on this group is also the most beautiful part of Polinik's panorama. Otherwise especially attractive is the view towards the SE, where a whole sea of sharp peaks, belonging to Carnic Alps and Julian Alps is raging. Towards the North you have the beautiful parade of glacier-covered peaks of Hohe Tauern - from Hochalmspitze on the East to Hochgall on the West. Before Hohe Tauern there's the whole range of lower Gailtal Alps and on the West Lienz Dolomites. And far on the SW the towers of 'Dolomiti d'Oltre Piave' are rising - the Monfalcon Group and other ranges of Carnic Fore-Alps.

Through the gorge, falling down from Ploecken Pass / Passo di Monte Croce towards the North, a protected marked path goes, which is worth visiting for itself. Mauthner Klamm is claimed one of the most beautiful gorges of Kaernten. For visitors the bottom part is opened, the tour consists of two parts: the lower part is easy, for family hikes, the next part (called Klabautersteig) is a medium hard ferrata, where some expertise is needed. Altitude to do: 200 meters. The trailhead is in Mauthen, the parking place near Schwimmbad. Then the route goes by the water bed, there are many hanging bridges and tunnels in rocks. The whole tour lasts some 4 hours (30 min + 2 hours upwards, 1 hour 30 minutes downwards by Roemerweg - the ancient Roman path). It is possible also to exit the gorge on Ploecken Pass road - the best option is perhaps to prepare a bike up there and do a round tour.

In the ridge, connecting the summit of Polinik with the main Carnic Alps ridge, there are some less important summits, which can still be a goal of a nice mountain tour.

Beyond Spielbodentoerl there is first the Elferspitz, 2251 m. It's a sharp, grassy peak, no path up there, I don't think many people ascend it (even if the ascent by its grassy, SW oriented valley is not difficult, it's even a nice ski tour). (See the map below!)

Next towards the East is Laucheck, 2153 m. It can be ascended by the path, coming from Obere Spielbodenalm on the saddle NW of the summit. The other option is a nice tour from the other side, from Frondellalm, 1511 m. From there, you can do a nice round tour: Frondellalm - Laucheck - Koderhoehe - Koderkopf - Frondellalm. It's a medium difficilt hike 4 h 30 min. (See the map below!) 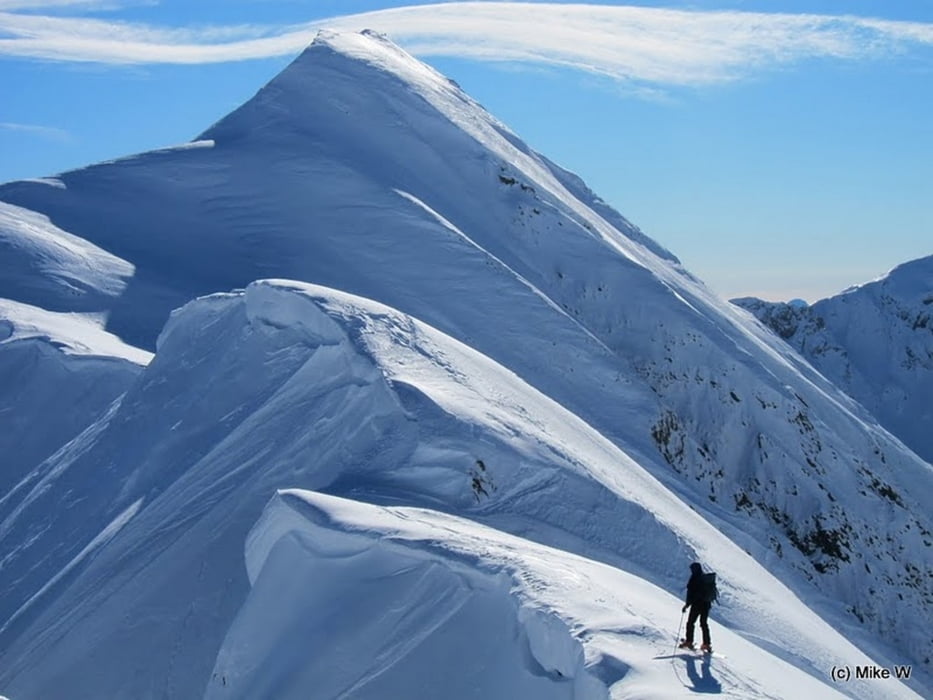 By a grassy ridge the path continues also to the next summit: Koderhoehe, 2228 m. It is a broad, massive ridge mountain above the end of Angerbach valley. It can be crossed by a non-marked path from the NW (Laucheck) to the SE (Koderkopf). This can be done as a summer tour and also as a ski tour. If on a ski tour, then we ascend from Ploecken haus by the usual route on Obere Tschintemunt Alm and from before it directly up on the saddle between Laucheck and Koderhoehe. Then right on the summit. From Koderhoehe we can ski down by the same route, but if we arrange logistic, great is also the ski down towards the north - on Frondellalm and further on by the road in Weidenburg. Of course we can also start the ski tour on Frondellalm - if the road is creaned high enough. But in any case the upper slopes of Koderhoehe are quite steep for skiing, so the tour is safely doable only in good conditions. (See the map below!)

Koderkopf, 2176 m, is a minor summit north of Cima Avostanis / Blaustein. Over it the marked Karnischer Hoehenweg goes, so it gets some visits.

The last summit in the connecting ridge is already on the main Carnic Alps ridge - Cima Avostanis / Blaustein. It can be best ascended by its grassy south slopes.

Along the whole Carnic Alps main ridge the marked path, called Karnischer Hoehenweg goes. Its primary goal is traversing the whole range, and not so much ascending major peaks. Actually this high panoramic route has in many parts its separate Austrian and Italian variants. In the vicinity of Polinik, the Austrian variant comes from Valentintal and runs further through Angerbach valley. On all maps it is still drawn to run from Untere Tschintemunt Alm to Obere Tschintemunt Alm and further over Koderkopf towards the East. But in the last years the connection between the two Tschintemunt alpine pastures looks abandoned, so the marked path goes from Obere Spielboden Alm to Obere Tschintemunt Alm. This variant is in the descent some 30 minutes shorter as the previously mentioned one.

3. Ski tour from Elferspitz. You go from Obere Spielboden Alm towards Spielbodentoerl up to some 1900 m of altitude. There you turn right and ascend through a more and more steep valley on Elferspitz. A middle hard ski tour.

4. West ridge. The W ridge is much less attractive as the ascent option, but if you decide to descend by it, you can do a crossing of Polinik summit. The first part of the descent is easier and goes by ex military trails (from the WW1). Later the descent requires some scrambling and easy downclimbing, up to UIAA I difficulty. On some places you can go (steeply) down from the main ridge, towards the south, but also towards the north, in Polinikkar. Finally you descend from a grassy ridge towards the south and then return either on the Obere Spielbodenalm, or down towards the SW and by the mountain road to Ploeckenhaus.

The first ascents worth to mention were made in the E face, NW face and by the N ridge as early as between 1889 and 1900.

The ascent can be easilly done in one day (5-6 hours), so sleeping on the mountain is not needed. Private huts are only along the road over Ploecken Pass / Passo di Monte Croce. 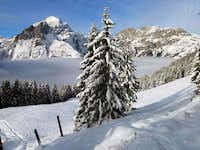 haubi - The start of winter ascent
In good conditions Polinik can be climbed in any season. The summit ridge is steep and rocky and can be dangerous if covered with hard snow or if icy. In snow you need ice pick and crampons, unless conditions are really ideal. For weather conditions, see the main Carnic Alps page!