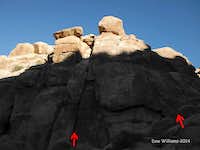 Hop Sing and Bonanza
Corral Wall offers some of the better crack lines that can be reached from the Indian Cove campground. Directly south of Corral Wall are two smaller climbing objectives named Ponderosa Wall and Black Tower. Several routes on these walls make for good additions when climbing the routes at Corral Wall. The bushwhacking from Corral Wall to Ponderosa Wall is intense, but short lived. Both objectives (Ponderosa and Black Tower) receive more mid-day sun in the winter than is alluded to in Miramontes guide book. This is a very quiet area that you are likely to have to yourselves no matter the time of day or week. 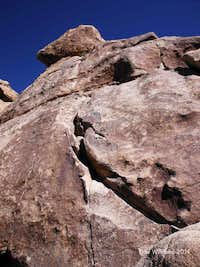 Bonanza, 5.10b
Hop Sing (5.8) is one of the better long moderate cracks in all of Jtree. Similar to Mental Physics up in Wonderland on Lenticular Dome, I would consider Hop Sing a great crack to teach trad leading on. There is no real singular crux to the route and it feels more like 5.7+ by Jtree standards, but it offers fantastic rock, hand jams and movement. Bonanza (5.10b) is not near as good relative to its grade. It has three poorly placed bolts protecting its intermittent faces connected by a short, but fun, slanting crack section. These walls were established in the 90’s. The quickest way down all three of these routes on Ponderosa is a fixed rap above the bolted climb Virginia City located to the far right of the wall but you can walk off left as well and re-enter the bush! I had no problem walking out to the anchor on Virginia City, but some might want a belay to reach the edge.

Park at the Rattlesnake Canyon trail head. Enter the main wash and turn right up what they call Middle Canyon before being forced to turn left and scramble up the white washed stone into Rattlesnake Canyon proper. Boulder hop up to Corral Wall. Hike along Corral Wall until you can turn left and head south through the dense bush following a climbers trail. Boulder hop up to the west facing wall of Ponderosa. Black Tower is just a few more meters south. Hop Sing is the obvious tall corner/splitter.

For the grade, a good route. If it were closer to the campground, I would love to teach crack technique/leading on it. Hop Sing is an aesthetic and long off-set hand crack in great rock from bottom to top. There is no real crux, and it could easily be a 5.7 by Jtree standards. Set up a gear belay at the top of the wall at about 40m. It is hard to set a proper top rope therefore best to bring up the 2nd. Dow

Bonanza is not that good of route and really not worthy of Miramontes "one star" in his guide. It offers a sketchy start and is not sustained from bottom to top. The start involves a height dependent risky stem to reach a bolt followed by a tricky transition into the slanting horizontal crack. The crack offers fun crack climbing for a few meters to a large ledge which leads to a face with two bolts, the second being height dependent yet again with a potential deck below. After that, follow an easy chossy corner (with plenty of rope drag) to the top. Dow