Sava and the hills above it

In the SP article 'Mountains of Slovenia' I was discussing the possibility to split the hills of Central Slovenia into a few groups. Posavje Hills (also Zasavje Hills, in Slovenian: Posavsko hribovje or Zasavsko hribovje) is the biggest mountaineous/hilly area in Slovenia, stretching east of Ljubljana on both sides of Sava river. In that article, I continued: It lies south of Tuhinjska dolina (valley) and Celjska kotlina (basin) and was named by the Sava river which cuts its way directly through the group. This group is not attributed to the Dinarides - righteously so, as it's even on the first glance seen that its ridges are stretching predominantly in the west-east direction... The highest summit of this group is Kum, 1220 m. On this page, I will give just a general overview. It makes no sense to list hundreds of those unimportant hills. The sketch map below is showing only arbitrary selected few hiking objectives, and in continuation I will also briefly describe only a few hiking tours - just to give you a flavor. I will also not describe the rich historical, archeological and cultural evidence - it's impossible to give a complete overview.

From Mrzlica towards the E and SE

What to do in Posavje?

The area is first of all interesting for hiking. Rock climbing sites are very rare, there are just some crags. For biking, the area is also great, but you must accept the fact that it will always go up and down. Only a few traverses are crossing the slopes in longer horizontal stretches. For tour skiing there are opportunities, but due to dense forrests, only short slope sections are clear and open. If you like longer walks on skis, mostly by mountain roads, then there are quite some options. The views from some higher summits are open and very broad. Endless waves of hills are most characteristic for them. On the NW and W, you can see in a clear day the groups of high Alps. On the hikes and drives through the area, you may get surprised by some nice rural scenes.

This is the biggest area in Slovenia, representing 1/10 of the whole country. Its northern border is Tuhinjska dolina (valley) delimiting it from the high mountain group of Kamnik and Savinja Alps. Further to the east, the area is bordered on the north by the Celje basin. On the west, Posavje hills lower down into the Ljubljana basin. On the southern side the area is bordered by a series of Dolenjska area basins. On the east however the border of Posavje hills is quite unclear as it is being blended with the hilly area around the big Panonian plane. For us, it's convenient to close the area on Sotla river.

Geological structure of the area is very diverse, with rocks from many geological eras presented - from the old paleozoic silt rocks, over mezozoic limestones and dolomites, to younger tertiar sediment sandstones. In the middle of the group, around the towns of Zagorje, Trbovlje and Hrastnik, considerable amounts of coal are still unearthed. The area is only on a few places flat. Generally looking, three big synclinales are stretching from the west towards the east and between them, the hills/mountain ridges are running in the west-east direction. But some tectonic faults are also cutting the area ortogonally, so the mountain chains can be quite indented. By one of such faults, for example, from Celje towards the south Savinja river flows, emptying in Sava at Zidani most. The big majority of hills are on the altitudes between 300 m and 600 m, most interesting for hiking are the hills higher than 800 m, but only rare of them exceed the altitude of 1000 m. But, as for example Sava river is flowing through the whole area on the altitude of only 200 m, some elevation gains on hikes can be quite considerable.

To say it openly at the end: By the geological nature the Hills of Posavje do belong rather to the Dinarides than to the Alps.

Some Summits and Hikes

The picture below shows that the network of marked mountain path in Posavje is quite dense. The ascents are easy and the big majority of summits can be reached from all sides.

On the west, Limbarska gora, 773 m, is a very popular hiking destination. Marked path is crossing it in the W-E direction, but the majority of visitors is coming from the south. You can drive up from Moravška dolina (valley) - Moravče, and then park in any of the villages or hamlets below the goal. On top, there's a nice church of St. Valentin and a restaurant. Čemšeniška planina. The 1205 m high ridge mountain is due to its altitude, nice views and a good mountain hut below its top also very popular. Also here, the marked path is crossing the mountain in the W-E direction, one branch is coming on top also from the north. Due to its proximity to the high pass of Trojane, many people are driving towards the village of Čemšenik, 631 m, from there (but can be reached also from other directions). Then you ascend towards the NE and reach the top in some 1 h 30 min. The ascent from the SE (from Vrhe) is nice as well.

Mrzlica, 1121 m, is very popular too, as it is rising between the densely populated Celje basin on the NE and the biggest Posavje town Trbovlje on the SW. A mountain road is reaching from the west just to the mountain hut, below the very summit of Mrzlica, but it's much more nice if we do the last part by the marked path. Popular is also the ascent from the south, from the mountain hut on Kal. The views from the top are very nice. Just south of Celje town there is an area, served by 3 mountain huts. Tovsti vrh, 834 m, is the highest elevation there.

between the towns of Litija and Zagorje, Zasavska Sveta gora is a popular outing destination. There is a chuch complex (on 849 m), a mountain hut and the highest elevation, called Roviškovec, 930 m. Roads are reaching up there from both sides, south and north. Very interesting is also the western part of the ridge. There lies the Vače village. In iron age, Hallstatt period, there was an important settlement. More than 2000 graves were found from that area, with many valuable artifacts. Among them there was a beautifully decorated Early Iron Age ritual bronze vessel (situla), nowadays it can be seen in Ljubljana National museum.

Kum, 1220 m, is the highest summit of Posavje hills. It's quite a busy place, hosting a telecommunication tower, a church (Sv. Neža) and a mountain hut. The summit can be reached from all sides by marked paths. The quickest approach is from Lontovž on the north, 50 minutes, the longest hikes are reaching up from the main towns in the neighbouring valley and last up to 3 hours. Kopitnik is an interesting, craggy elevation north of the confluence of Savinja and Sava rivers (at Zidani most). The summit resembles a horseshoe. NW of Kopitnik there is a small plateau, called Gore (also a village name), with several scattered hamlets. One mountain hut is close to the summit, the other one more remote. Marked paths are coming on top also from Savinja valley (from Rimske toplice - spa) and from Sava valley (from near Zidani most).

Lisca, 948 m, is another very popular hiking destination. Rising quite on the SE and close to the Sava river, it offers specific, iteresting views around. The advantage of Lisca are also its broad, grassy summit slopes. Just below the summit are two mountain huts, you can reach almost till there by car, but coming from the SW, you must drive all around the mountain. 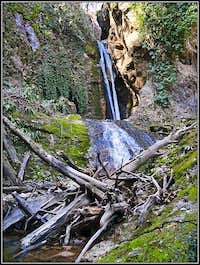 Bohor is a broad, forrested massif on the very east of Posavje erea. In the W-E direction, the massif consists of many summits, but only Veliki Javornik, 1024 m, is exceeding the altitude of 1000 m. The massif is criss-crossed by forrest roads and also marked paths go in all four cardinal directions. On the southern side, the Blanščica creek is forming a nice gorge with many interesting waterfalls. The lower waterfall is 17 m tall, the upper one is in two steps (at least 50 m altogether) and we can even reach in the middle of the complex).

The region above Dolenjska area is much lower, the elevations are rarely exceeding 700 m. But the nature is nice there as well, and the rural landscape is very much worth of exploring (for example by bike). A typical example of such a summit is Gradišče, 706 m. The name reveals that in ancient times there was a fortified settlement. It's only one of many, as in the late iron age the whole Dolenjska area was densely populated by Celtic people. The most explored such sites are for example Vranje (above Sevnica) and Rifnik (near Celje). Our Gradišče, 706 m, is nowadays crossed by a marked path, coming from Višnja gora on the south.

The whole area is well served by a big number of mountain huts, which adapt their opening schedule to the needs of hikers. There you can usually get also quite good local food. Sleeping in those huts is recommended if you decide for a multi-day trek. Otherwise all summits require only a half day hiking commitment.

Posavje hills can be visited any time in a year. In winter, the most frequented paths will soon get trodden. But less frequented paths and pathless terrain in those woods can pose quite a problem when there is much snow.