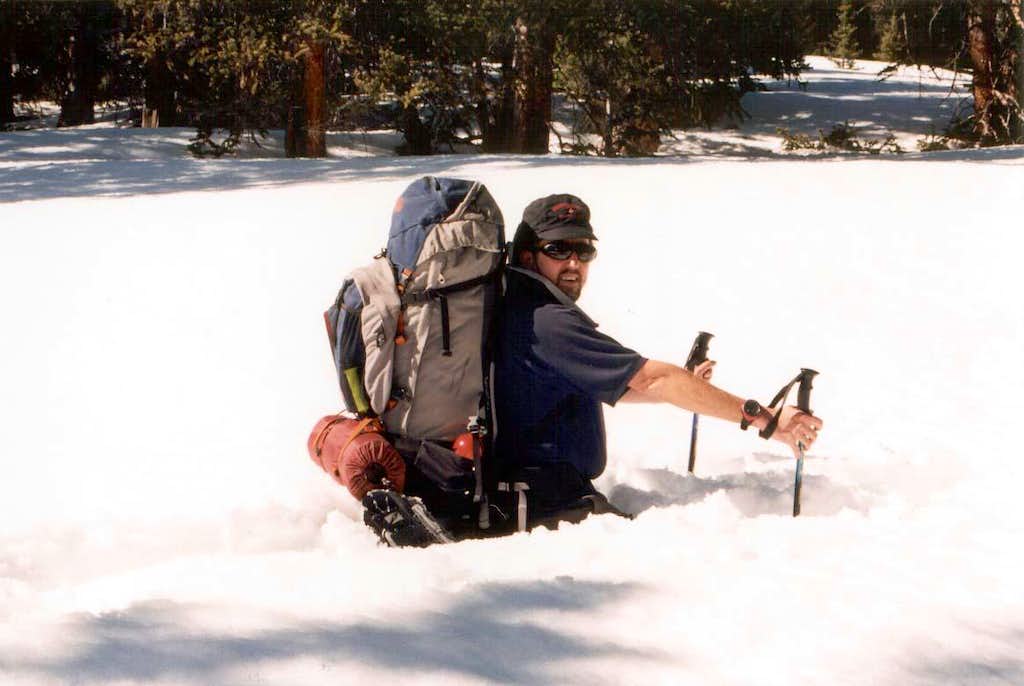 Zscapes post-holing during record temperatures in March 2004. Photo taken along the Mt Elbert Trail.
« PREV NEXT »

The snow was soft, but I did manage to get a nice tan during the trip.

....hope he was not wearing shorts!

No way! I once hiked an eastern peak in thigh-deep snow (Le Conte) and got so tired we had to stop 3/4 of the way up and set up camp. I can't see how you can struggle through snow that deep.

It's a neat picture, but fake. First, the temp in Leadville has never been anywhere close to 80F in March. It barely makes 80 in the summertime. Second, he is just kneeling in the snow with collapsed poles. You can see his legs extending forward and the bottom of his MSR snowshoe sticking out below his pack. :-)

I assure you, the photo is not a fake, though the caption was incorrect in stating that it was 80 degrees. (I updated it.) The weather forecast on the radio that morning called for 80 degree temps. On hindsight, that was probably a Denver station. The temps in Leadville would obviously be lower. Checking the historic records, I see that the temperature in Denver was 75(F) and 51(F) in Leadville that day. (Both are records.) It sure felt like 80 degrees carrying those heavy packs in the sun!

After looking more closely at the photo, I don't believe he was wearing snowshoes at this moment. He appears to be in a slight sitting position. His legs are not long enough to hold the snowshoes in that position. I think they are tied to his pack; this is probably where we stopped to put them on. His poles are definitely not collapsed. We simply hit a soft spot in the snow...

haha doubtful that it is a fake picture- I climbed on Elbert in March of 2008* in high avalanche conditions and the snow on the trail by my measurment was deeper than i am tall in most places, and im Six feet tall...

As the subject of this picture I can assure you it is not fake... My 'buddy' George took advantage of me in an awkward situation but will get him back one day... His wedding is coming up, so who knows... z