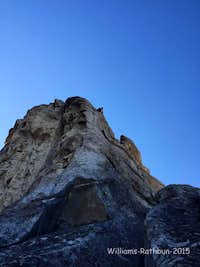 Dow leading Opuntia, 5.10b***
Poultry Pillar, Wedding Wall and O-Town Tower are three rather nondescript features sharing the same ridge located due north from the Castle Rock massive itself.  It takes just minutes to reach these objectives from the trail head. Most of the FA’s were put in during Brad Shilling’s (long time local climbing ranger) wedding and thus the origin of several of the names.  Poultry Pillar offers the majority of the climbs of these three features. It’s bolted southeast arête, Opuntia, 5.10a, if perhaps the best climb and reaches 100’, To Have and To Hold, 5.9, on the same side as Opuntia, is worthy. Its west side also has a few starred moderates.

From the main Castle Rocks trail head, follow the marked trails north and turn west as you would head for Crack House and/or Hostess Gully on the north side of Castle. As you head up a switch back trail between Castle and Poultry Pillar, the colorful southeast face of Poultry is on your right. To Have and To Hold is on the left and the arête on the right is Opuntia (photo).