The area & other general information

Povera Mosca (engl.: poor fly) is one of the few trailheads which are located on the western periphery of the Orsormarso mountains (also know as the Pellegrino massif), a very little known mountain range in Southern Italy, in the region Calabria. Like the Pollino massif, also the entire Orsomarso mountain range is an integral part of the Pollino National Park. From a geological perspective it is the southernmost extension of the Apennines.
The valley of the torrent Argentino, in which this trailhead can be found, is classified Strict nature reserve or wilderness area (IUCN category Ia or Ib). With its countless rivulets, torrents, wellsprings etc., this area is possibly the most water-rich stretch in all South Italy. It is one of the few untouched wilderness areas and one of the remotest and less frequented spots of the peninsula, too. Both its wildlife and vegetation are exceptional species-rich. 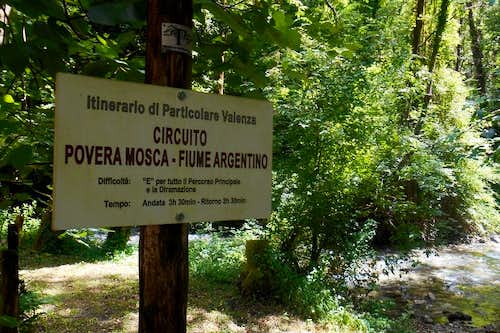 Trailhead 'Povera Mosca' (Orsomarso)
The Argentino torrent and its tributary valleys invite to different activities: hiking, climbing, canyoning. Hiking trails lead up the water course, to the panoramic cliffs of Castel Brancato (922m / 3,024ft) or as far as Timpona Camagna (1,335m / 4,379ft) or Monte Palanuda (1,632m / 5,354ft). The lush vegetation of the valley floor and the speciose forest open every now and again, thus allowing glimpses at steeply pitched rock faces, some of them several 100 meters high. From the cliffs and ridges the view goes over the the higher peaks of the Orsomarso range and the Tyrrhenian Sea.

At the small village of Orsomarso itself there are no hostels, lodging houses or similar to be found. But there are several farm houses (ital.: Agriturismo) in the area which do offer board and lodging; most of them at a reasonable price. A wider range of accommodation options (B & B, hotels, camping grounds) is available at the coastal town Scalea (Tyrrhenian Sea), only a few kilometres from Orsomarso.
The best choice, however, is a stay at the mountain hut 'Rifugio Montano', situated right at the green heart of the valley, at the end of the dirt track and only meters from the trailhead. The place is open all year round and offers local cuisine, a number of simple but clean and spacious rooms and, upon consultation, an area for campers and tents. The owner is quite a guy, attentive and obliging, and full of advice regarding the area, trails etc.
No entrance or parking fees are due. You can leave your car at almost any of the larger lay-by to be found along the dirt track which is skirting the torrent Argentino and leads to the trailhead 'Povera Mosca', where the road ends.

There are several easily recognizable hiking trails starting from the trailhead 'Povera Mosca'. The easiest of those trails, and the most frequented, if you will, is a very nice round trip to the Pantagnoli fountain. This trail is well signposted and does not require any equipment, nor a refined sense of direction or special physical endurance. Terrain, length and the difference in altitude to be negotiated are moderate. It is really recommendable to everybody, so you may also bring your kids or your dog.
For the most part the path follows the stream-bed of the torrent Argentino and crosses the stream (solid wooden bridges) on several occasions. A few hundred meters after reaching the fountain Patagnoli (400m / 1,312ft) the main trail sharply turns left and starts ascending towards the col Valico Castel S. Noceto (610m / 2,001ft) before dipping down again towards the forests of the valley of the Milari torrent.
After passing the fountain, instead of following the indications for 'Povera Mosca', another hiking trail leads up to the location 'Golfo della Serra'. From this point on (a cataract on the left side of the trail) the surroundings are getting even wilder and signposting is increasingly becoming harder to spot. The actual trail will rather have to be intuited, and the use of a proper map is highly recommended.
(N.B.: There is no signal for cell phones, and even GPS devices are not guaranteed to be working accurately in this environment!)

Argentino torrent
Canyoning alternative: In order to access the splendid waterfalls and limpid pools of the upper Argentino, at 'Golfo della Serra' you will have to leave the path altogether and follow the torrent upstream. This means frequently climbing the slippery boulders and - needless to say - getting wet. Basic equipment (helmet, a short rope, harness) and appropriate shoe-ware are recommended and can become necessary, especially for the way back. 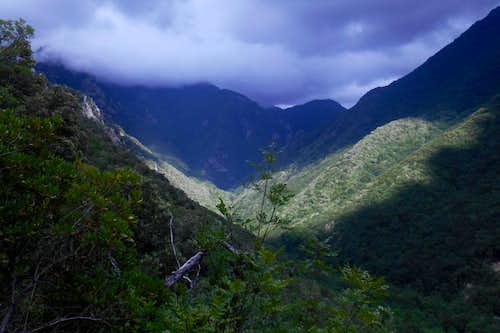 Valle dell'Argentino (from Valico Castel S. Noceto)
Another nice hiking trail starts directly behind the mountain hut. It is (occasionally) signposted with the usual red/white and the number '3', to be found on larger rocks or trees. This trail leads up to the cliffs of Castello Brancato. Although being easily recognizable and not very long, the trail has some steeper parts and includes a notable difference in altitude. After crossing the wooden bridge over the Milari torrent keep on the broader main path and ignore smaller trails which are descending towards the valley.
At a junction you will find only indications for Fonte Pantagnoli (to the right) and Mosca Povera. Keep always direction (straight on) and follow the path as it descends towards a ford. After the ford the path starts to rise again and, while zigzagging uphill, is almost constantly becoming steeper. Although signposting is rare, orientation should be no major issue. Reached the col, the forest will open and allow great views over the Milari and Brancato valley. Turn left for the narrow ridge that leads up to the cliff of Castello Brancato, or right for a (closed) mountain hut. Only a few meters from the hut you will find a copious well. The 360° view from the top is really rewarding. 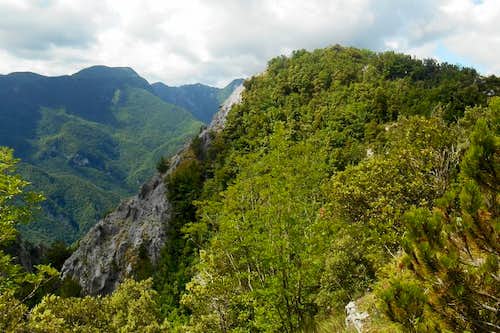 Castello Brancato (from the ridge)
Yet another hiking trail, for Monte Palanuda, can be found in the vicinity of the well. For other destinations, additional information about the trails etc. you may also consult the always helpful owner of the mountain hut 'Rifugio Montano'.

Map with some itineraries

By car the trailhead can be reached only from the small Calabrian village Orsomarso. A 6 km long dirt track follows the course of the torrent Agrigento from the village up to the actual traihead. The dirt track itself is mostly in good conditions and crosses some narrow bridges. In spring (melting of the snow) and after heavy rainfalls the torrent can swell considerably, causing the road to become impassable. 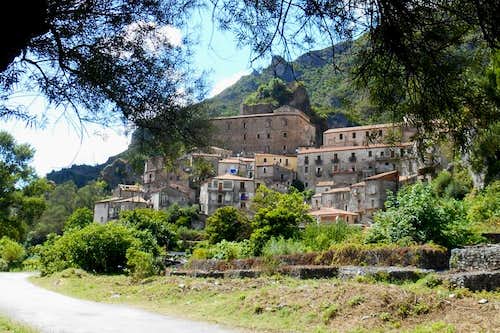 The village Orsomarso
The village Orsomarso is accessible both from the north (Mormanno) and the south (Scalea). The coastal town of Scalea is perhaps the better choice for anyone arriving from Naples. Simply take the motorway A3 (Salerno - Reggio Calabria) and exit at 'Lagonegro Nord'. Take the state roads SS585, SS18 and SS504 for Scalea, and later for Orsomarso.
The alternative route passes the beautiful high plains of Campotenese. Instead of leaving the motorway at Lagonegro, exit at Mormanno and follow indications for this village. After passing the entire village, take the first road to your right. This country road is quite narrow but in good conditions. It offers great views over the Pollino massif (north) and the Pellegrino massif (south-east).
Although Scalea can also be reached by train from Naples, public transport is rather limited and the availability of bus connections etc. should be checked beforehand. In order to reach the trailhead by foot, from the village of Orsomarso, it is a 6 km hike through the lower Argentino valley.