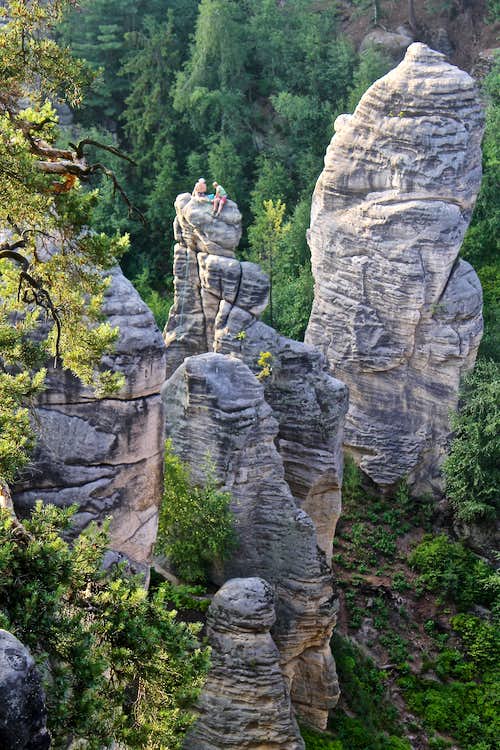 Climbers Prachovske skaly
Prachovske Skaly is a part of Bohemian Paradise and truly it is a rock paradise, especially for rock climbers. It is also very popular for hikers and nature admirers. Bohemian paradise is the oldest protected landscape area in the Czech Republic and in 2005 it became the core of a new UNESCO Geopark.
Good to know is that climbers are considered an attraction here, so their entry is for free as long as they present an association to some climbing club (e.g. American Alpine Club, which I used).
The climbing is on a sandstone and the protection here is on old rings, which are widely spaced, and/or kinderkopfs and knots. Chalk use is not allowed. And climbing is super fun!
The first tower climbed at Prachov Rock was Mnich (meaning Monk), an easily recognizable formation with a large Czech flag on its summit. It is the highest tower in Prachovske Skaly Rock Town. "Stara Cesta" = Old Route rated only as II-III is a chimney route, which was first climbed April 10, 1907 by J. Hendrych and J. Kubin.
I am not aware of any rock climbing guide in English (and I have asked locals, guides, czech climbing veterans). However, there is a Czech guide with a brief descriptions and illustration of climbs. It is helpful even for non-Czech speakers.
Each tower features several climbs of different difficulties, there are rappel rings at the top of towers. Each tower also has a little metal summit container with a nice informative booklet and summit log. Most climbs are set up to climb with one 60 meter rope and locals recommend a thicker rope for the sandstone.
It can be hard to get oriented here, and I think it is helpful to have someone with you who knows the area. Consider hiring a guide since the protection (most climbers are not familiar with the use of knots and kinderkopf's; any type of metal protection is prohibited here). I met with Josef Simunek AKA Simon in Prague at his store, and he was great source of information. He was kind to let us use his climbing guide books, equipped us with a bohemian sandstone rack and sold me a great czech climbing rope. His family also owns a nice and cheap guest house very close to Prachovske Skaly. 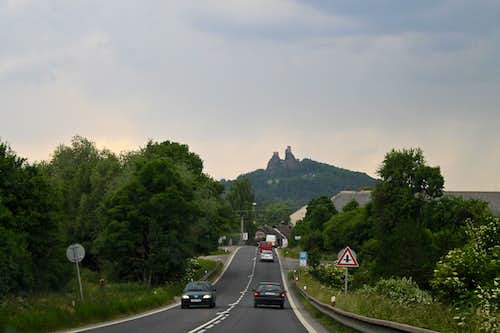 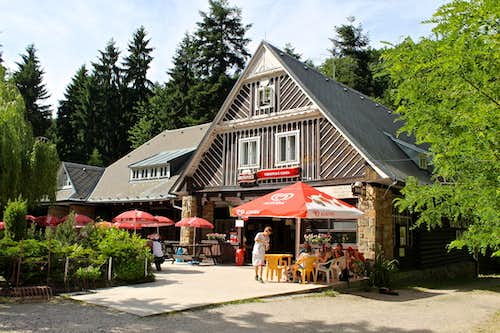 Tourist Hut
Prachovske Skaly = Prachov Rocks are located about 90 km northeast from Prague.
You can easily get there by car from Prague, following the highway towards Mlada Boleslav and Jicin.

A bus, or train will easily get you to a small and historic town of Jicin. It is about 5 km from Jicin to Prachovske Skaly. The area is popular with cyclists, and if you can rent a bicycle it is an another option how to explore the area.
Bus from Prague is cheaper and faster. Take Yellow metro line to the end - Cerny Most bus station. Buses leave from here for Jicin and the journey takes about 90 min. 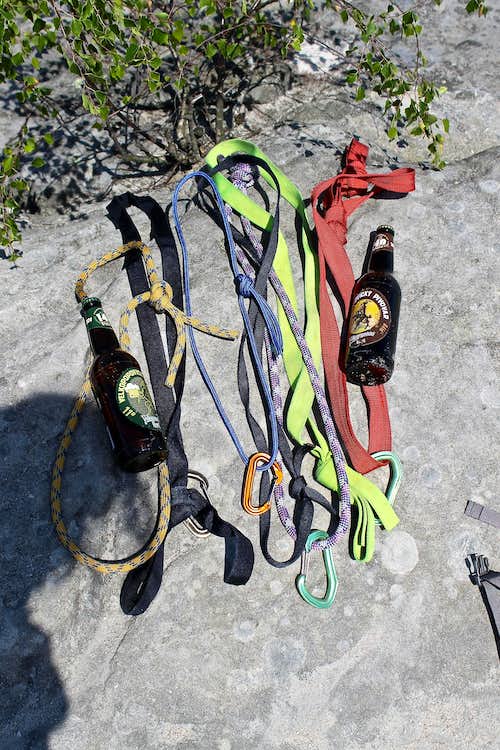 Kinderkopf
For most climbers it sounds crazy - protection with knots? But yes, it is how it is done on the soft bohemian sandstone.
The advantage is the reduced weight. The disadvantage? Can you trust it? it seems so freaky!
Most climbers use just simple knots for little cracks, and for the wider ones they make a special "children's head = kinderkopf", which is a larger circular series of knots (see photo on the right). You can use different thicknesses of ropes to create different sizes, flat material for very narrow cracks etc. Obviously, no need for slings since you clip you knotted material directly. Kinderkopf is also knows as "monkey fist". The old veterans do not recommend kinderkop's claiming those can more easily slip, but keep climbing on knots of different thickness.
The knots and kinderkopf's are surprisingly easy to remove. Some climbers carry a little wooden pick to remove the small knots, but I found no difficulties.
Do they hold? Czech climbers claim yes, but I have not seen anyone falling onto one. The old tradition of clean climbing and not falling should be applied here :), and we felt like climbing pretty much unprotected.
You can actually buy a book, which will teach you how to tie knots and kinderkopf's for protection.

Supertopo discussion on knots for a passive protection, including even an illustration how to make a kinderkopf - monkey fist.

Rock type: soft sandstone
Protection: widely spaced large rings and above mentioned knots (basically not much), kinderkopf's, and slings on horns and hourglass
Length: most towers are 30 to 40 meters long, some up to 80 m
Rope: locals recommend to climb on one thicker rope, e.g. 10.2 mm or even a greater thickness
Descent: rappel rings at the top of each tower, some have 2 if rappel is longer than 30 meters
Scenery: amazing, Prachovske Skaly are part of Protected Area called "Bohemian Paradise".
Helmet: a good idea, but for some reason not a part of the local culture
Chalk: not allowed. (I received an advice from one of the locals - you supposed to spit into your hands and then wipe it off onto you pants, then chalk is not needed. And it really worked).
Orientation: it can seem confusing to identify different towers, but luckily each summit is equipped with a nice summit log and name of the tower (so you can confirm whether you climbed the right one:) 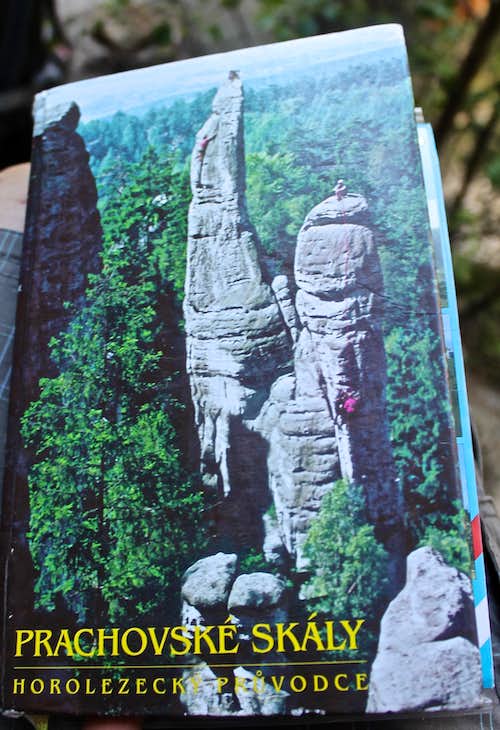 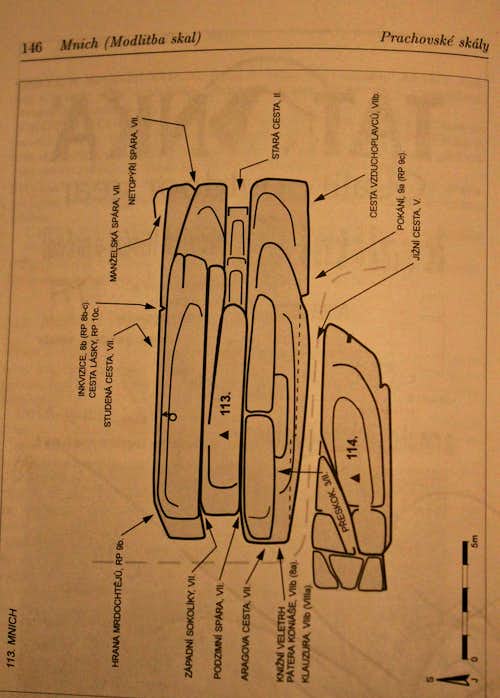 Czech guidebook
I have not seen the climbing guidebook at the gift shop at the entry to Prachovske Skaly, but it was widely available in local bookstores, e.g. small town of Jicin 5 km away. Also local climbers, may help you to get oriented here, and expect to see climbers summiting little towers. The area is very popular, and it is exciting to hear their commands and see climbers sitting on the small summits of separate towers. I got some more beta from german climbers, which seem to like the area since I could not find any information about rappel in the climbing book.

Lano - rope
Lezec - climber
Kruh - ring (large rings fro protection, some small biners did not fit through it. I think you could hang a car on it).
Uzel - knot
Komin - chimney
Spara - crack
Stena - wall
Hodiny - hourglass (the local sandstone has a lot of hourglass formations, which are great to sling for a protection)

Marked trails criss cross throughout, there are frequent signs and trails are easy to follow. Some trails lead through thick forest, some in the close proximity of rock formations, and some passages are very tight. Expect to climb stairs up and down, and reach some spectacular overlooks. Maps are available at the entry to the park and at local bookstores.
One of the most famous sections is called "Cisarska Chodba" = Emperor's Corridor. Supposedly named after a visit of austrian emperor (Czech lands were in that time part of the Austrian Empire) Franz I (1768-1835).

The weather is important to follow since you are not allowed to climb on wet sandstone. The local climbers are pretty dedicated in preserving this soft sandstone and follow weather closely.

Average days with precipitation per month