The original description on this page related to the "Normal SE ascent" on Presanella, so, only briefly also the route over Bochetta di Monte Nero was mentioned. But as I did not do that variant, I reworked this page to describe more in detail only the route over Passo dei Quattro Cantoni. Perhaps some old ratings of route quality were referring also to the other variant.

The route over Quattro Cantoni pass can still be considered as one of normal ascent routes on Cima Presanella. But among the normal routes from the southeast it is not the shortest one. The route over Bochetta di Monte Nero is more direct and is usually described as "normal" from Rifugio Segantini.

Otherwise the Quattro Cantoni route is nice, scenic and diverse. It allows us to avoid two characteristic sections of the "normal" route: crossing the small Monte Nero glacier and the rocky notch, where a short descent by ferrata is needed. But all that helps only a little, because the upper part of both routes is the same, and the short climbing section (crux) is there. So the overall character of our route is: Gentle ascent over broad moraines, a picturesque saddle, then losing some gained altitude, a more steep ascent over snow and gravel, then a short climbing detour on the main ridge and the final snow slope to the top. 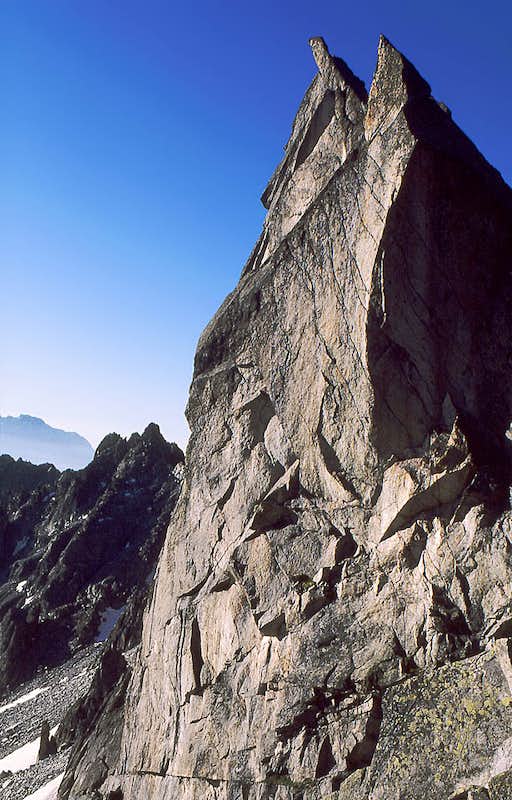 Difficulty: It's a demanding hiking tour on high altitudes, with a few places protected by steel cables and pegs and towards the top with crossing easy glacier sections. On the Alpine Scale it is graded PD, on the Swiss Hiking Scale its difficulty is graded T5, short climbing details of UIAA I.

Orientation: The route is overall well marked. But if you opt for some shortcuts, you will need some orientation skills.Map to recommend: Tabacco 1:25.000 - Adamello, Presanella (No. 52).

Slopes orientation: Most of the slopes are south oriented. But the key rock sections and also a steep couloir below the Orobica bivouac are west oriented, so shady in the first half of day.

Exposition: The places below Orobica bivouac are quite exposed and so not appropriate for people suffering from vertigo.

Objective dangers: Poor visibility in higher regions can be dangerous, in the ravine below Orobica bivouac there's some danger of rockfall. Otherwise a qute safe route.

Best season: Summer months, normally from July till September. Coming too early in summer will mean more snow sections, coming in autumn will mean harder snow and more rocks. The tour is long, so coming late in autumn be aware of a short day.

Gear: Good shoes, ice pick and crampons. Due to long moraines, poles can be useful. For less experienced a short rope.

Tour start: Val d'Amola, end of the road on 2000 m. A bit longer is the approach from Rifugio Cornisello, 2120 m, more towards the northeast. Both variants join at Rifugio Segantini, 2371 m. See the parent page of Presanella how to get to the hut. Highest point: 3558 m. Altitude to overcome: cca 1900 m (due to some losses of altitude).

Time for ascent: 5 h. The return by the same route will take you 4 h. If you want to combine this route with the Bochetta di Monte Nero route, it is better to ascend by the latter. Times:

From the Segantini Hut, 2371 m, follow the marked path towards the west. Soon you reach the crossroads, where you can choose between the direct ascent over the Monte Nero glacier (right variant) or the longer one over the Passo dei Quattro Cantoni (left).

(Monte Nero Glacier has no crevasses and usually over its slope a good trail goes. So, over moraines ascend the snow field and cross it diagonally. You keep left of the elegant Monte Nero 3078 m and over a short rocky part reach the lowest point on the ridge (Bochetta di Monte Nero). From there, you must descend to the other side by a short, 50 m ferrata, and soon you're down on the eastern side pocket of Vadretta di Nardis. You cross it towards the west and join the Quattro Cantoni route on a high shoulder, 3267 m.)

Towards the Passo dei Quattro Cantoni

On the Passo dei Quattro Cantoni

On the crossroads continue left by a well marked path which brings you into a broad valley below the main ridge. Mosty crossing by the right (southwards oriented) slopes we soon reach just below the Passo dei Quattro Cantoni. Some security devices help you on the narrow notch, 2809 m. From Segantini hut 1 h 15 min. On the picturesque notch the western horizons open. Now you to descend on the other side. Also there a short section of the path is protected, then you follow a good path. You must descend some 200 meters and cross towards right, where you then finally reach the trail which comes by the broad Nardis Valley. 30 min from the notch. In continuation, marks and ciarns lead you towards the north. You ascend over side snowfields of Nardis glacier. The slopes are at first not steep, then some easy rock sections and steeper snow fields come. No crevasses there. So we gain the S-SE ridge of Presanella, where the Bochetta di Monte Nero variant joins from the right, 3267 m. 1 h 45 from Nardis valley. 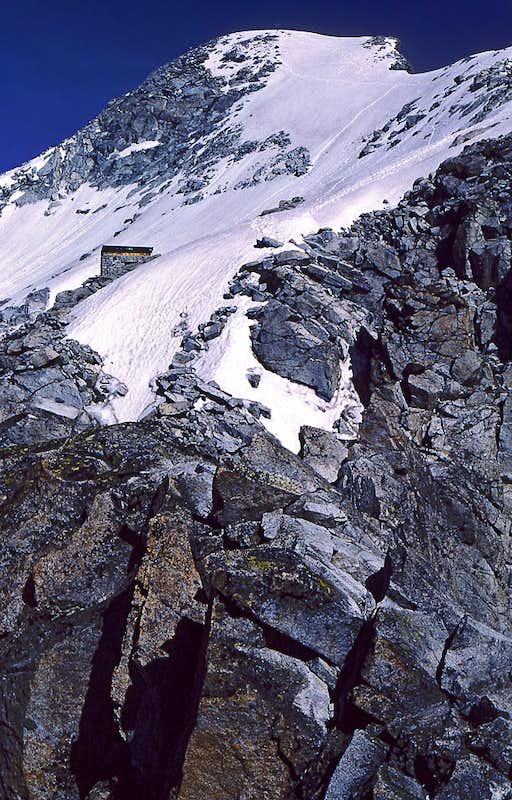 On the SE ridge - bivouac from the crux notch

Over snowfields and easy rocky sections you continue up to a broad shoulder and by it to the foresummit of Presanella (also named Monte Bianco, 3370m). Here you reach the notch, where it seems that the easy route hopelessly ends. On the ridge are hard granite towers, on the right a few hundred meters of east wall. Towards the left (west) a steep ravine leads (“I caminetti”). In 1988 on top of it you had to search the rock and behind it, you found a wedge for belaying. Now (2016) the crux passage is secured with metal pegs and cables, but it is still described as easy climbing (UIAA I). So, you first descend a few meters by the ravine, then the route turns horizontally to the right and over two successive narrow ledges you reach a steep snow couloir. After climbing the couloir you are again on the SE ridge of Presanella. The terrain gets easier and soon you are at Bivacco Orobica, 3382 m. Another 1 h till here. From the Orobica shelter an easy snow slope and the final ridge leads towards the summit (another 30 min). 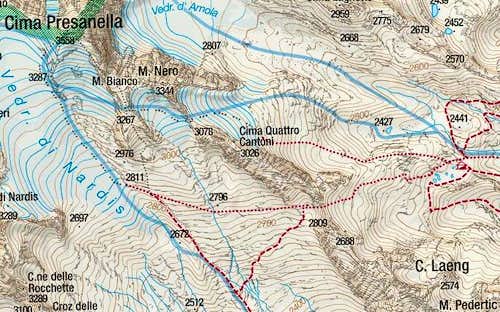 Click on the map to get a very detailed topo-based map in high resolution!

If you have information about the recent route status, please contribute!