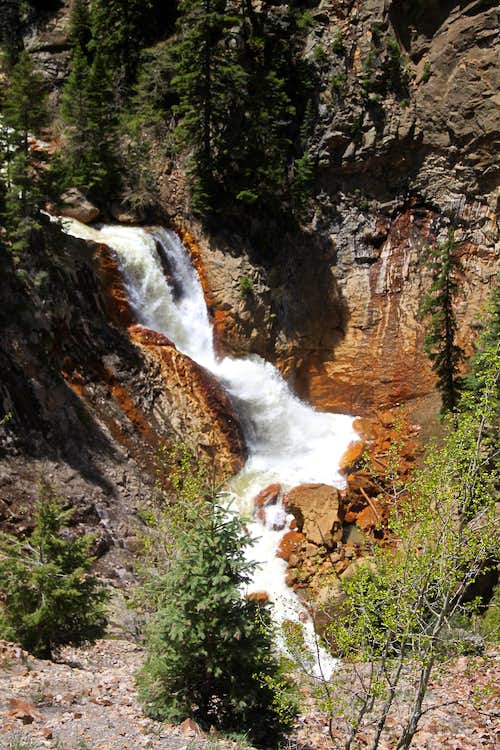 Waterfall over Uncompahgre River gorge. The Tyrolean Traverse is located just above  the waterfall 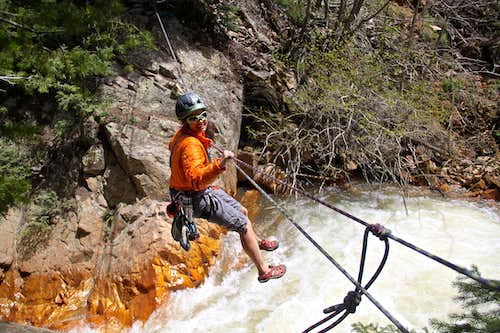 This is a scenic,  4-pitch outing about 1/2 way between Ouray and the top of Red Mountain Pass. The approach is short, the views are amazing (especially over the Uncompahgre River and Red Mountain #1). The climbing is on solid quartzite rock, pretty good quality for Ouray area. The climbing starts easy and the more interesting pitches are higher up. The climb has two possible finishes - 5.8+, and Princess Ella’s Happy Ending 5.10a. It is a sports route, you don’t need any traditional gear.

It is a relatively new route described in a new rock climbing guide book for Ouray Rock (not the old one), best done late spring, summer and early fall. The route has a very scenic approach, which involves Tyrolean Traverse across the Uncompahgre River Gorge. The whole climb is bolted as mentioned above (sport climb), and involves 4 pitches, first 2 very easy, more fun climbing on the last 2 pitches. The climb is 280 feet long.

This climb is located on Waterfall Wall. There are several climbs in the area, and Princess Ella’s Magical Adventure is one of the easier climbs. The last = 4th pitch has 2 variations, one is rated as 5.8+ (more popular one), and the other is called Princess Ella's Happy Ending rating as 5.10a, which some prefer to extra protect with a couple of camalots near its finish (Mountain Project recommends bringing #0.75, and #2; we had no trad gear with us).

The Waterfall area is located 4 miles south of town of Ouray, just off Million Dollar Highway (Highway 550). The Wall was hard to access in the past, it involved swimming class 5 rapids and a danger of falling over waterfalls. There was installed a tyrolean traverse across the Uncompahgre river in 2011, which makes the approach easy and gives it an extra sense of adventure. 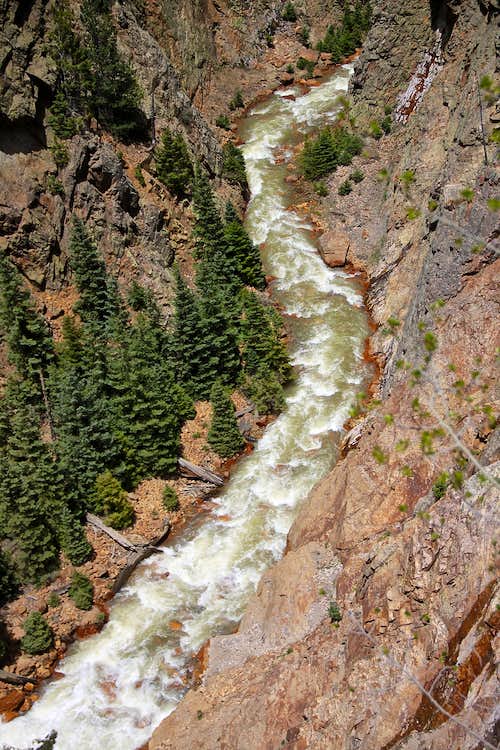 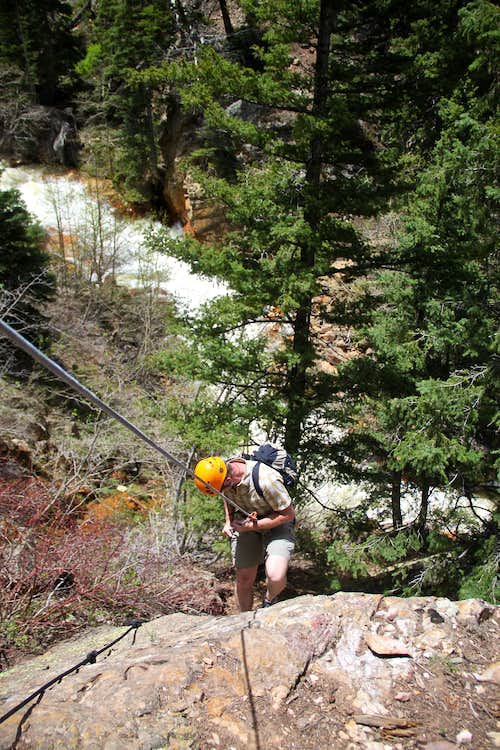 Drive south on US Hwy 550 (=Million Dollar Highway) from Ouray for 4 miles, passing Ouray Ice Park, Horse Tail Falls at 2 miles, past Engineer Pass turn off on your left at 3 miles.  Drive for another mile and park at a small parking lot on the right side of the road. If you will look into the gorge, you will see a nice waterfall on Uncompahgre river (photo above). The tyrolean traverse is located just above the waterfall, and is not visible from the road above. There is enough parking for about 3 cars. Across the road is a mine shaft (not very deep), you can go in and explore.

The drive along Million Dollar Highway is very scenic and there are several easily accessible peaks nearby. If you wish to combine several adventures, it is easy to climb Princess Ella's Magical Adventure in a half day and climb a nearby peak, like Red Mountain #1 (nicely seen from the climb), or nearby Hayden Mountain, or stroll for an easy hike around Ironton. The summit of Red Mountain Pass offers several more peaks: Red Mountain #3, McMillan Peak, Ohio Peak, Trico Peak.

A small  trail above your parked car leads you down to the Uncompahgre river. The steepness does not exceed class 3 scramble until you come to a large boulder. There is a fixed rope set up, which you can rappel down to the river and to the start of tyrolean traverse. The tyrolean traverse is tons of fun, and easier on your way in (slightly more down).

Location of the Climb: Descend as described above to the base of the tyrolean traverse and cross the river. Scramble straight up in a small (sometimes wet) gully for about 40 feet, and follow a small trail marked with small cairns south, upstream for about 150 yards. Princess Ella’s Magical Adventure starts in the middle of a buttress, and is easy to identify thanks to shiny bolts seen from the trail.

Description of the Climb

1st pitch is rated as 5.7 and felt easy, definitively not sustained 5.7, only a few moves of that grade. There are several bolts, which I did not count (? 5-6), and the pitch ends on a nice ledge with fixed anchors. It is 25 meters long.

2nd pitch is rated as 5.4 and is very short only 15 meters. It has only 2 bolts, higher up it has a short class 3/4 scramble section. Again, there are nice fixed anchors and a large ledge to rest on. If you are not worried about rope drag and throwing rocks from the 2nd belay station on the climber below, you can combine both pitches into one.

3rd pitch - rated as 5.8, and again felt very easy with a few moves of that grade. It has about 5 bolts and leads to another ledge with fixed anchors. Views of the Uncompahgre river and Red Mountain #1 are getting better and better, and if you look down into the gorge you can spot a wreck of an automobile. Hwy 550 is infamous for car crashes. 3rd pitch is 30 meters long.


4th pitch - rated as 5.8+, and I think it does deserve this grade. It starts easy, but higher up has 5.8 moves. The rock is solid and this pitch is the most enjoyable one from the whole climb. Princess Ella’s Happy Ending is to the right (north of this one), and both climbs finish at the same anchors. We did both finishes and I found the 5.10a Happy Ending finish less fun - it is not climbed as much and had more slippery lichen on the route. The 5.10 finish has a run out on the overhanging end, and it is helpful to have a # 0.75 camalot for that part. The last pitch is 35 meters long.

You Tube video of the climb and local weather

Ouray Rock and its vinicityRoutes