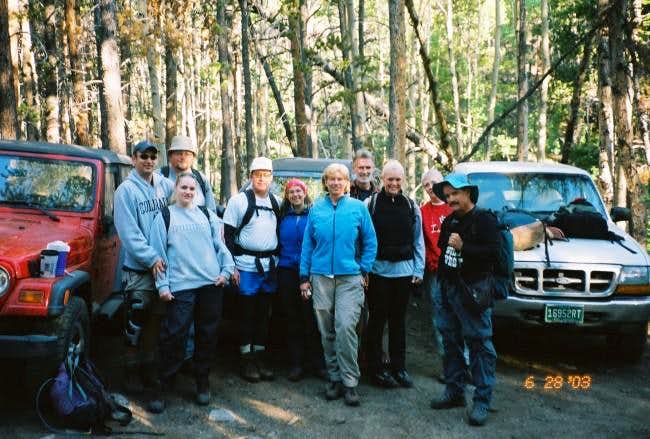 Left to right: Shanti Pless, who rocketed up and down Harvard, then down the jeep road to pack up all the gear while his friend, Attila Dobai (new SP member and beginning climber) did serious battle with the mountain. This guy struggled with exhaustion and dehydration but never gave up, was victorious and hooked on the high country. Shanti's wife, Aimee, remained below and read some books. Probably the smartest one of the bunch! Jim Lierman, long time partner, highly experienced leader/organizer of this wonderful group. Andrea Radcliffe, climbing for about 4 years now, recovering from pneumonia, came just feet short of the climb. Didn't matter, since she's done the mountain before. Lost her camera and her coat on the way down. She was lucky we found them as we descended. Barbara Bailey started hiking with the group last year. Mt. Harvard ran her through the ringer but she emerged victorious. Randy Breunlin is a hike leader and is very experienced. Shanna Johnson, a promising beginner was also run through the ringer on this trip, but is hopelessly hooked on climbing as result. Sharon Breunlin is Randy's better half and often underestimates her abilities. She really shines on the trail and in tough situations. The group's advisor is on the end, stupid and controversial teal green hat and all. Would you trust the fate of your group to this guy? Perhaps the best ones to ask are the three folks that climbed their first 14er on this trip, because the rest need their heads examined.