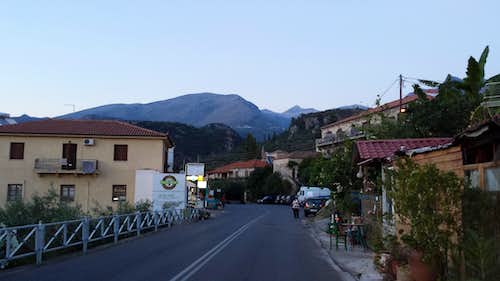 The summit as seen from the village of kardamyli

Taygetos lays between Kalamata and Sparti in the southern part of the Peloponnese. Sitting in the middle 'leg' 100km long and 30km wide it is pretty massive. Profitis Hlias lays east of the central massif (see Taygetos main page) just south of Sparti.

The main route is the refuge route (east direct) which to access you should drive to Sparti and head south towards Guthio. Exit at the village of Xirokambi and head West. The road is generally good and asphalt until it reaches the forest road towards the refuge. The road continues to be pretty good but it now consists of dirt. Use a GPS to get there since there are many linked roads and you don't want to get lost.

If you are going to head into the deeper trailheads it is recommended that you drive or rent a 4x4 car since Peloponnese roads are known to be shit, but you can also hike from trailheads in villages where you won't need a 4x4.

It is the fastest and easiest route up the mountain. Just 4 hours round trip.

Starting at the refuge at 1550m of elevation the route heads Westwards and starts just behind the refuge. The sign says it's just 2:45h to the summit, for us it was 3h. This section is generally forested through a lush forest that is generally not steep while it is mainly dirt and rock. The section is 12 mins long and ends just under a big rock-face.

The climb of the rock-face is a very unfortunate part of the climb being very steep and rocky, sore legs all the way through the 18 mins it takes to finish this section.

Starting at an open field at the alpine with lush green grass and flowers. It is a long section that crosses one point of interest 'Gouves Place', it takes about 58 mins to cross this section. 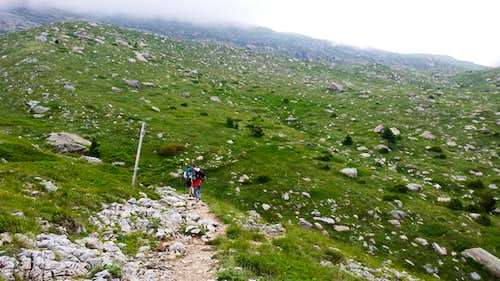 Heading up through the fields 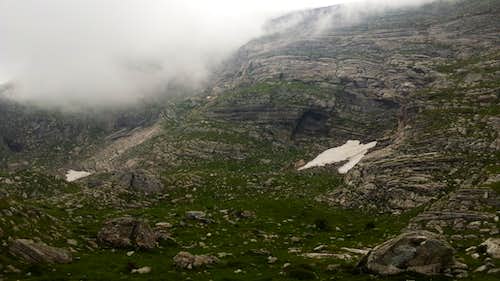 Gouves place (1860m elev.) with snow (Jun 16)
The trail is mainly dirt and not that steep with the exception of two or three parts that are quite steep and rocky. The rock traverse just at the end of section 3 is the steepest part.

Starting at the beginning of Plakes the weird lined rock formations on the summit pyramid and finish at Portes. The beginning elevation is 1990m and the final elevation is 2238m the time to cross the section is around 1:02h. The section is steep throughout and the whole section is on a rock with very good views all around. As we reached the upper half of this section the west winds became apparent. 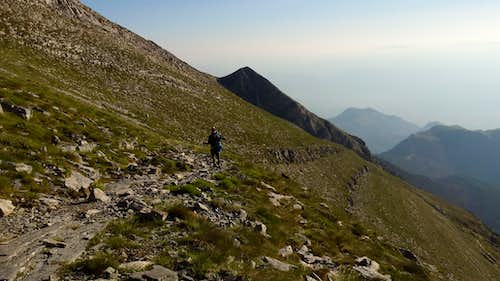 Descending Plakes with a view of the unnamed summit 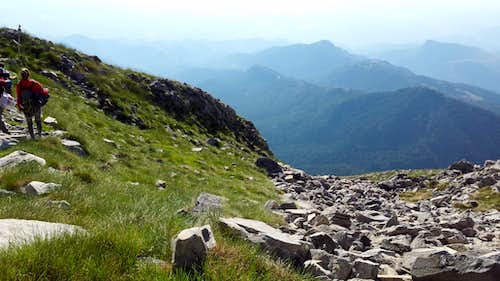 A rockfall spot just before Section 3 on the descend

Starting just after Portes at 2238m of elevation and finishing at the summit of Profitis Hlias at 2407m it is by far the worst most annoying part of the whole climb, lasting just 32 mins. The trail is overall very steep and rocky with pebble rocks meaning the chance of you falling is pretty high, the views offered westwards are amazing and well, it is just under the summit. Personally after 2:30h of hiking and carrying 20+kg of gear I stumbled more than once. 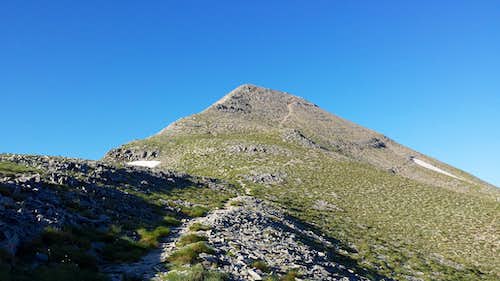 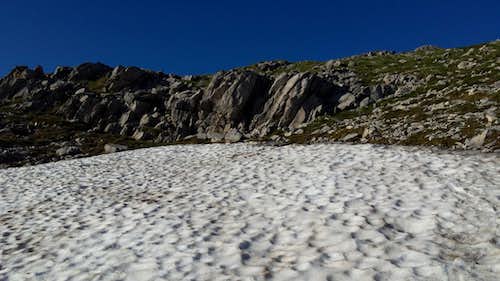 A large snowpatch just under the summit (Jun 16)

The mountain is summited year-round although you will be needing winter gear to summit during the cold months. During the summer there is the 'Profitis Hlias day' where many people summit the mountain and stay at the summit and party.

An effect that happens while the sun sets or rises due to the pyramid shape of the summit, where the shadow cast by the peak is a perfect triangle projected onto the ground. 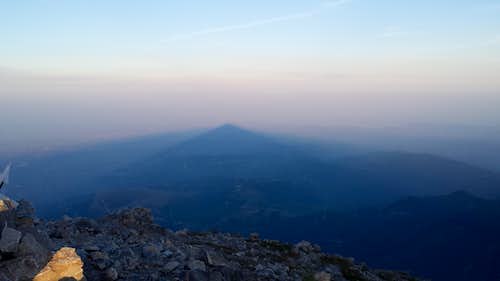 The shadow seen during the sunset 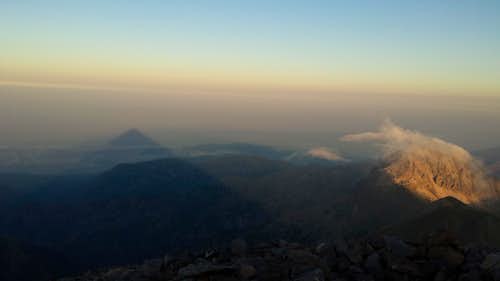 The sadow during the sunrise with view of Xalasmeno

The Summit of Taygetos offers insane views, here is a time-lapse of a sunset from the summit and a 360-degree pic.

All the marked trails on the mountain: http://www.hellaspath.gr/index.php?p=2&m=1&mntid=54