Psili Korfi or (high peak) in english is the highest point in the western province of aitoloakarnania in western Greece. Psili Korfi is also the highest point in the akarnarian mountains at 1589 meters, or 5255 feet. Psili Korfi is climbed by European tourists from the resort towns of Vonitsa and Paleros, and also by the locals who live in the region. The most popular trail is from the western face of the mountain. Its begins from the monasteri Romvou, which was used as a guerrilla hideout by the Greeks in World War II against the Germans. In the vicinity of the monasteri there is a fresh water source. Anyhow, the most famous route is visible at the gates of the monasteri and continues down a ravine. Once traversing through the ravine, the trail swithbacks up the mountainside until a rock buttress is reached. From here to the top its all rock scrambling class 3. The views from the top are amazing as the island of Lefkas is seen to the West, the Amvrakian gulf to the North, the Pindus mountian range to the East, and the giant massif of Boumistos peak (1573 meters) is seen to the south. 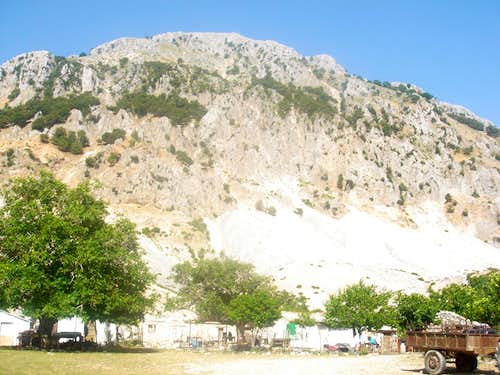 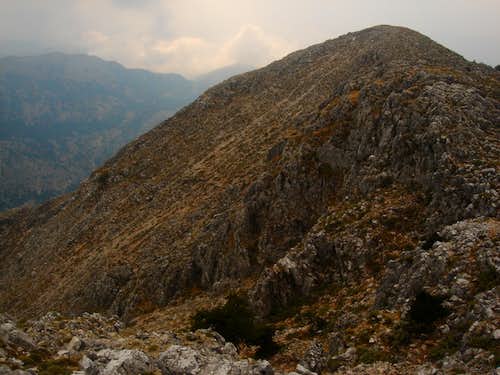 From the city of Vonitsa, travel south to Monastiraki, which is 13 kilometers away. Once in the town, there will be signs directing you to the monasteri Romvou. From the town to the monasteri it is roughly 7 kilometers traveling in a southbound direction. The road is asphalt up until the last 2 kilometers, then it turns into a smooth dirt road. The kalantsis route is found at the gates of the monasteri. For more experienced climbers, instead of heading up the road for the monasteri at the foot of the Psili Korfi massif, continue south bound on the road to the small abandoned settlement of Vatos. From here two wash outs will be seen heading from the summit of Psili Korfi. The climbing here is class 4 technical so only experienced climbers. The right (south) wash out is the Rematia route while the left (North) wash out is the Paniyiri route. The base elevation here is at 2500 feet and tops out at 5200.

Serekas Mountain: The westernmost range in the Akarnarian mountains is the Serekas mountain. This long mountain rises 1171 meters above a bay in a matter of a few miles. Although low in elevation when compared to other peaks in Greece, Serekas can be a very challenging feat as its limestone walls drop over 1000 feet straight down in some places. In fact a German climber fell to his death a few years ago while attempting to climb the sheer west face of Serakas. Getting to the trailhead of Serekas is simple as all one has to do is visit the beach town of Paleros, famed for its numnerous hotels (www.paleros.net), and continue southbound on highway 56 until signs for the Agios Dimitrios monasterti direct you up the base of the mountain. Once at the parking of the Monasteri head up the mountain as numberous foot trails exists (bird hunters frequent this area in the winter).

No permits are required for this climb.

Psili Korfi can be climbed all year around. The summer temperatures can reach over 90 to 100 F and also the persistent threat of thunderstorms can be a problem. Meanwhile in winter the peak can be buried in snow, especially duirng the months of January and February. Ideally, the best time to climb this summit is in the spring when the temperature can be just right.

There are no campgrounds there. In Greece is camping not allowed but anybody does it !! If you make no noise and no pollution nobody will tell you to go away. Just do not camp near the villages. Also try to be friendly with the local sheep herders!

Conditions for the region can be found at
http://www.wunderground.com/global/stations/16643.html
There is no danger of avalanche on this mountain