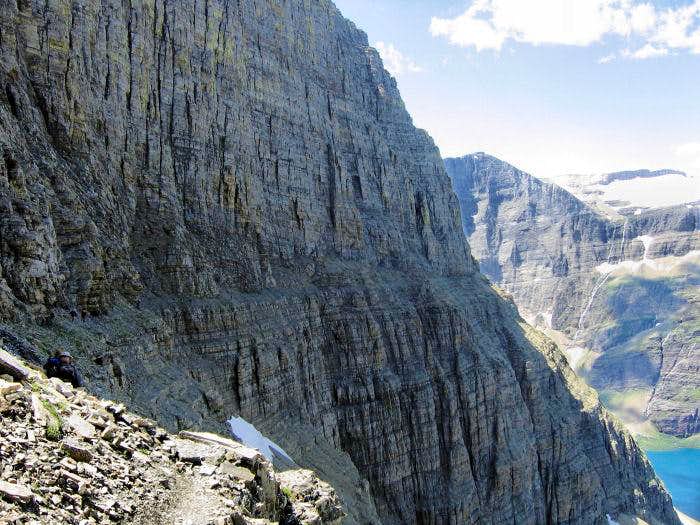 These three pictures of the actual goat trail give a good feel of what at least half the four miles along the cliffs were like. Please forgive the substandard technical quality on these three images—the lighting was extremely difficult, and beyond the capabilities of my camera. Or the photographer. Photo by Vernon, July 20, 2005.
« PREV NEXT »

I have been to the tunnel at least 5 times and I never would have guessed there was a route across those cliffs. Now I want to do it!!!!

where exactly is this trail- maybe that little sliver of smoothness at the bottom left?

You can follow the trail (it is indeed that "little sliver of smoothness") through the picture, beginning at lower left. From the hiker (lower left, but close), begin wrapping around, following the continuation of the trail. You'll see other people in the image, on the trail, but quite small in the distance. Keep following the trail, which looks more like a scree-covered ledge (which, in places, it is!), until it wraps around the corner of the cliff face. In places this trail wasn't quite as bad as it looks, but at times it was every bit as bad! This part of the trail (that is, against the cliffs) was approximately four miles duration, about half of which called for very careful placement of feet, and required quite a bit of concentration against the almost constant exposure. The trail is an amazing experience in itself, made even greater by the kind of views that words can't begin to describe, and photos are only a bit better. Seeing is not only believing, being across the canyon from walls rising approximately 5,000' feet...will blow the top of your head off! (What you do is, you stop walking, and look! Time after time after time after....) This trail (it is not man-made, is really a goat trail) is the heart of what has been called "the greatest twelve miles on the North American Continent." If you can take a day out of your mountaineering life to do it...do so.

Well after seeing where the trail does indeed go, I'm wondering: has anybody died one this?
Regardless, I'll be sure to put it on my life list.

How windy does it get along there?