A mountain for every season

Pumacioletto or Rocca Pumacioletto 1690 m is a rocky peak belonging to Appennino Parmense Orientale, a chain located in the Eastern part of Parma province, running between Passo Cirone on the Western end and Passo Lagastrello on the Eastern one. From the main Apennine ridge, located along the watershed between Tuscany and Emilia-Romagna, a few ridges branch off to the North. Pumacioletto is placed along one of these secondary ridges and precisely along the ridge starting Northward from the main watershed, at first forming Rocca Pumaciolo and soon after Pumacioletto, divided by a broad saddle named Sella Pumaciolo.

Hikers can climb the interesting Normal route from Rifugio Lagoni, or alternatively the route starting from Passo della Colla, which join the previous route. These itinerary can be attended in any season, in wintertime obviously with the necessary gear (crampons or snowshoeing, depending on snow conditions).

For rock climbers the interest of the mountains focuses mainly on the South West wall, where different multi-pitch climbing routes have been realized, and on the nearby Falesia of Asfodeli, with several single pitch climbs.

The closest town is Parma, a 200.000 inhabitants town located 110 km from Milan and 90 km from Bologna, while the closest villages are Corniglio and Bosco di Corniglio, both located on Emilia-Romagna side.

Coming from Milano or Bologna (A1 motorway) exit Parma main and take the SP 665 (Massese) towards Langhirano and Capoponte; at Capoponte traffic roundabout take the right exit, reaching Corniglio, Bosco di Corniglio and the locality named Cancelli, where you are at a road fork. Turn to left and take the gravel road running inside the beautiful Val Parma Forest getting after about 5 km. to the locality named Lagoni, meaning Great Twin Lakes (65 km. from Parma).

From Lagoni m. 1342 take the trail n. 711/a to Sella Pumaciolo starting near a stone-fountain just in front of the hut. After a paved section and a few ups and downs you reach a junction with some signposts. At this point leave the main trail and turn decidedly to the left (signposted Pumacioletto and Passo della Colla), beginning to rise at first on open ground, then entering the beech forest and reaching a saddle in the woods with signposts (here it converges the second normal route coming from from the Passo della Colla), Sella Pumacioletto.

From the saddle turn sharply to the right and follow the good track in the beautiful forest of high altitude twisted beech, coming briefly out on open ground with a fine panoramic view of surrounding peaks.Walk up the wide ridge of blocks and vegetation, quickly reaching the rock summit with the summit cross.

The itinerary begins from Passo della Colla 1467 m., a mountain road pass that connects Lagoni with Valditacca. This route is shorter than the previous one and can be considered a variant, as it joins the previous route on Sella Pumacioletto. Advisable only to people starting from the side of Valditacca. From the pass take the left path that enters the wood (n. 737) and climbs steeply up the beech wood getting Sella Pumacioletto, where it meets the previous route.

The two itinerary can be combined.

- From Lagoni m. 1342 take the trail n. 711/a to Sella Pumaciolo starting near a stone-fountain just in front of the hut. After a paved section and a few ups and downs you reach a junction with some signposts. Ignore the left branch (Pumacioletto Normal route) and continue along the main path, soon reaching a second fork. Ignore the right branch and continue always on the main path, reaching a steep short grassy slope just before getting Sella Pumaciolo. From here climb up the grassy slope to reach the base of SW wall.

The routes on SW and South face starting from the left:

It's a fine single-pitch climbing sector located on a crag just on the left of Pumacioletto SW wall. There are 25 single pitch length up to 28 meters and with difficulty between 5b and 7b.

Approach - From Lagoni take the trail n. 711/a to Sella Pumaciolo starting near a stone-fountain just in front of the hut. After a paved section and a few ups and downs you reach a junction with some signposts. Ignore the left branch (Pumacioletto Normal route) and continue along the main path; after 5 minutes the crag appears on the left side. 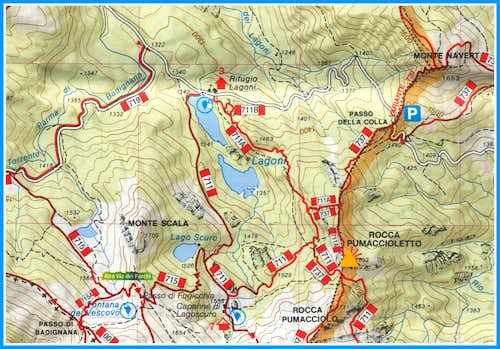 Pumacioletto is located inside Parco Nazionale Appennino Tosco-Emiliano, established in 1997. Fires are strictly forbidden and the whole fauna and flora is protected. Don’t disturb fauna and other mountaineering and hikers’ peacefulness with every kind of noise.

Rock climbing - The best period goes from May to October

Hiking - It’s possible to hike all year round on Pumacioletto; winter ascents require the essential gear as crampons and an ice-axe