Punta what? One certainly could complain that I always put up obscure mountains on SP and Punta Allochet is certainly one of them. Though many people might have seen it from Passo di San Pellegrino while crossing the border between Trentino and Belluno few will have noticed, less will have remembered it and almost nobody will have climbed it. Why?

The obvious reason is that its neighbours are the more attractive destinations but that is only one half of the truth. Punta Allochet is located on the Monzoni Ridge in the Marmolada Group in the Dolomites and access distances are rather long. There is a rifugio nearby (Rifugio le Selle) but this is used as starting point for two very popular ferrate the "Via Ferrata Gino Badia" and the "Via Ferrata Bepi Zac" which both follow the ridges of the Costabella Chain to the north of the Monzoni Ridge.

So what is there that stands out about Punta Allochet? I have talked about what it is not but the remaining question is "What is it really?". Quite a lot of things, come to think of it. First and most obviously a mountain close to more attractive neighbours is a natural lookout peak. The southern Marmolada Group is at your fingertips as is the Cima Bocche Group to the south of the San Pellegrino Valley. On fine days (ours was hazy while good enough to provide us with a severe sunburn) you can see all southern Dolomite Groups, Civetta, Pale di San Martino, Latemar and Rosengarten / Catinaccio.

A second reason for visiting Punta Allochet is - a third ferrata, the "Alta via Bruno Federspiel". This is rated as an easy Sentiero Attrezzato (equipped trail) but due to its length - it traverses the whole Monzoni chain - it is very strenuous. The climbing parts are actually rather easy UIAA III secured by very firm cables - if you are 6 foot 4, like I am. Smaller persons can get along by using the cable bolts to step upon. But the unprotected part around Cima Malinverno to the west of Punta Allochet is very scary. Grass covered slopes mix with scree covered rock and a north face dropping vertically for several hundred meters. Sure footing is mandatory!

Speaking of the scree on the rocks :-) let me present reason no. 3: The Monzoni chain is composed of all kinds of rock - in some places even Dolomite. Most abundant is a kind of black volcanic material sintered by the pressure it was subjected to over the ages. There is porphyry (probably some lodes stretching all the way from Cima Bocche to the south) and granite. In the western part, where the Monzoni Ridge runs into the Vallaccia Group you find main dolomite whereas on Punta Allochet there is - flintstone. Therefore the northern talus slopes of Punta Allochet shimmer with a red glint, making it quite unique among all those dolomite rocks. One of my guidebook claims that you can mine minerals on the Monzoni Ridge and Punta Allochet would be the place I would start my search.

The number four reason for the visit of Punta Allochet is - history. Like many of the mountains in the area the eastern part of the Monzoni Ridge was a place of heavy fighting during World War I. From Passo Le Selle through the Rizzoni towers the Austrian Kaiserjäger kept vigil while on the other side of Valle di San Pellegrino the Italian Alpini had their positions all along the Cima Bocche Group. The object to secure or attack was Passo di San Pellegrino, a rather low and easy pass if you compare it to others in the area. The Austrians dug caves through the mountains, with supporting trails to the northern sides and the actual positions on the southern ones. Punta Allochet was taken by the Italians during the war by storming up the steep southern slopes of the mountain but they weren't able to keep it due to heavy artillery fire from Passo le Selle. They had to retreat on the same day. Today the Alta Via Federspiel follows the supporting trails of WW I and at Punta Allochet actually runs through one of the Austrian caves. Together with the Via Ferrata Bepi Zac it has been equipped with plaques comemorating certain events of the war.

Solitary as it may be - Punta Allochet is the last point the average hiker is able to get to without having to bother with any climbing sections. The trail is exposed but poses few problems - if you come from Passo le Selle. Many (make that some) people do but most stop at Punta le Selle, where the summit is quite exposed. Directly behind the Allochet Summit the real fun begins with a 10m UIAA III downclimb.

We didn't meet a single person on the whole Monzoni Ridge. The date was July 27th 2005 where all the obvious places in the surrounding groups were crowded like hell...

Been there on a not quite perfect day. Lots of sun but lots of haze too. Only the direct neighbourhood could be seen. Good views of the Monzoni and Costabella Ridges that would say.

There are two possible trailheads for the climb to Punta Allochet: Passo di San Pellegrino to the south-east and Malga Crocifisso in Val di San Nicolò to the north. Depending on what you want to do one might be preferrable to the other. 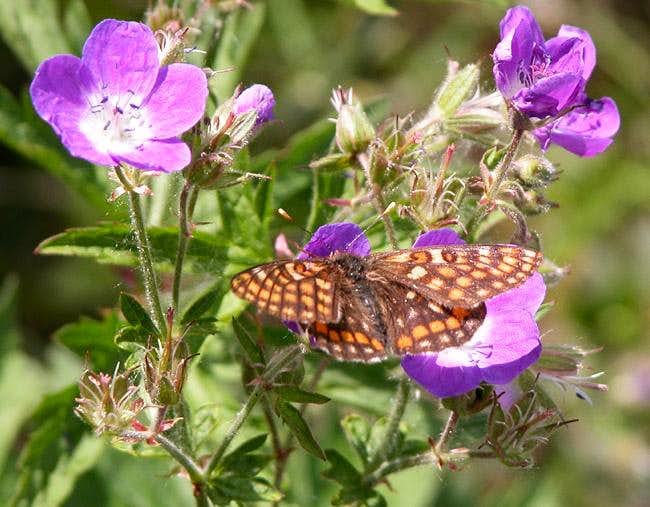 I'm not aware of any red tape on the Monzoni Ridge. Take your refuse with you and don't disturb wild animals. Orchids are protected and during the long approach to Passo le Selle from Malga Crocifisso you will encounter them in big numbers.

Camping
The closest campground is Vidor in Val di San Nicolò. Its address and the ones for the other nearby campgrounds are:

Other accommodation
The best information on boarding houses and hotels can be found on www.dolomiti.it. The site is not complete – you might find more information on local tourist web sites, but it already offers an impressive list. The following listing gives you an overview for the surrounding villages and towns:

As a first try, let's consider that a place name was usually linked with a special use of the land directly situated in the neighborhood of a peak, the latter being used only as an orientation point. "alus", "alos" is an old celtic name for a more or less 90 cm plant = Symphytus officinale (english : Common Comfrey, deutsch : Gemeiner Beinwell), usually growing on basic to neutral pH ground, up to 1500 m. So, that would show that meadows somewhere under that peak could be colonized by that plant, of which another variety : Symphytus tuberosum exists, more keen to accept slightly acid pH ground. The colour of the flowers rank from violet, pink, to bright yellow, as pH moves from basic to acid ground. Of course, there were particular medicinal uses of that plant, reasons for which such a place could be precisely named.

Allochet = allos-eg = place where allos grows. But this is only an hypothesis...