The wilderness surrounded by a vivid blue sea, the rough granite with incredible “tafoni”, the forest of pino laricio: the superb beauty of the Bavella landscape, regarded by many people as the most astonishing amongst the Mediterranean countries, is out of discussion. Everything is wonderful and also a small peak may give an intense emotion: it’s the case of Punta Caletta, a nice summit belonging together with Punta Aracale and Punta Ciaccianu to a set of peaks in the Velacu Group, an important extension of the Paliri chain located SW to Foce Finosa and finishing with Punta Velacu. It’s lying east to Col de Bavella, the entry point to the wild Bavella range, and it’s well visible on the left of the road D268 rising from Zonza to Bavella Col.
Punta Caletta was formerly called Pain de Sucre Jaune -meaning Yellow Sugarloaf – from the alpinist Michel Fabrikant, one of the greatest experts of the Corsican mountains, who devised the GR20 in the 1970s. The peak extends towards North-West a beautiful and interesting spur, offering a classic climb with moderate difficulty.

Corsica, l'Ile de Beauté (the Island of Beauty), belonging to France but much closer to Italy, can be easily approached by plane (airports both in Bastia on the Eastern coast and Ajaccio on the Western coast) and by ferry-boat from Livorno and Savona italian ports. The most convenient destination in Corsica to visit the Bavella area, one of the wildest region of the island, is the airport of Bastia if you’re getting there by plane; the same Bastia port if you’re getting there by ferry-boat. The main entrance to Bavella Massif is Col de Bavella m. 1211.

- From Bastia (Corsica Eastern coast) follow the road RN 198 towards Solenzara; a few kilometers before getting there, turn to right following D268 to Col de Bavella (km. 130 from Bastia).

A classic trad climb on excellent granite in a magnificent environment. Spectacular views all around. Several variants are possible.

Approach: there are two possibilities:

A - From the Bavella Col follow the road D268 towards Solenzara for 1.8 km, park the car and take an unsurfaced forest road on the right. Follow it for about 2,5 km. and join the GR20 coming from Col de Bavella. The forest road cross the stream Volpajola (San Petru). Immediately after the ford take a path on the right ("C" signposts) that initially runs alongside the stream, then enters the magnificient "pino laricio" forest. After 5 minutes leave the main trail that heads to the right and continue to climb on the well-marked trail with cairns, pointing straight up at the base of the wall. Attack under the vertical of a big overhanging tafone (sling visible). 45 minutes from the road.

B - From the Auberge–Gite d’Etape “du Col de Bavella”, situated 500 m. down Bavella Pass along the Solenzara (NE) side of the road D268, follow the forest road starting just behind the hut and joining the GR20 trail; the path descents to reach another forest road, crossing the stream Volpajola (San Petru). After the ford carry on as described in the previous point.
L1 - Climb some "tafoni" on the left of a thin black crack stopped by a block, follow a ramp on the right of a dihedral, then a slab. Belay on the left on "tafoni".oping dihedral a bit to the left of the first one. Reach a chimney, climb it and exit to a wide ledge above another obvious dihedral. Belay below this latter. 4c, 40 m.
L2 - Up the tafoni, pass inside an incredible hole, then climb on carved rocks, reaching a large chimney. Cross the chimney and climb a rounded spur to a belay on a small becco below a little wall. 4c, 50 m.
L3 - Climb the wall slanting right, the directly and then slanting left, climbing another more difficult little wall to the belay. 5b, 45 m.
L4 - Traverse slightly to right, then up directly to a pillar. Follow the pillar to a small terrace with a clessidra. 4c, 35 m.
L5 - On the right a sloping slab leads to the summit. 4b, 40 m.

Descent: from the summit reach the fore-summit (to the East). Near a cain there's an anchor for the first short rap (10 meters) to a vegetated ledge. Follow the ledge to the East for a few meters to a big pine with numberless slings. The second abseil from the pine leads to a little col. Head to North (left) and follow a wonderful and panoramic gully (cairn) returing to the starting of the route.

Bavella is really a fantastic world, a preserved milieu situated inside the Parc Naturel Régional de Corse - Parcu di Corsica. Free camping and bivouac are not allowed. Fires are strictly forbidden. Maximum care is required to keep for the future this extraordinary environment.

Nature is wild and peculiar; in Corsica we can find more than the 5% of authoctonous kinds of flower and plants, in addition to authoctonous fauna. On the contrary, several kinds of animal current inside Mediterranean countries are away from Corsica, like squirrels and vipers.

Climate is the typical one of the mediterranean middle-mountain areas situated at these latitudes: often very hot in summer and with cold and snowy winters; early and middle Spring and early Fall are the better seasons to climb. Due to Bavella closeness to the sea, winds are often stronger how much they are at the same height in the Alps. Rainfall sometimes are important and dangerous when joined with strong winds. On the contrary, sometimes we can find some long periods of drought.

The best period goes from late April to middle October

There are also two equipped campsites along the road D 268 between Solenzara and Bocca di Larone: 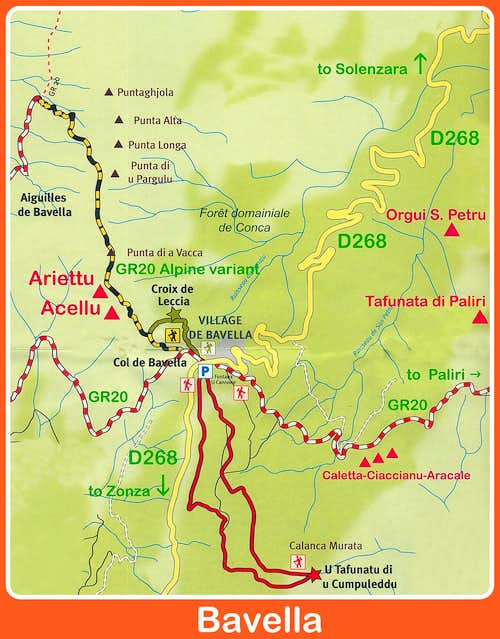