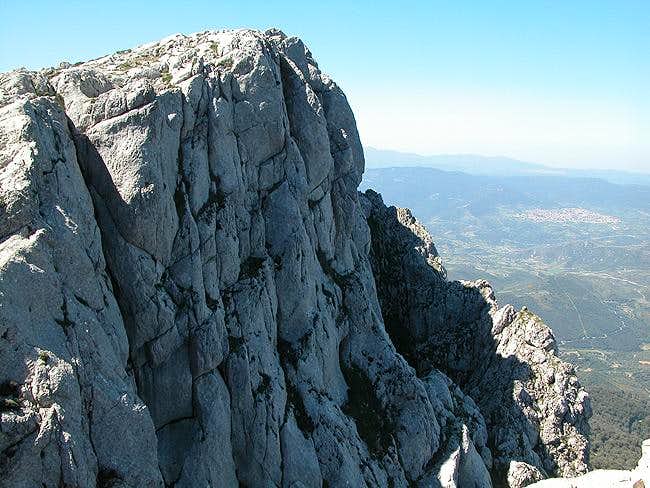 Punta Carabidda belongs to the mountain range of the Supramonte Range in Sardinia / Sardegna. It is part of the impressive western wall of the range and towers almost 1000m over the town of Oliena in the centre of the island. Despite of its vertical western face it can be climbed rather easily. A forest roads winds to Scala 'e Pradu a saddle between Punta Carabidda and Supramonte's highest summit, Monte Corrasi (1463m).

Supramonte is a karst high plateau composed of white limestone which drops vertically on its northern and western sides. To the north there are Bruncu Nieddu, Punta Cusidore, Punta sos Nidos and Punta Ortu Camminu, to the west Punta Carabidda and Monte Corrasi. A little further south Punta sa Pruna and Punta de sos Curoz form a smaller side ridge with less impressive faces.

The climb onto Punta Carabidda follows the forest road to Scala 'e Pradu and from there on along the southwestern ridge directly above the west face. You are awarde great views down onto the provincial capital of Nuoro and the towns of Oliena and Mamoiarda. Another very interesting aspect of Sardinia's karst mountains are their flowers: orchids, lilies and cyclamen fill all habitable spaces between the white limestone rocks. 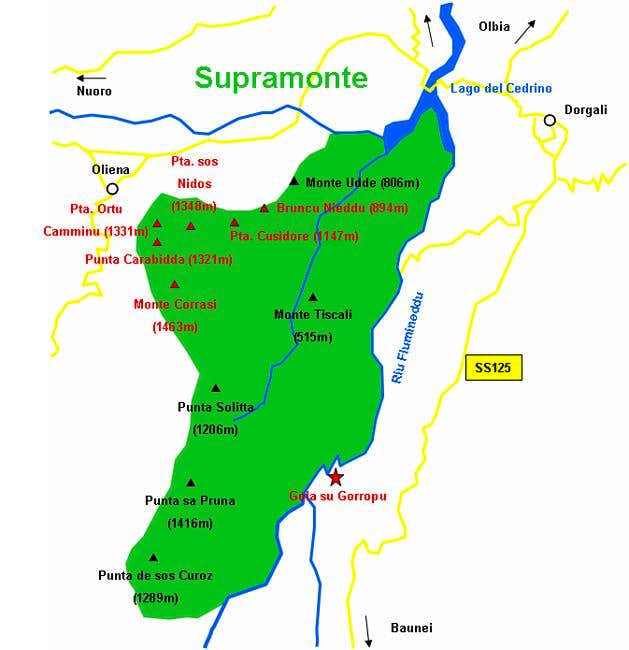 The ascent trail to Punta Carabidda follows the forest road to Scala 'e Pradu, which in principle is a saddle to the south of Carabidda. West of the saddle there are quite a number of bizzarre rock formations: towers, spires - in short campanili. They are a good resting place - climbing them does not seem to be feasable. In contrast to all other sections of Supramonte these campanili are formed by very fragile limestone.

Approaching the mountain from Olbia airport
Get on motorway SS 131 south in the direction of Siniscola / Nuoro. At the exit Lula / Dorgali get off and turn on SP38 south (again direction Dorgali). Shortly before you reach the town turn right on SP46, direction Oliena. In Oliena follow the signs to Monte Maccione, which - if I understand correctly - is the larger mountain of which Punta Carabidda is a part of. The road leads to a restaurant at which you can park your car.