It was after the first Himalayan trek, that I had planned on getting started with our very own Sahyadri treks, which are nearby. 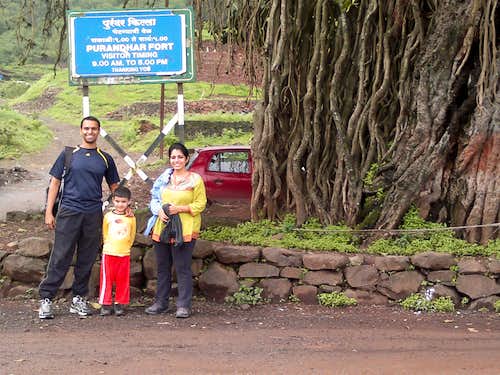 Sahyadri is the name of the mountain Range that runs north-south on the western side of India. It has @ 375 forts built by the great Maratha warrior, Shivaji, who invented the concept of Guirella warfare in the jungles and valleys of Sahyadris. To reach most of these forts, one has to hike up a mountain. In our endevour to visit as many forts as possible, we started out with Purander. 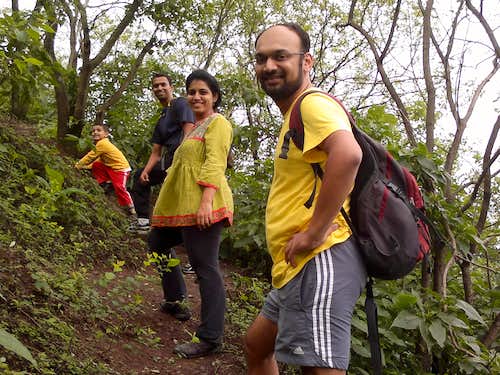 Group pic on the trail

So, I sent out a message to my good ol' Tapowan group friends, with whom I had trekked to Tapowan, a high-altitude trek in the Garhwal Himalaya. Although everybody was enthusiastic and active in 2001, hardly anybody trekked now. 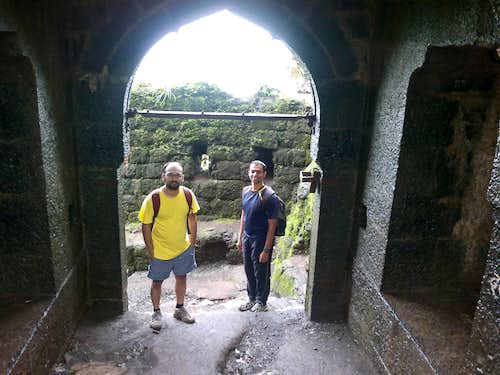 Amol and Amit
Amit and Amol agreed to come. To my surprise, even kaka and kaku (my in-laws) agreed to come. I had decided on going to Purander, a hill-fort @ 50 kms from Pune. It also had another fort nearby called Vajragad, where we all had gone and rapelled a big rock face in 2001. At that time, Purander was just like any other fort, except it had a small Army camp. 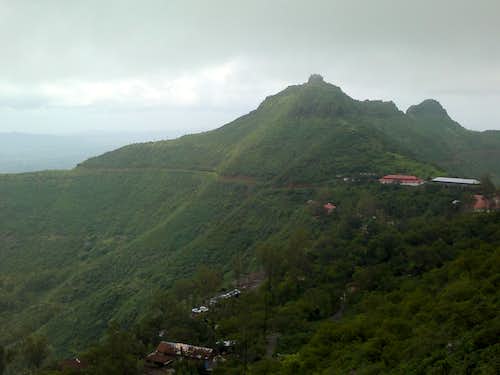 Vajragad, with the Army establishment 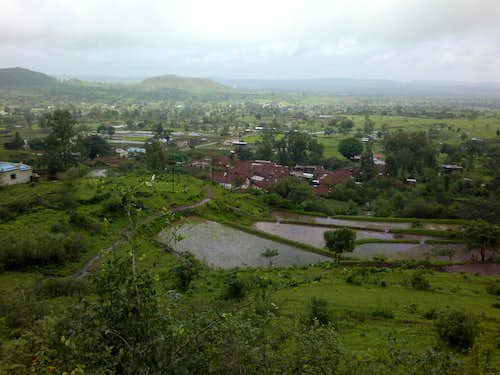 We drove out to Saswad in the morning, and took the detour to Narayanpur, which is the village @ the base of the fort. After we got off the car, kaka and kaku joined us, and told us that they would be going all the way up in a car, as kaku's knee was not in the best of conditions. We started trekking up the mountain, crossing small streams, going through rice fields etc. It was rainy season, so it was green everywhere! We could not see the fort, as it was shrouded in clouds. We hoped that it doesn't rain, which would make the trek even more exciting. 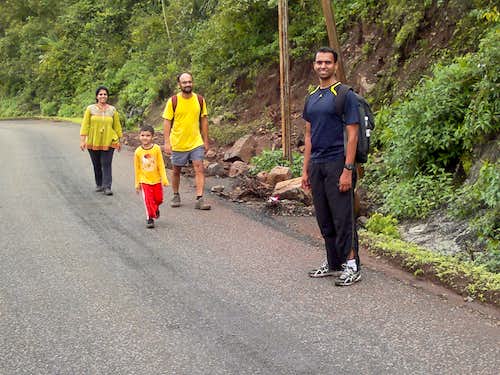 The road, which cuts through the trail
After climbing up the trail through some bushy patches, we reached a place where we face a wall, and we have to take a left to enter the fort. I remembered this, when I and Chaitanya - my cousin had come up here in 1998! We were just the two of us on the entire
fort. We took a left, only to face a landslide area, which had completely obliterated the trail. It was in the event of creating a road to the top that the trail had gotten screwed up. I tried finding a way through, as I knew we were pretty close to the gate, but couldn't. So, we walked all the way back to the wall and went on the opposite side, to finally get on to the road, which winded up the mountain. 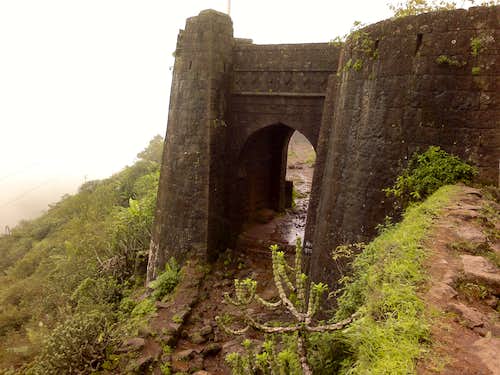 Enrance to the fort
The hike up the road was boring for all of us, including Yuvaan, as it considerably increased the distand we hiked. At the end of the road, we reached an entry point where an Indian Army guy was asking for identifications etc to go further. This felt really awful, as the sanctity of the fort was being taken over by the Army. But, nevertheless - this was better than private parties taking control of it. A short walk led us to the status of the famous warrior - Morarbaji. 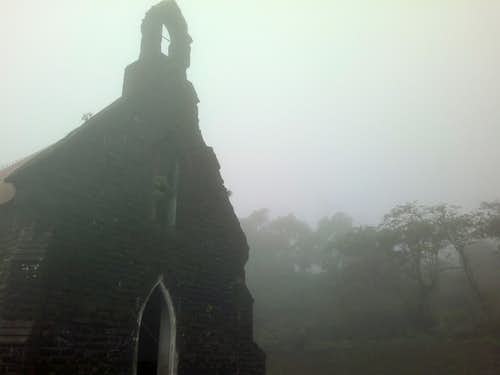 Misty
The sheer anger in the eyes, while in an attacking stance is enough to make your blood boil. We walked further to the old church on the fort, which has a map of India carved out in front of it. It was carved out by the British, and shows the Kashmir as an undivided state of
India. 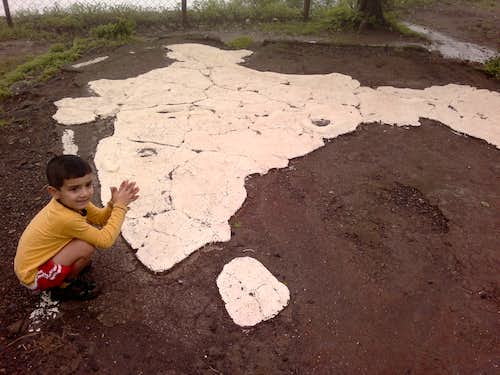 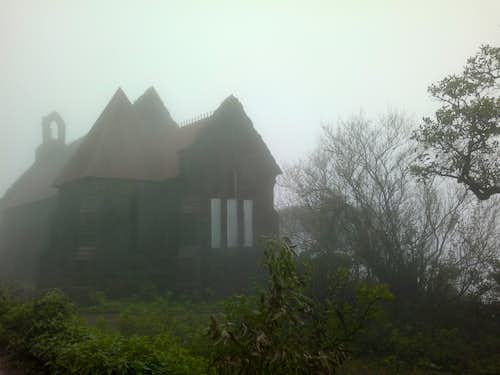 The church
I've been there
twice, but nowadays, the Army doesn't allow people to venture in that direction. It has two beautiful ponds from which you can drink the water, and
its got a huge wall, @ 120 ft tall, from which we had practised rapelling. Manasi had rapelled for the first time in her life on Vajragad. 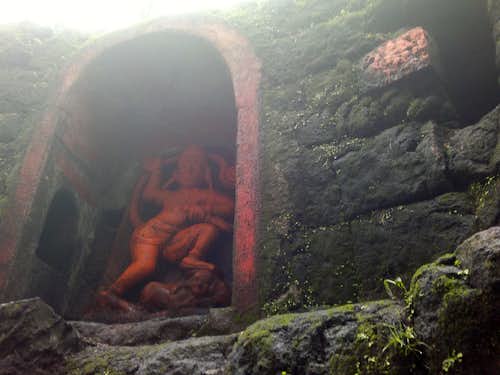 Maruti Temple - a very common sight on all Shivaji forts

Around the barracks, a trail goes up to the top of Purander. This trail has been fenced by the Army, and one can't wander in the jungle anymore, as it used to be. When we started on the trail, we realized that kaka and kaku had already gone up. We could see their car parked at the trailhead. 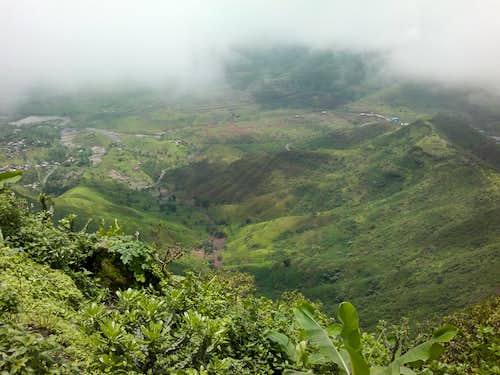 Valleys around
Slowly, we reached the top, and it was while we started climbing the steps towards Kedareshwar (temple of lord Shiva - there is one on each fort in Maharashtra), we saw kaka and kaku coming down. We pursuaded them to come up and join us in making and having tea and maggi. 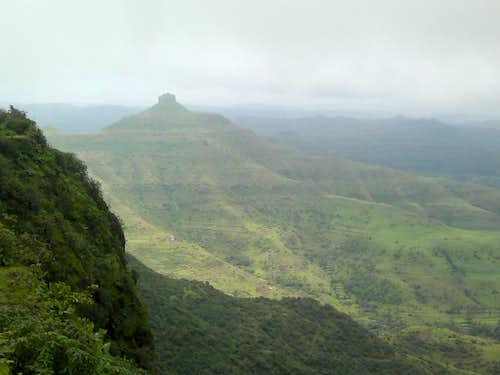 Vajragad in the distance
I stoked my MSR stove at the top, and we all had a hearty meal of maggi, followed by tea. We all had forgotten to buy milk powder, so we all ended up having black tea! With the chill in the air, slight rains, and clouds all around us - it felt warm and
nice. After the eating break, we descended. 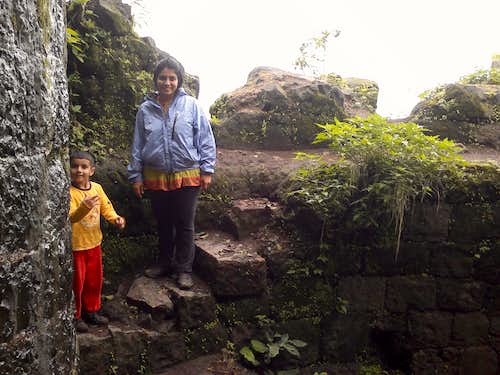 Manasi and Yuvaan
Luckily, after mid-way, Yuvaan opted for a choice he had - to go down in the car. We all met a local villager, who took us down the trail, which led to the landslide section. We navigated through it, and reached our car. Luck was so much by our side, that as soon as we sat in the car - it started raining heavily. 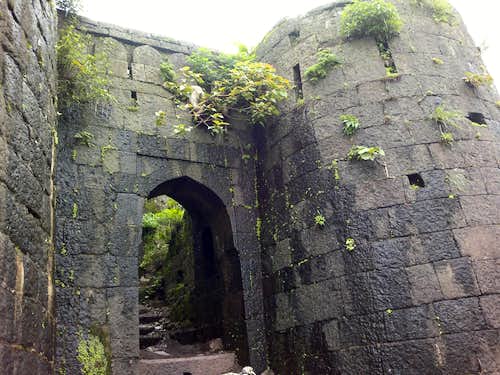 And so, I was able to at least initiate Yuvaan into trekking in the Sahyadris. Through visiting a fort, there are multiple things that one gets to learn - how did the people build it @ that time, at such an altitude, with what materials so that it stands firm today as well - nearly 400 years later! How was the defense mechanism employed while constructing the consecutive doors at the entrance, how did the soldiers used to fire at the enemy from the slits carved out in the walls specifically for
that purpose etc? Another speciality of all Shivaji forts was the presence of an idol of lord Hanuman - that too, with a tail so long that it goes above his body.

Overall, a great trek - which we all enjoyed every bit of.