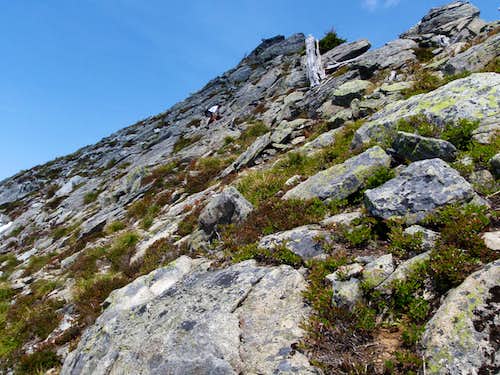 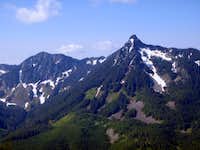 Putrid Pete's Peak is a minor summit of the I-90 corridor located on the ridge line between Web Mountain to the west and Mount Defiance to the East. Known to some as P3, it was named after the famous Himalayan veteran Pete Schoening (see history section). If you want to see what he looked like there is a photo of him in the summit register. The register is located under a large flat rock on top of the summit block. Unlike it's nearby neighbors, P3 is not a popular destination and many local hikers are unaware of it's existence. The hidden nature of the trail leading to the summit might be one such reason for this oversight. If you are thinking of attempting P3, you should be comfortable on steep loose dirt and semi-exposed class 3 scrambling.

Pete Schoening (1927-2004), a Seattle native, was a classic example of the type of mountaineer that can be conditioned out of living in proximity to the Cascade Mountains. During his life he made several expeditions to the Himalayas and is best known for his famous belay on K2, August 10 1953. While lowering the injured Art Gilkey, George Bell lost his footing and if it hadn't been for Pete's successful belay, him and the five other climbers would have surely plunged to their death. When Gilkey realized that his injury was risking the lives of the other climbers, he cut the rope. This legendary belay is likely the most famous in mountaineering history. For more information on this story see the book K2 - The Savage Mountain by Charles Houston. Pete completed 5 of the seven summits and remained an avid mountaineer until the end. It is likely that the summit register containing his picture and autograph was placed on the summit of P3 by himself or his family in 2001.

From Seattle, take I-90 E to exit 45. Cross over the freeway and take road 9030 left to a junction about 1 mile down the road. Follow road 9031 to the left for another 3 miles until you reach the parking lot for the Ira Spring trail also know as the Mason Lake trail. As of June 2009 the road is washed out 1/10 of a mile from the trail head.

Begin at the Ira Spring / Mason Lake trail. Follow the trail 1/10 of a mile to the first switchback. Instead of turning to the right, continue forward over the sticks meant to block the way onto a faint path which quickly becomes well pronounced. After 1/3 of mile the trail begins switching back as it climbs steeply along the mellow ridge leading up towards the east summit. There are a few forks in the trail here so if in doubt, choose the fork leading up. This part of the route is similar to Mount Teneriffe or the old trail on Mailbox Peak. 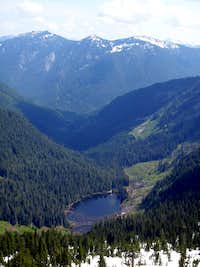 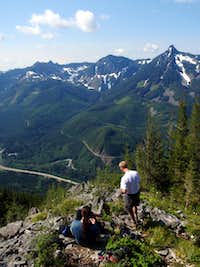 Around 3900 feet the switchbacks end and so does the easy to follow trail. Climb straight up the top of the ridge over steep terrain and loose dirt and rocks. There are signs of occasional use but nothing substantial. Exercise caution when coming down this part of the route. The upper half of the route is out of the trees and awesome views of the 1-90 corridor open up all around. Bear Grass and wildflowers frequent these slopes as well. The last 20 feet to the east summit is a class 3 scramble and possible one of the easiest scrambles on I-90. Just beware of the northern cliff face when on the summit.

Currently the road leading to the Ira Spring trail is washed out in several places. In a higher clearance vehicle, it is possible to get within 1/10 of a mile of the trail head.

NW Forrest pass required on vehicles at the trail head.

Special thanks to Redwic for his help in gathering accurate information to build this page.

Currently the road leading to the Ira Spring trail is in good shape. No problem driving to the end of the road (as of September 2011)