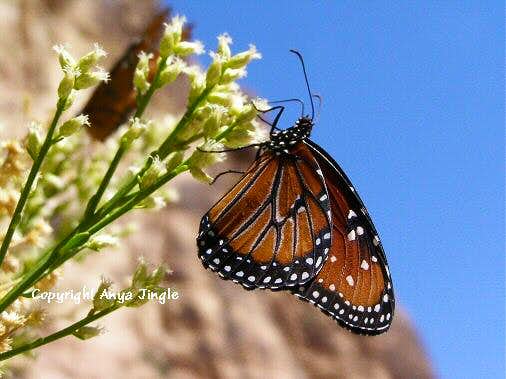 This is a Queen Butterfly (Danaus gilippus) sipping nectar in the South Fork of Pine Creek. Red Rocks, Nevada. September 2008. Queens are common in the US deserts as they love hot temperatures. Their favorite plants are milkweeds. Look for them in Red Rocks in summer and early autumn. Queens are native only to North and South America.
« PREV NEXT »

AJ !! My intention is not to cause a debate,
but this Queen is in the same Family/subfamily
as the Monarch Butterfly??

It looks larger (in size) and the wing patterns are more defined. They are also plentiful in the wondrous state of Utah. (Monarchs & Milkweed, that is.)

Thank you Larry. I believe Queens and Monarchs are related but I don't know how closely. We have Monarchs in Red Rocks also, but Queens are more abundant.
BTW, I enjoyed your shot of a Sphinx moth!
Take care,
AJ

The Queen resembles its close relative the Monarch butterfly (Danaus plexippus) in various ways, but is smaller and the ground color of the wings is a darker brown. The forewings are long, greatly produced at the apex, and have a triangular outline. The hindwings are well rounded and smaller than the forewing. Black veins with white borders appear on the entire length of the hindwing while the forewing is not bordered with black on its inner margin like the Monarch. The light spots on the apex of the forewings are whiter and patterned differently than those of the Monarch as well. While male Monarchs are often the larger sex, in Queens, the female is larger. A Queen's wingspan averages 3 inches. Generally, this genus of butterflies (Danaus) has eggs which are ovate conical, broadly flattened at the base and slightly truncated at the top, with many longitudinal ribs and transverse cross-ridges. In the caterpillar stage, they have a small head and large, cylindrical, hairless body with dark stripes. The chrysalis is short, thick, rounded, tapers very quickly over the posterior of the abdomen, and is suspended by a long cremaster from a button of silk. It is frequently ornamented with golden spots. Member of this family have antennae that are unscaled. (Ehrlich and Ehrlich, 1961; Holland, 1907; Pyle, 1999)

By the way this is an awesome shot as well!

Thanks for adding. Interesting indeed, especially this : "while male Monarchs are often the larger sex, in Queens, the female is larger". Now I know how to tell their gender as some of the Queens I saw that day were much smaller than the others. The one in my photo is definitely a female.
Cheers.

Nice to see that you are still out and taking photos.

Re: great pic as usual

Thanks Harlan. Yes, I am always taking pictures and holding the camera. That may be the reason why I ended up with a carpal tunnel. Had to cut back on computer/web design stuff, but still hiking as always. Cheers.

Another one of your beautiful photos, and you have so many.

Thank you Marc. It's one of my favorite butterflies in Nevada.

Your quote is "right-on" about butterflies
being enchanting & approachable!

But ... isn't there such thing as getting
TOO MUCH sunshine? Take care, Anya.