This summer I watched the first season of FX’s new crime drama The Bridge.  The show takes place on the border of El Paso and Juarez, so this area of the world had been on my mind quite a bit.  So when a short weekend opened up for some high pointing Guadalupe Peak via El Paso was my first thought.

Joined by my high pointing partner and cousin, Jeff, we woke up early on Friday Sept 20th and grabbed the first flight out of NYC and arrived in El Paso around noon local time. Determined to make the most of this short vacay we set straight out in rental towards White Sands, NM.  We first stopped at High Desert Brewing for lunch in Las Cruces since I always check out local beer scenes wherever I travel.  It’s a divey place in a depressed town but they had a cool patio where people brought their dogs, I had green chili chicken sandwich and the beers were decent.  We hit our first border checkpoint on the remainder of drive to White Sands, which was a new experience.

White Sands National Monument is a really unique otherworldly kind of place. It’s the largest gypsum dune field in the world (275 sq miles) so if its gypsum you’re looking for this is the place. 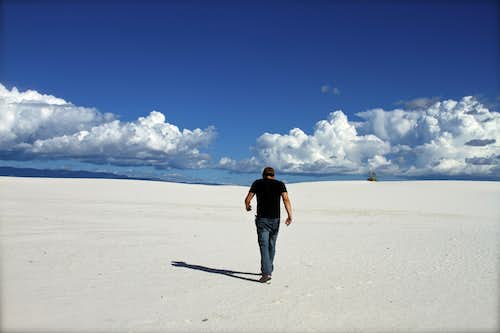 We did a short 1 mile nature hike and there were these awesome white lizards hanging around.  As someone who subscribed to Reptiles Magazine as a child this was a cool find. 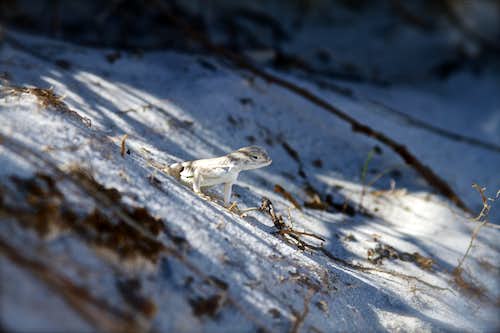 Surprised there is any life in this kinda place. 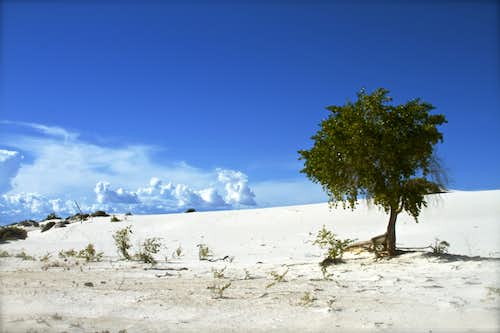 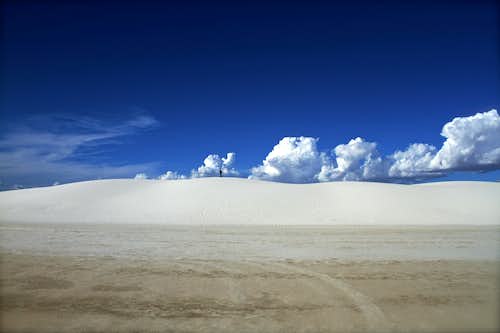 We drove around and explored the park some more and ran up and down some dunes. Some people go sledding down the dunes. We got some cool photos and it was really hot.  The fact you can wake up in New York City and be at a place like this in the afternoon is pretty amazing.  We headed back to El Paso where we had dinner at The Hoppy Monk which has really terrific food and amazing beer list.  For a beer geek like myself this place was incredible.

Woke up early and headed out to Guadalupe National Park.  We hit our second border checkpoint on the way.  Word of caution there is no gas anywhere near this mountain so fill up in morning prior to leaving city.  The ride is long and boring but you can really fly since its straight road with 75 mile speed limit. 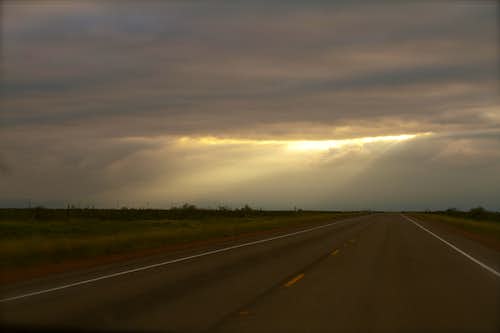 Saw a coyote cross in front of us.  We got to the visitor center right at 8am when they were opening.  It was so cloudy you couldn’t see mountain in morning and I feared thunderstorms however rangers said it would burn off and should be fine and they were right. 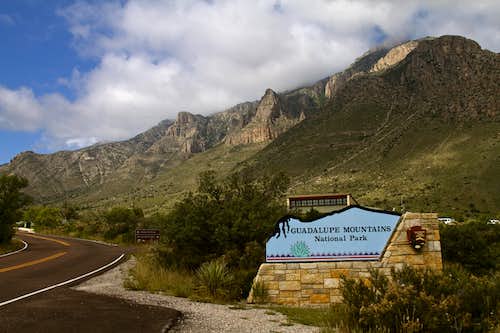 I got a new backpack which is bigger and I didn’t realize it holds double the water because I also brought a few extra bottles, I was afraid it would be as hot as the day before (it wasn’t), so in total I had double what was needed.  I also wasn’t sure I could carry-on trekking poles (you can), so the combo of no poles and overly heavy pack made this slightly more strenuous than it needed to be.  We headed up the trail in complete cloud cover and met an older man who had previously climbed this mountain 127 times or so, he was going slow and steady and gave us advice about a potential place we could make wrong turn which proved helpful. 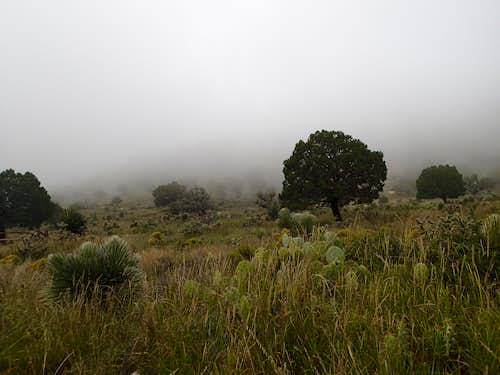 I dig this type of landscape since it’s pretty unique and lots of different forms of wildlife but I wanted to see a tarantula and rattlesnake most of all but they were not to be found. 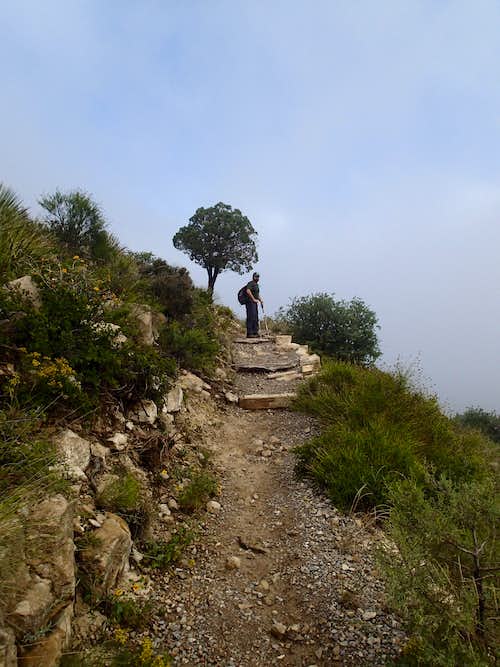 We stopped halfway up for some breakfast of pop tarts and buffalo jerky. 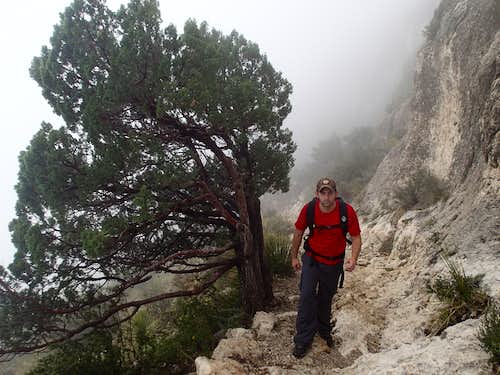 We had the trail pretty much to ourselves the whole way up. 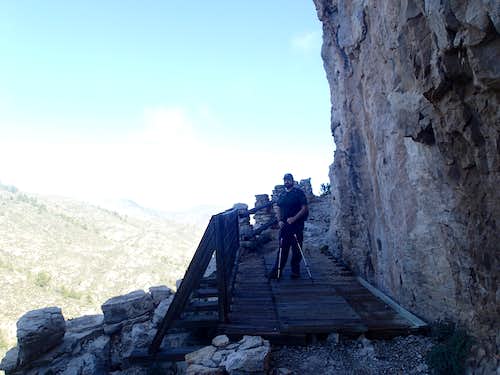 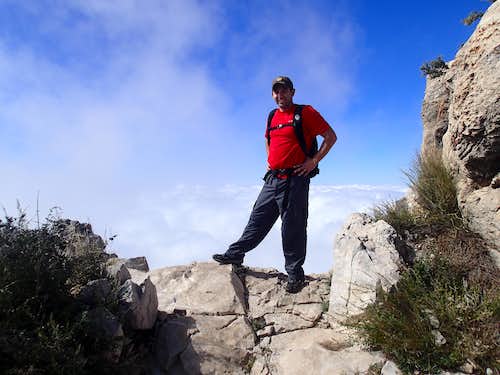 When we made it to the point where you should get view of El Cap it was so covered in clouds we couldn’t see it and we missed the photo you see in everyone else’s trip reports.  Made great time to top and we were second group up there this morning.  The other couple were surprisingly also from NYC but had left like 2 hours earlier than us because they like to go very slow and take lots of photos.  We were above the clouds so views weren’t to be had but it was very pleasant up there so we kicked off boots and chilled for a while, and enjoyed peanut butter sandwiches I made back in my NYC apartment.  Highpoint #29 for me and #25 for Jeff. 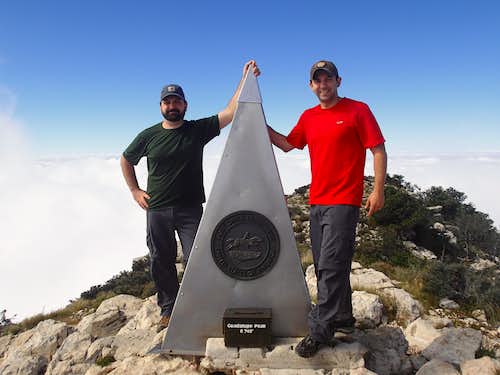 On the way down we passed tons and tons of people, I guess that’s what you get when you hike a famous mountain on a Saturday. 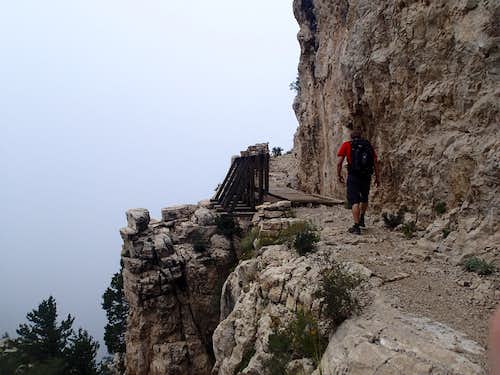 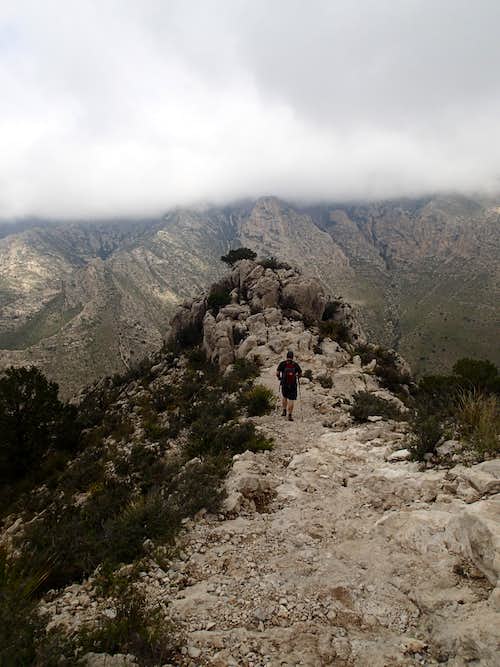 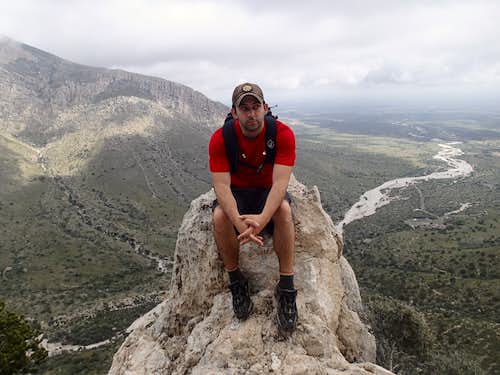 For some reason almost every one of them asked us how much further to the top the entire way 4.5 miles down, when the last group of girls asked me “How much farther?” I could clearly see the parking lot like a half mile behind them.


With the rest of the afternoon ahead of us we headed to Carlsbad Caverns.  It was later in day so they didn’t let us walk down the natural way to the Big Room so took the big elevator down. 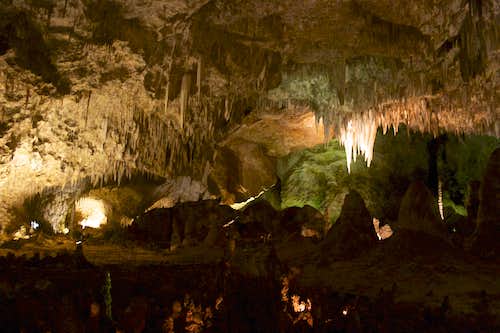 Pretty amazing cave system I couldn’t imagine discovering something like this.  Pictures don’t really do it justice. 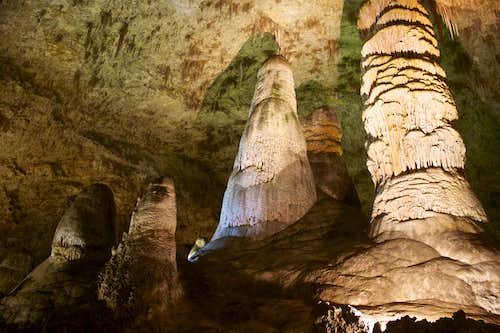 Coming out of visitor center a Rattlesnake slithered right passed the main doors to some rocks.  Very excited to see my first wild rattler even if it wasn’t in very adventurous setting.  With all the kids and tourists here this was a dangerous spot for him to be and I believe one of the rangers was going to try and move him somewhere.  We then got back in car to head back to El  Paso.

The day completely cleared up and when we drove back by Guadalupe Peak we finally got some decent shots of mountain. 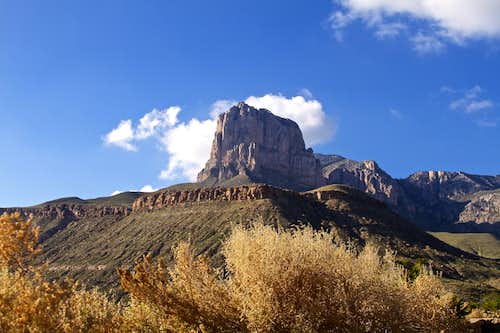 El Cap the only time we saw it 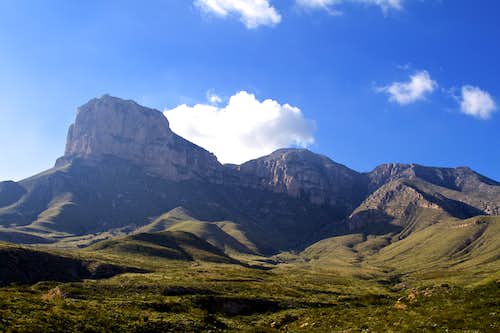 We also found this salt water bog which was cool especially with mountain in back drop. 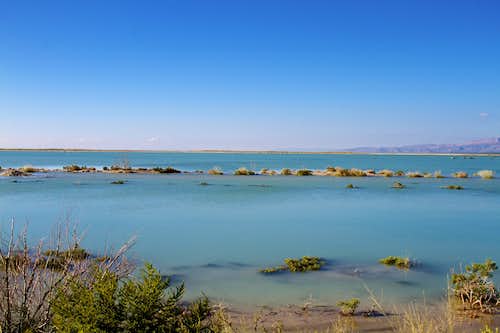 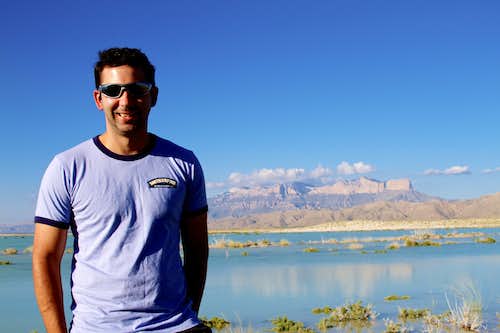 Jeff wanted to try Wattaburger which we stopped at prior to heading back to Hoppy Monk because I wanted Rabbit Tacos that I didn’t order night before plus with all goals accomplished (other than seeing a wild tarantula) it was time for a celebratory beer.
Took flight back first thing Sunday morning and was back home around 2:30pm.  We were in southwest for less than 48 hours but really saw and did a lot; the varied amount of terrain was amazing.  If I had more time there is other hikes that could have been done not to mention heading down to Big Bend.  When I told people from work I was going to El Paso for weekend most them just looked puzzled and asked, “Why?”  But if I show some of these pictures they have to admit it’s a pretty cool weekend getaway.

You took some great pics. Guadalupe is one of our favorite hikes with among the most spectacular views. It's one of the most highly underated parks. Glad the trail was open for you.

Joe, I am sure we ran in to the same guy on the trail on my trip. He had climbed the mountain 133 times and had a radio...volunteer trail steward? He saw my highpointers cap and stopped to talk about highpointing.

You packed a lot into a weekend. Congratulations!

Yup that's him he must have climbed the mountain 3 or 4 times between our visits. thanks

Sounds like you had a great time Jow. I enjoy your trip reports.

Sounds like a great trip overall! When I was there I wanted to check out the caverns but I will have to do those the next time im around. Great pics!

I liked your last line, "When I told people from work I was going to El Paso for weekend most them just looked puzzled and asked, 'Why?' ". Living in Arizona, I get the same reaction from people here about trips to other parts of the southwest. I think people have it in their heads that the southwest is just long, flat sand deserts with occasional cow skulls and cacti, like in the Roadrunner cartoons.

Glad you saw a snake too!