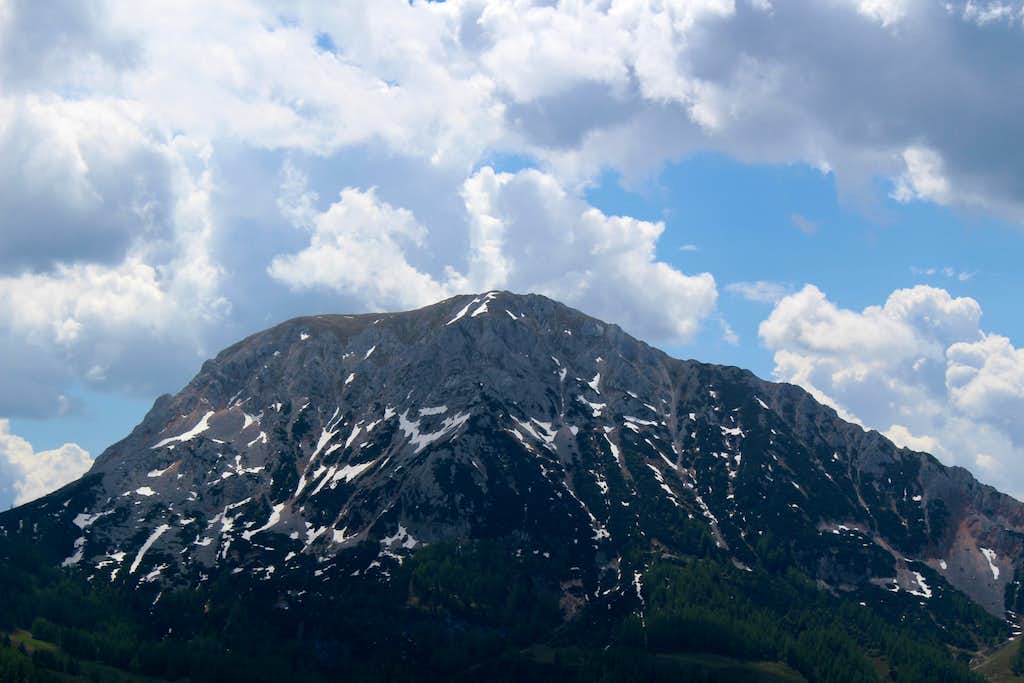 Lying to the north east of Filzmoos and overshadowed by the main ridge of the Dachstein mountains, the Rötelstein overlooks the Hofalm valley which runs southwards from the Grosse Bischofsmutze towards Filzmoos.

The mountains in this area are dominated by the “Dachstein Kalk”, a grey Karst Limestone laid down in the Triassic age. In contrast to the predominately grey Limestone peaks surrounding it, the Rötelstein is made up of broken amber/red nodular limestone rock – hence its name.

At a modest 2247m, the Rötelstein has no rock faces to climb but the ascents by either the North east or South west ridges are a pleasant scramble on variable rock. 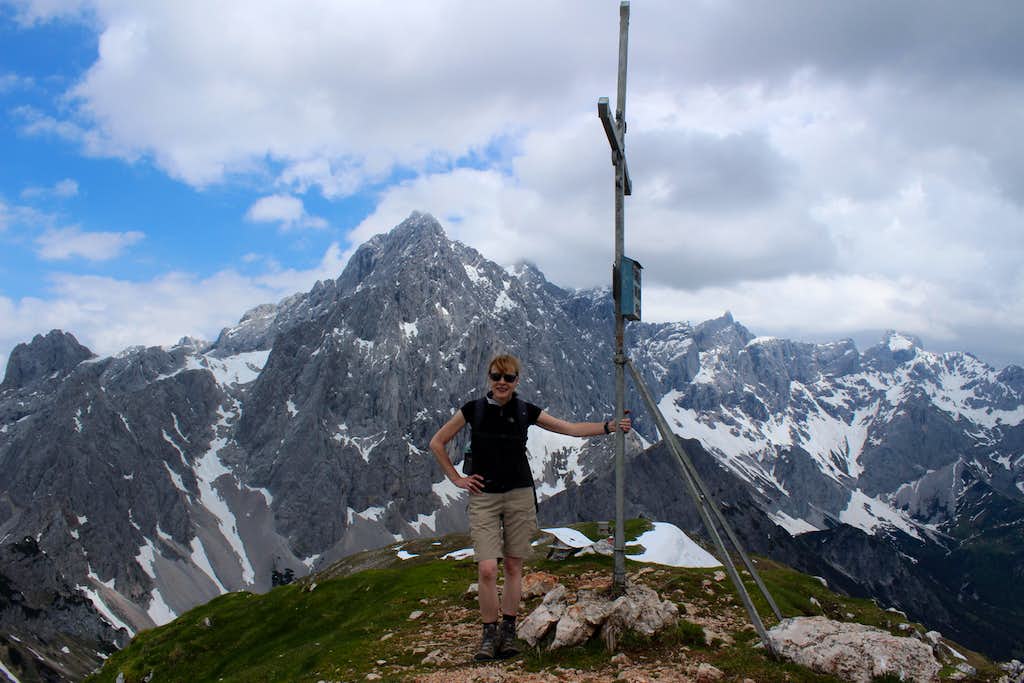 Filzmoos – From Salzburg - Drive South from Salzburg on the A10. Turn East onto the Filzmooserstrasse just after Gasthofberg and follow this to Filzmoos.

From the East – Drive westwards along route 320 to Schladming. Head North on route L711 (Obertalstasse) towards Ramsau and onwards to Filzmoos.

It’s possible to catch a train to Schladming or Eben im Pongau from Munich, Salzburg, Vienna and many other stations.

Local buses and taxis can take you on to Filzmoos. 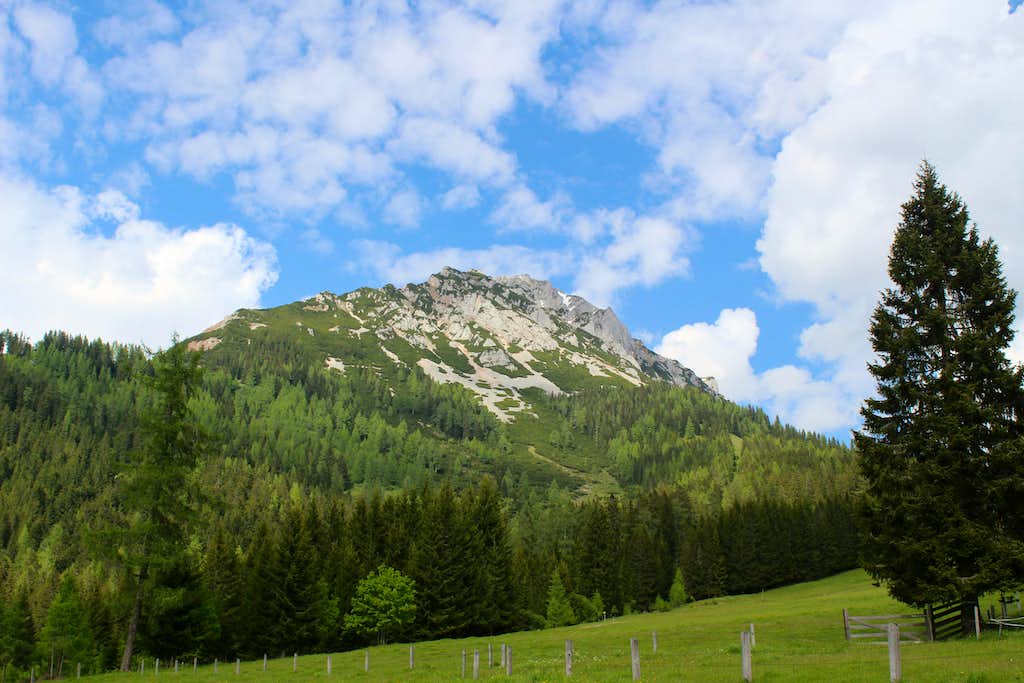 To start, it is possible to drive from Filzmoos to the Rettensteinhutte (only open in Winter) where there is limited parking.

There is also an occasional “Wanderbus” that goes to the Rettensteinhutte. (See timetables locally)

From here, walk south a short distance until the junction with path no 670 is reached on the left.

Alternatively, walk from Filzmoos in a northerly direction and follow signs to the Gasthof Reithof and Rettensteinhutte. Take path no 670on the right after the Haidegg farm but before reaching the Rettensteinhutte.

(The Haidegg farm was the former home of celebrated local author Barbara Passrugger-Hofer – 1910 - 2001).

Follow path no 670 in a north – easterly direction passing through a mix of woods and alpine pastures until at the Ahorneggalm, a signpost directs you onto a path leading to the right and up the south west ridge of the Rötelstein.

At first, the route is a stone covered path as it passes steeply through some low growing trees before it emerges onto the crest and some rougher rock.

Here some easy scrambling is required as the way ahead alternates between rock and grassy slopes.

As the height gain increases, so the views get better with the Grosse Bischofsmutze (2454m) dominating the scenery to the North. The views to the south and west look over steep, broken rock to the predominantly tree covered hills at lower altitudes.

After approximately 3 hours from Filzmoos, the angle of the ascent decreases and the summit cross is visible a short distance away on a rocky outcrop on slightly higher ground. Behind this is the huge bulk of the Dachstein ridge with Torstein (2948m), Mitterspitz (2925m) and Hoher Dachstein(3004m) seemingly very close.

Below the rocky knoll of the summit lies large, open, grassy slopes before the steeper ground to the North and the top of the north east ridge 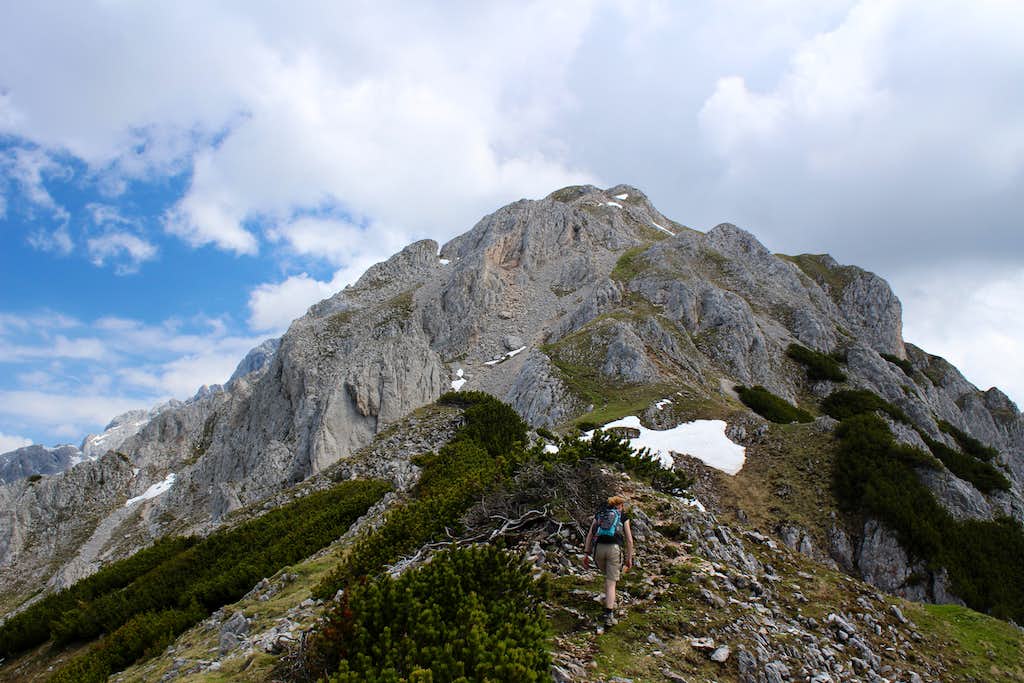 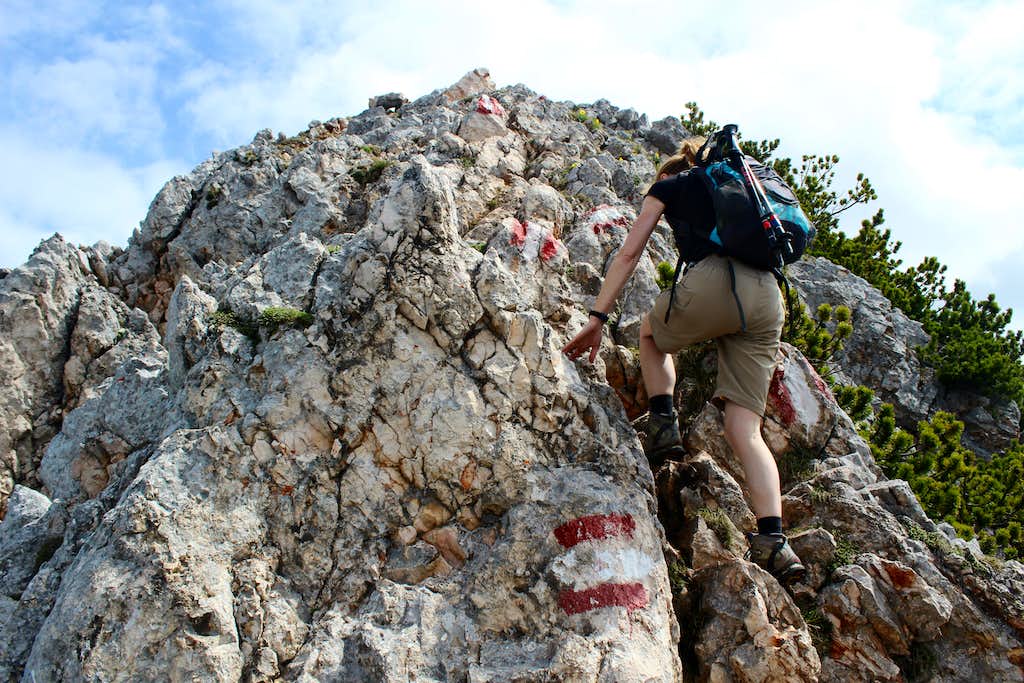 From Filzmoos, get the bus eastwards to the Dachsteinruhebus stop. (There is also limited parking nearby). 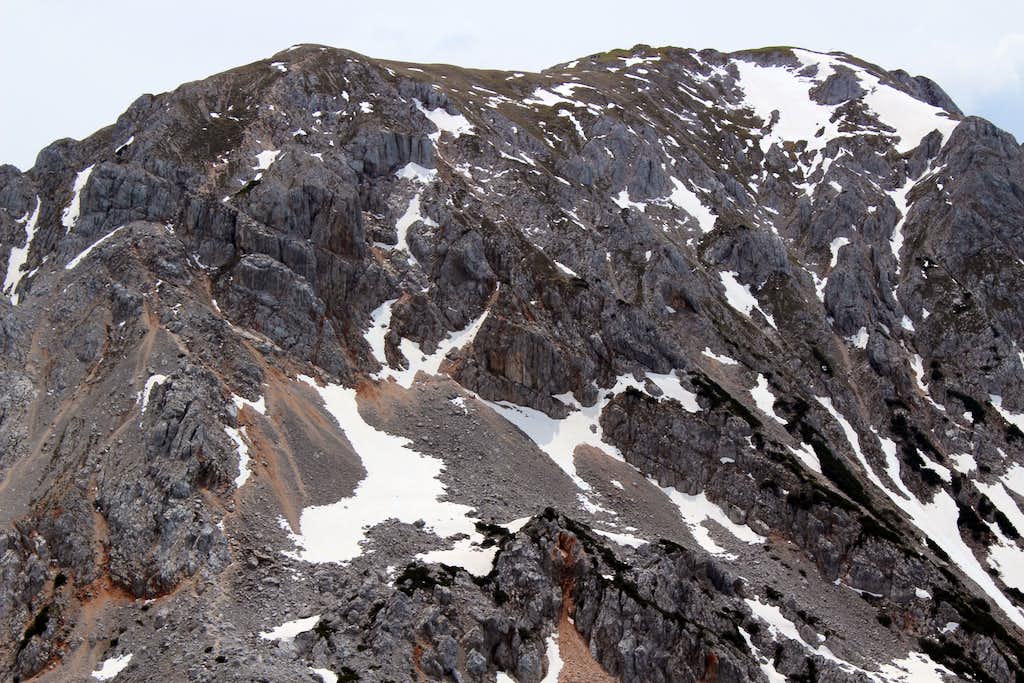 From here, follow the track to the Bachalm, a hut lying approximately 370m above you by walking up the steep, gravelly, hairpin – bend road!

Alternately, the Bachalm often runs a mountain taxi service from the junction of this road with the main road and this will save you about 30 mins walking time.

On this ascent, before the Bachalm is reached and at a sharp left turn in the road, paths 614/638 head off up the shallow valley to the north west. The Raucheck (2192m) is immediately above you to the north at this point, with Torstein lying behind it.

When the paths split, follow no 638 (on the left) eastwards towards the Sulzenhals on the the shoulder of the Rötelstein.

At the Sulzenhals, head steeply up the north east ridge.The route is well marked but is a mixture of scrambling on the burnished, broken rock and negotiating areas of scree which make it less enjoyable as an ascent route than the south west ridge.

The route arrives at a rocky top then ascends the open,grassy hillside towards the rocky outcrops and the summit cross. 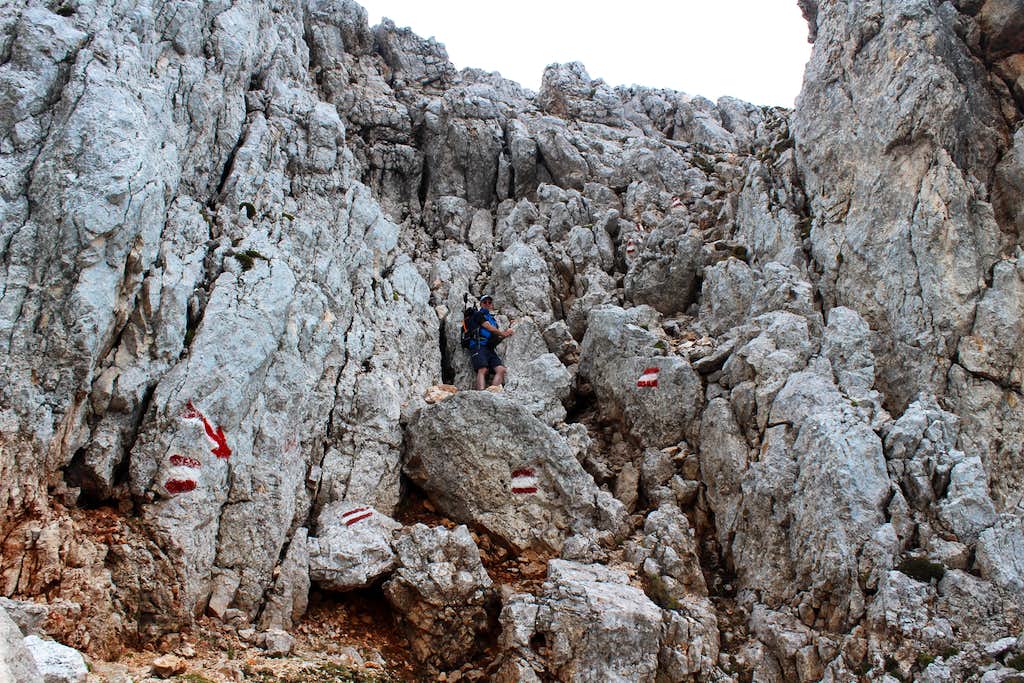 This route can be walked as one continuous circuit or the two individual parts (North or South) can be used separately as parts of the many other enjoyable routes that can be undertaken in this area.

The highest point of the circuit is at Sulzenhals (1827m) in the north whilst the lowest point is at the Reithof (1190m) in the south or Filzmoos(1057m) if you are taking that as your start point.

Whichever direction you decide to travel in, the walk and the views are excellent. If I were to choose, I think I would ascend the south side to Sulzenhals, then descend the north side back to Filzmoos.

Total time for the circuit is about 6 hours.

From Filzmoos, follow the route to the Rettensteinhutte as described above. 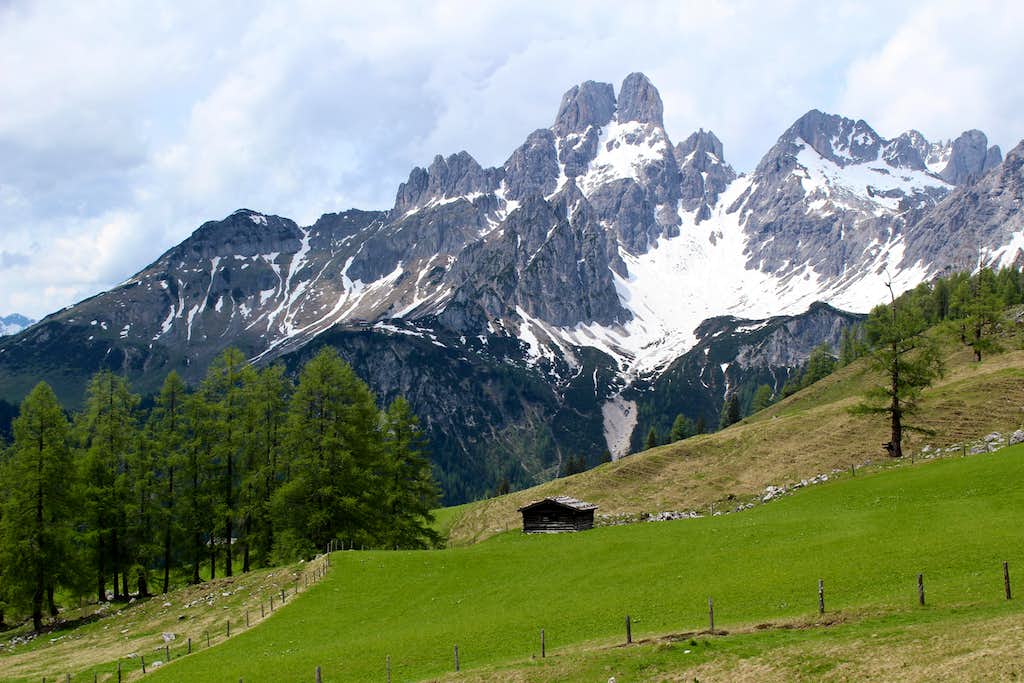 Continue on the gravel track shown as no 31c on the map,soon you will move from open farm land into woodlands. The way continues to contour around the Rötelstein with a gradual upwards trend.

Every now and then it’s possible to catch glimpses of the Grosse Bischofsmutze in front of you to the north, whilst the high ground of the Rötelstein remains on your right.

When the track splits, be sure to take the left hand route to continue on path no 31c/638. (The right hand track would take you up to the Reitalm and then back south).

The track soon vanishes and the path now takes you up and emerges from the woodlands near the Mandlinghofalm. From here, you will have a view back to the north side of the Rötelstein as well as the Grosse Bischofsmutze which looks more impressive the higher you get.

From here the route is on more open, grassy slopes than previously but does get steeper as you pass the Krahlehenhutte and Sulzenalm and turn to the east at around 1600m.

From here, it’s possible to take a detour up to the Eiskarlschneid (1990m), a grassy top with a seat and fantastic views of the mountain ridge which runs from the Grosse Bischofsmutze in a south easterly direction towards Torstein and the Dachstein peaks beyond it. 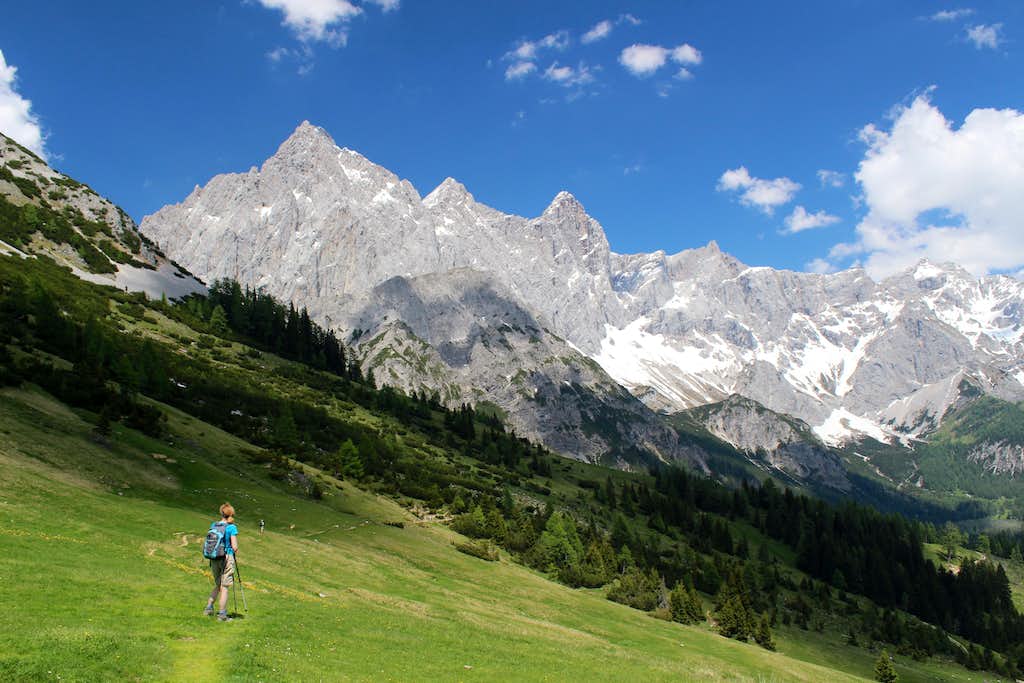 This part of the route travels through attractive houses and farms with a number of open views to the south. The fields here abound with wild flowers in the spring and early summer. It’s possible to stay on the tarmac road (38a) although a shortcut travels through the woods up to the Weitenhausalm (38c).

After this, cross the road to continue upwards steeply on open ground on path 39a/671. The whole route so far has been running parallel to the Hammerbach river on its northern side. This route takes you up to the Nosslerrieidel, a ridge at 1646m.

From here you are descending in an easterly direction towards the Bachalm at 1490m. This is a very open hillside with fantastic views of the Dachstein mountains in front of you.

From the Bachalm, continue on the gravel track towards Schaidlam but at the bend in the track, turn leftwards on path 614/638 towards the Sulzenhaus.

Late Spring, early Summer (when the majority of the snow has melted) through to Autumn. 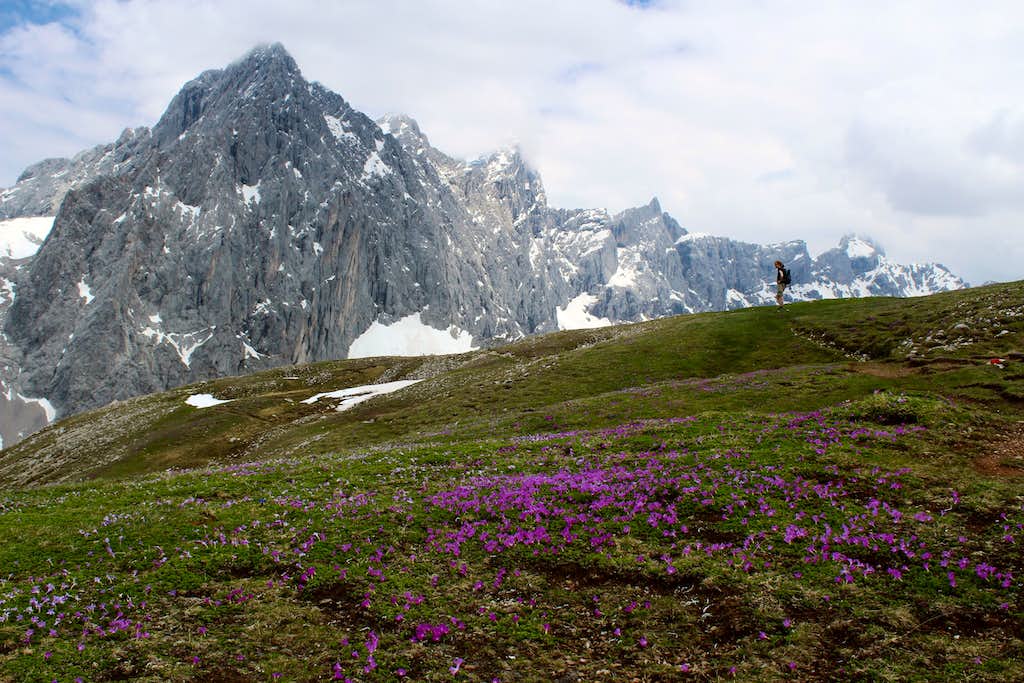 A Winter ascent would be possible with Ice axe, Crampons etc but local knowledge of the snow and avalanche conditions would be essential

Many Hotels and Pensions in Filzmoos