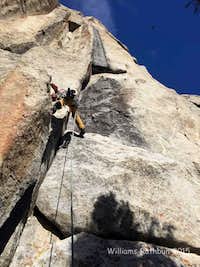 No Satisfaction, 5.8, 1st Pitch
Rabbit Rock is one of the larger features in the City of Rocks. Its name is derived from a much smaller feature off its southwest corner that looks very much like a rabbit from a certain angle. They call this smaller feature Real Rabbit Rock and the massive wall behind it Rabbit Rock. Bingham’s guide book breaks Rabbit Rock down into three walls, Northeast, West and Southwest. The west wall is much more popular and has more routes. The north wall is the most difficult to reach and thus offers the more remote climbing. The Urioste family and I had it to ourselves on a Saturday during Memorial Day weekend. The south wall has the most infamous route on Rabbit Rock, Redtail, 5.11a, a bolted quartz seam given four stars in Bingham’s book. No Satisfaction, 5.8, is the only moderate on the wall and is a two pitch gear route that takes you all the way to the summit where you have to walk to the very north end for a single 70m rap.

From the east side of Parking Lot Rock, descend the hill and cross the wooden bridge. Fairly immediate, head up the climbers trail on the left to the base of the routes. No Satisfaction is much more striking to look at then it actually climbs and its upper hand crack corner is easy to identify (photo).  The first pitch of No Satisfaction starts just under the water streak.   Redtail starts just below an arête to the right of the water streak.