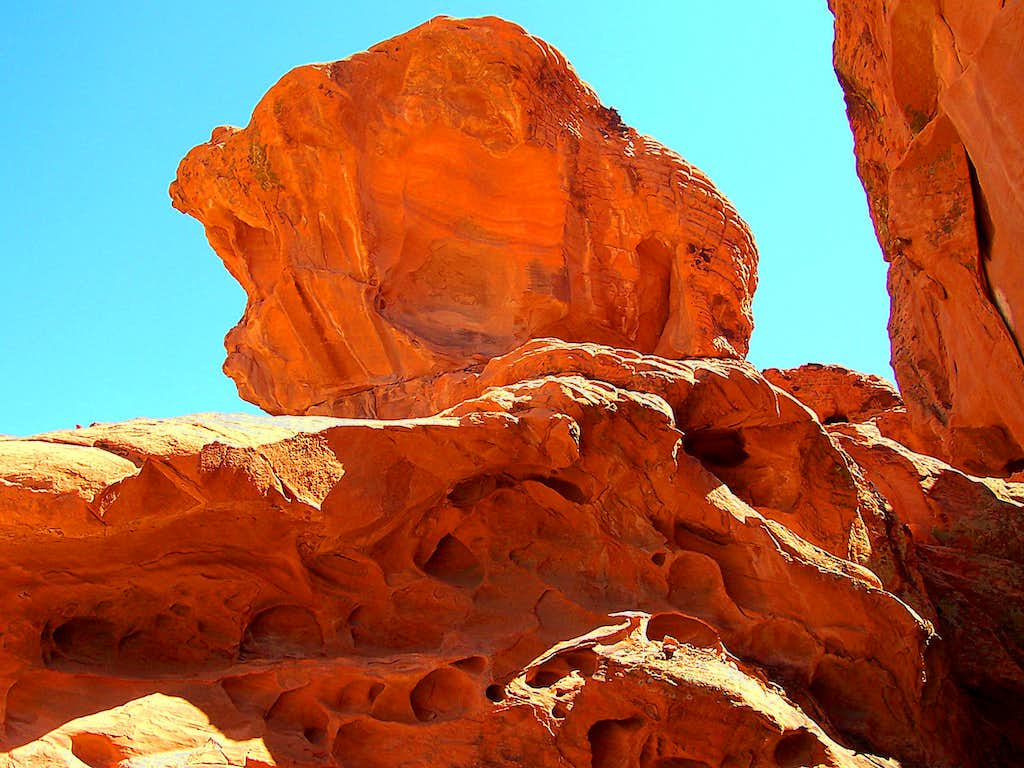 Nope, it didn't come out of the sky! Just a formation that can be found in the Redstone Dunes of Lake Mead National Recreation Area in southern Nevada. What? What was I doing there? I was just watching the sunlight play on the rock. This sandstone was formed between 65 million and 250 million years ago. (That was way before cell phones and Snickers bars came along!) Are there restrooms and picnic tables nearby? Yes, this is part of an interesting loop hike or trail, that begins at a signed parking area at Mile Marker 27 on Northshore Road. Why are the rocks RED??? During the age of the dinosaurs, these bright sandstone formations were part of a great sandy desert stretching to what is now Southern Colorado. Minerals cemented the shifting sand into stone. "Rusted iron molecules" give the stone its brilliant red color. (A bit like the album title of Neil Young's classic performance, "RUST NEVER SLEEPS.") Most animals living in this harsh landscape come out only at night. Look carefully in the sand, and you'll be able to find tracks of lizards, kangaroo mice, beetles, and maybe even kit foxes or coyotes. When I was here for a short time, I saw several birds and lizards. Perhaps the next time I visit this area, I'll capture a photographic image of them. But for right now, I'm left with this rock. Do you have a flexible imagination? Doesn't it resemble a face with the mouth wide open? (Somebody waiting to have a tooth pulled?) It was radiently beautiful, and that's why my mouth was open as I looked upon it. Lake Mead NRA in March 2008
« PREV NEXT »