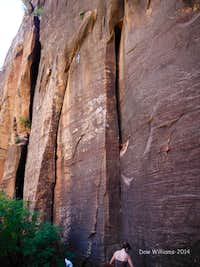 Teflon Dog and EZ Bonik, 5.10's
Chasing shade on a hot Memorial Day, my wife and I decided to visit the northwest facing routes on the lower reaches of the Great White Throne. This small group of climbs sees little traffic and are less popular then their west facing brethren around the corner. Unfortunately they do not face as north as we would have liked and the sun caught up with us mid-afternoon.

Rain, along with Box Elder Jam, Free Bird, Crack of REM and Nemesis (first recorded 5.11 in the park) were established by Jim Beyer and company in 1979. The two pitches on Rain, in my opinion, are every bit as good as the pitches on the Headache, just less clean obviously. Its close proximity to the road should lend to more moderate climbers getting on it if they knew about it. The first pitch is up an obvious cool corner with a fun roof squeeze/mantel, all well protected.  A box elder tree splits the route. The second pitch reminds me of the upper two pitches on the Headache. It takes all the gear you have to place, with the most consistent pro at C4#3. On approach, the pitches look shorter than they really are. They are both right at a 100’ in length. The route stays shaded in the summer until mid-afternoon.

You can get off the bus at either the Grotto or Weeping Wall or if you have direct access to the road, use a pullout on the south side of the road at a deep bend into the wall.  At least a 100 yards east beyond where the west wall meets the northwest wall, look for a short wall with a significant roof and box elder growing right out of the wall at the roof line (photo included). This is the middle of Rain. Easy, but sandy, slopes lead up to the base of the climb. 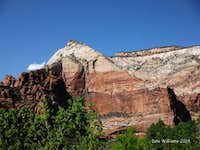 1st Pitch- 100’- 5.9/ Climb the hand crack in the blocky corner up to the roof, make a crux squeeze/mantel through the roof. Great gear all the way. After the roof, one short face move gets you up to the tree. Climb past the tree to the base of the wide crack above. C4#4 up high is bomber for the gear belay.

2nd Pitch- 100’- 5.9+/ This is a much more sustained pitch. Chimney up the first meter or two and climb the wide hands splitter to the top. Take extra C4#3’s if you want to sow it up. The finish is easy ground up left and then back right to the second ledge which has the hidden bolted rap.

I re-slung the two bolt rap in 2014. Double 60m ropes to the ground (watch out for a hidden cactus at the base when you pull your ropes).

Single rack C3#.5 to #4. Doubles #2 to #4’s. Triple #3’s. I placed no wires and did not have that big of rack and got along fine. Double 60m ropes for the rap. You could do a mid-station at the tree if you wanted to do it with one rope and leave a sling. Mostly a spring, fall or summer route. This is a good one to combine with several short trad routes on the west side of the base of GWT.