On August 9th, 2003, my friend and I headed down from Washington DC to North Carolina. The trip was longer than I expected. North Carolina is mostly a flat state and I didn't see any mountains until I was near Hickory, some 250 miles west of the Atlantic Ocean. We drove to the Mt. Mitchell trailhead from the east. When we arrived, it was nighttime. We got there late due to traffic between DC and Richmond, Virginia. For this reason, we made an error in finding a place to camp. We ended up camping 25 miles away from the mountain. The next morning, we took the Blue Ridge Parkway down to the Black Mountain Campground. We got off on rt. 80, and saw a sign on 80 North pointing to Black Mountain Campground. The road we took is forest service road 472. From 472 it was only 2 or 3 miles to the campground and the trailhead.

To our surprise, the Mt. Mitchell trail was pretty rustic, covered in roots and rock, with stream crossings and plenty of switchbacks. Not what you would expect from a tourist mountain. During the entire hike, we only saw one group of people on the trail. There were very few views up the trail. However, the trail is pretty well marked and easy to follow. The smell and the feel of the woods was something unique and fresh. North Carolina has done a good job keeping this wildnerness undeveloped. 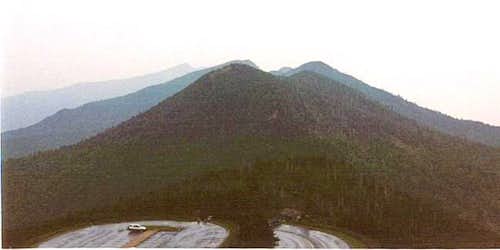 View to the Black Mountains from the summit

Once we got to the top of the trail, we looked up to the left and the summit tower was only 50 yards away. The parking lot was just below us for those of us unwilling to take the long trek.

From the view at the top, we realized that we were on a very high peak. The surrounding mountains were pretty steep, and the lower mountains seemed far far below. You can also see the Black Mountain crest, including Mount Craig just across the way. These are all the highest mountains in North Carolina, with five peaks over 6,570 feet.

Views from the peak that day were pretty nice, although I imagine they are better in late fall, on a clearer day than we had. The tops of the smaller mountains popped out of smoky clouds, that engulfed most of their expanse. These are the notorious smoky clouds that characterize the area (hence the name of the neighboring Smoky Mountain National Park, which incidentally was not particularly smoky a few months earlier when I climbed Clingmans and Leconte).


On the way down it started raining. First it was light, but it got heavier as we descended. As it got worse, my hiking partner was slipping and sliding. We both got pretty dirty and muddy, and knew we would have to sit in a car for 8 hours afterward......crap!

Mt. Mitchell was a fun hike despite the rain when we got lower on the mountain. If you go, do not expect the beauty you would find in the Appalachians of New England and upstate New York. Just appreciate these mountains for what they are.....very large tree covered peaks. This was my 21st state highpoint.