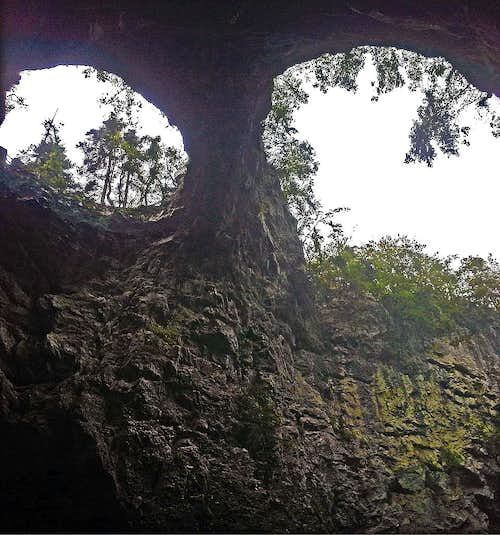 The Small Natural Bridge from below

This short page is describing a nice mountain valley in Slovenian Dinaric Alps. It should be attached to a more narrow mountain group, but that one is not existing yet. Otherwise the valley belongs to Javorniki mountain, which is mostly unattractive for mountaineering.

Rakov Škocjan has its name by a small river Rak and by 'Škocjan', which is an abbreviation of St. Kancijan, a saint which church ravines are standing nearby.

The Origin of Rakov Skocjan

North of the forrested Javorniki massif, there is an interesting, very nice karst valley, which is due to its features often visited by tourists and hikers.The valley is made of limestone from cretacious period, which is significantly eroded by water. Once the small river of Rak was flowing underground, close to the surface. But as water was eroding limestone, ceilings of broad caves collapsed, after wich water washed away most of debris. Some remains of cave system however stayed, now being shown as natural bridges. The whole valley is not more than 2.5 km long, the rest of Rak river flow is still underground.

The valley in high waters 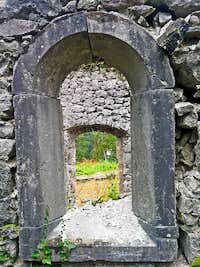 Rak river is flowing in the direction of "Dinaric tectonic faults", from south-east towards nort-west. So, its sources are on the south-east of the valley, in the cave system of Zelške jame. Otherwise, waters of Rak river are coming from the nearby Cerknica lake (Cerkniško jezero), but many tributary sources are also coming from the slopes of Javorniki massif. Once coming out of underground flow, Rak is meandring by the valley, flooding it in high waters times almost every year. That is why along the river there are nice meadows. On the north-west, just after the Big Natural Bridge, Rak is going underground again. Its waters are disappearing in Tkalca jama, some more than 3 km long cave system, which is underground finally joining the cave system of Pivka jama.

In addition to the valley itself, the main attractions of Rakov Škocjan are big natural bridges, collapsed caves and sinkholes.

The oldest archeological artefacts from the caves of Rakov Škocjan are even from paleolithic times. Near St. Kanciajn's church pottery and stone walls from iron age were found, showing that there might be an Ilyric settlement. During the raids of Turks (from 15th century on), people from the nearby villages were hiding in the caves and the first written evidence of St. Kancijan church is coming from the year 1526. The valley and its attractions were first time extensively described in the famous book of Janez Vajkard Valvasor: Slava Vojvodine Kranjske (The Glory of the Duchy of Carniola), (1689). 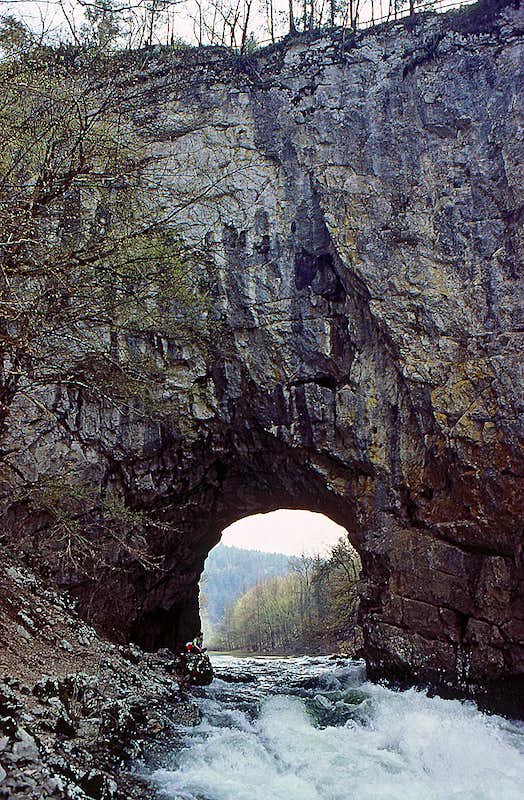 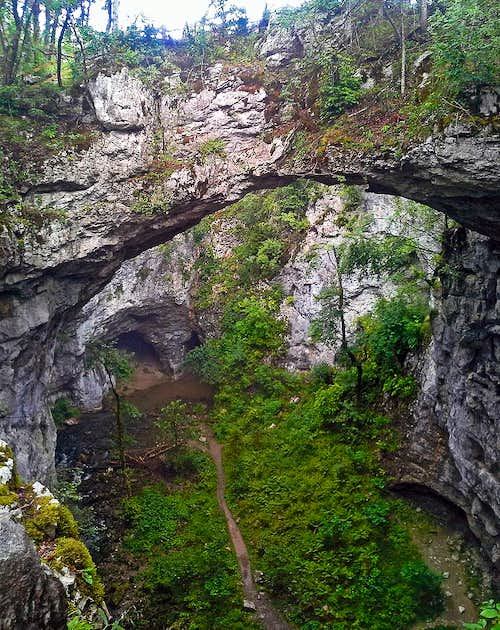 Zelške jame (caves). We can visit a caves system, passing underground by a good path from one sinkhole to another. The walls of collapsed caves are from 8 to 50 meters high. Through the system Rak river flows, but the interior of its source can not be visited without special equipment and permission.

Mali naravni most (Small Natural Bridge) is a narrow, but high bridge between two sinkholes. Its altitude is a stunning 42 m above the river bed. A good, safe path is crossing the bridge.

Veliki naravni most (Big Natural Bridge) is situated at the end of the valley. It is an impressive natural formation, a true landmark of Slovenia. The compact bridge is 37 m high, but after its arc there is a 23 m thick upper rock, which allows that even a road is crossing it. In winter 2014 the whole forrested area was heavily damaged by ice. When visiting the bridge in July 29th, heavy trucks were driving over the bridge, fully loaded with logs. Obviously still not dangerous enough to harm the state protected natural attraction.

Kotel sinkhole with an intermitted lake in it.

Tkalca jama (cave). It has been explored in the length of 2845 m. After that, Rak river forms and underground confluence with Pivka river and finally the waters of both are coming out on Planinsko polje (Planina karst field). Tkalca jama is having two entries and can be visited when Rak river, flowing into it, has not much water. In times of high water, the level of Rak rises considerably. In record times it was even to the top of Big Natural Bridge arc. At those times of course also the whole valley of Rakov Škocjan is flooded.

Water sources on the Javorniki slopes of the valley.

The ruins of St. Kancijan church. 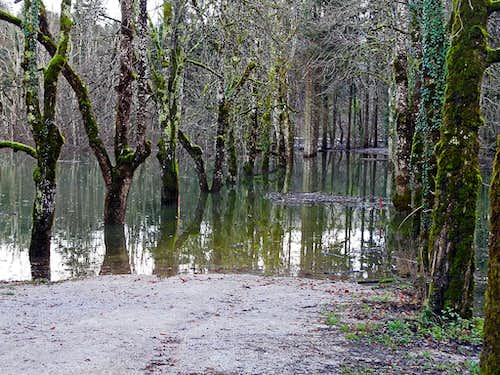 In some rare occasions, driving through the valley is not possible.

You exit the Ljubljana-Postojna highway at Unec. From there, Rakov Škocjan can be reached by forrest roads from two sides (well signed):

> If you drive from the highway towards Cerknica town, soon after passing Rakek village, you turn in Podskrajnik village right, drive through Zelše and in the woods. After a few kilometers the road brings you to the Small Natural Bridge.

Parking places are arranged in the beginning of the valley, at its end and by the hotel in the middle. But you can also deliberately park anywhere by the road through the valley. As you can do a round drive, it is most recommended to visit the valley by bikes. The biking tour can be combined with the panoramic biking which encircles the lake of Cerknica.

You can parc above, near the ruins of St. Kancijan church, or lower, on a bigger parking place. From the latter, you can descend to the eastern side of the bridge in a few minutes. There are also nice meadows. The western side can be also visited, scrambling a bit. Which side of of the bridge you will visit, probably depends of the light, falling on the rocks of the bridge.

From the parking place, you reach the top of the bridge in a few minutes. From there it is a stunning view deep down in the canyon, and on the path crossing it. There is, where we descend next. A steep path leads us right (towards the south-east) down into the nearby cave. Reaching the bottom, we can see on the right distant light - there the river exits the cave, entering the Rakov Škocjan valley. But no path goes through the cave along the water till there. The path however goes through the cave towards the left. We soon exit the cave and cross the river by a small, picturesque bridge. There is a big turn of the river and we continue left - along the river into another cave. That one brings us into a big sinkhole below the Small Bridge, which we see above us. We can explore that sinkhole till the source of Rak river. Another path goes also to the entrance into Zelške jame, which is closed by an iron fence. So, we must return by the same route on parking place.

The whole valley is since 1949 protected by the state of Slovenia as natural attraction and has a status of landscape parc. In the area endemitic animals and flowers were found. One of them is a species of small snails (Belgrandiella kusceri), the other one is a rare species of fern (Thelypteris palustris).

You can see many nice pictures of Rakov Škocjan (my pictures were made unfortunately only by phone). Simply Google by the phrase "Rakov Skocjan", or see also the 3D show below (Burger).