Rambling and scrambling in The Lake District

Rambling and scrambling in The Lake District 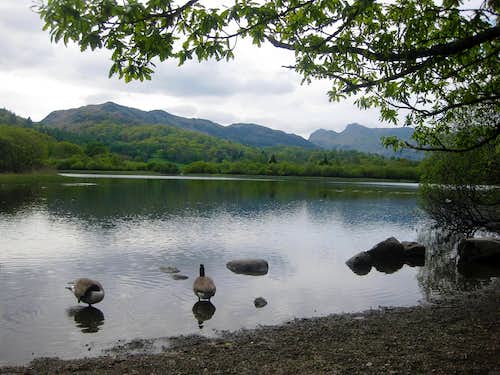 Elter Water, one of the many lakes
One of the more rugged areas in England is The Lake District. I wouldn't call it mountainous, but there are plenty of hills - and lakes of course. It's also the wettest part of England. Whether it's the rough nature of the countryside or the climate, I couldn't say, but it's not heavily populated. There are a couple of towns on the outskirts, and plenty of small villages in the valleys, but, higher up, the hills, or fells as they are called locally, are pretty much bare. Most are walk ups, but there are plenty of nice scrambling routes as well as some serious rock climbing possibilities.

Officially, camping wild is not allowed in England, but in some areas, such as The Lake District, unofficially it is accepted provided you stay well away from civilization, which means high up and away from cultivated land.


In the spring of 2012, I packed my camping gear to go wandering and have a look for myself. I expected to get wet, but I got really lucky: apart from a very light drizzle on first day, I didn't get rained on. Instead, it got better and better, and one day it even got so hot that a short but violent thunderstorm developed by the end of the day. But by then I was safely back in the valley.

A day later it was hot again, but no thunderstorm this time, which was a good thing because I was camping high up at the banks of Red Tarn, east of Helvellyn. During the night, the wind got stronger and stronger and eventually one of my tent poles snapped. I fixed it provisionally, but that didn't last long. Being out of spare parts, my tent was now reduced to a bivvy bag. It was a good thing that it was the last night I would be camping; tomorrow night I would stay in a hostel in Ambleside, so I could enjoy a shower before traveling home. I'm sure my fellow passengers on the plane would have appreciated that, if they had known...

Seathwaite Farm with Base Brown (646m) behind it

Thanks for sharing your English back country experience Rob!
Cheers Jason

You're welcome. It was a fine trip, with no small thanks to the very un-English weather. Cheers, Rob

..to find a Dutch Peak monster enjoying a corner of England.

It is extraordinary we missed each other by a mere 24 hours!
Next time you go here you should do Pinnacle Ridge on St Sunday before going to Helvellyn - and then descend via Striding Edge - to make a variation on the Patterdale Round.
I'm plannning on going back here 1st weekend in April to take my son & his partner round (weather permitting!).
Berg Heil Sir
Mark

The way this winter is holding on, you might need crampons and ice axe early April. We had a little snow today, and I live below sea level!