Ramshorn Peak is the northern most peak, (over 10K), in the Wyoming Range.  It lies between Monument Ridge to the east and Beaver Mountain to the west.  The closest 10,000 foot peak in the range is Clause Peak to the South.  The most prominent views of the peak are found at the lower end of the Hoback valley from the small guest ranch that was my boyhood home.  In the photo below, the summit is just in the clouds above the prominent cliff band. 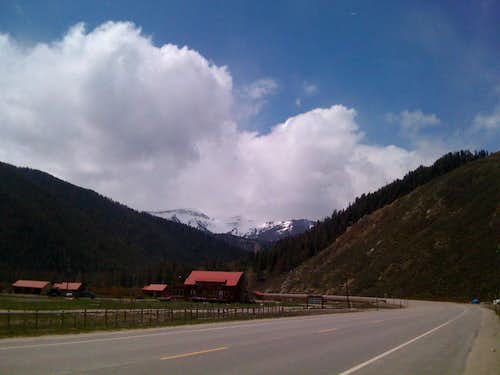 A view of Ramshorn in May, taken from the Black Powder Guest Ranch, (V-V Ranch when I lived there).

This peak does not see a lot of summit attempts, although in Thomas Turiano's Select Peaks of Greater Yellowstone he mentions that it has been skied numerous times.  The other primary activity on the mountain is big game hunting.  However, I doubt that many hunters actually make it to the summit.  We guided hunters in the area, and I had been as far up on the peak as the "pass" at the south end of the long ridge that runs to the summit, but personally had not climbed to the summit until July 27th, 2013.  Another indication of the lack of "peak baggers" on this mountain is no sign of a summit register. The views from the summit are tremendous, especially on a clear day.  You can see many of the peaks in the Wind Rivers, and you have a front row view of many of the Gros Ventre peaks, as well as the world famous Teton range. The lower trails have become popular spots for mountain biking, but in general, this mountain offers solitude and a true wilderness experience.  Depending on the time of year and day, one may have the opportunity to see elk, deer, moose, bear, coyotes, foxes and numerous small species.  There are also mountain lions and potential for wolves, but sightings are rare.  The wildflowers are exceptional during the summer months. 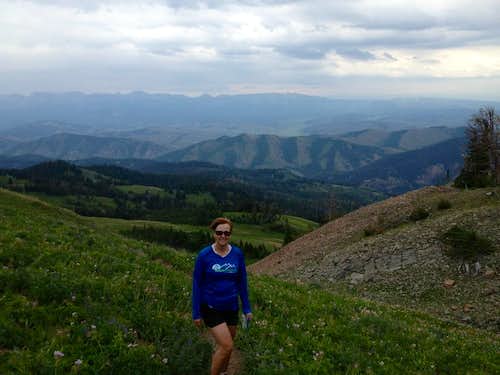 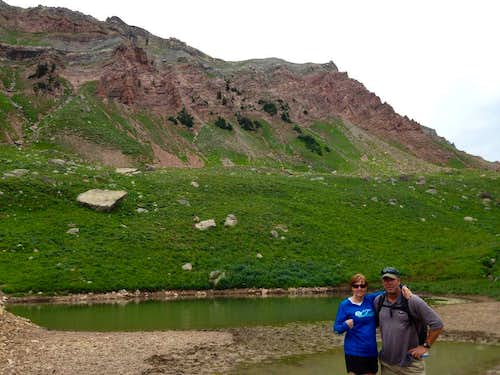 Just under the summit ridge on the Ramshorn

The standard route is via the Gibbs Creek Trail head, and Ramshorn pass.  This trail, which is a combination of old logging roads and hunting camp trails is well defined and takes you to the pass at the south end of the summit ridge at an elevation of 10,000 feet.  The summit is 1.5 miles north along the summit ridge and it is at 10,368.  The last mile and a half is a scramble, mainly class 2, with a couple of short class 3 sections, (the class 3 stuff can be avoided by dropping below the cliffs and rock outcrops on the west side).  There are a couple of important notes regarding the route information: 1) All of the topos that I found in print and online are out-of-date/inaccurate, and don't show the proper trail position. 2) Currently, (as of summer 2013), there is a CRITICAL unmarked point where the trail exits the old logging roads and climbs a ridge to gain access to a high bench.  This exit point is hidden, because the "main trail" drops below a washout and then continues around and into another drainage to the south.  At the washout, you need to stay to the right, leave the logging road and begin the climb up the ridge. Options - The cliff bands that guard the summit make for some interesting routes that would offer strong class 3/4 climbing.  The difficulty generally increases from south to north along the east face.  We descended through some of the smaller cliff bands on the southern section of the ridge.  The image below shows the route that we did on this climb, which includes the bushwhacking and the scramble on the descent through some of the moderate cliff bands. 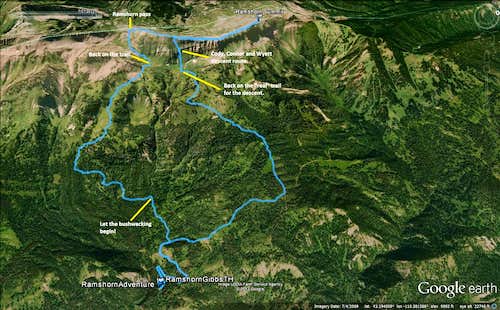 Google Earth view of the route that we climbed, (not the standard route).

This video shows the terrain and views along the route depicted above. https://www.youtube.com/watch?v=3ReB5VbbyMU&feature=c4-overview&list=UU7vCEdDkkhrJiEyWFrF0mhA The following image shows the actual route, (the red line is the approximate location of the trail which we did not travel on, due to the bushwhacking ascent and the fun/challenging descent option). 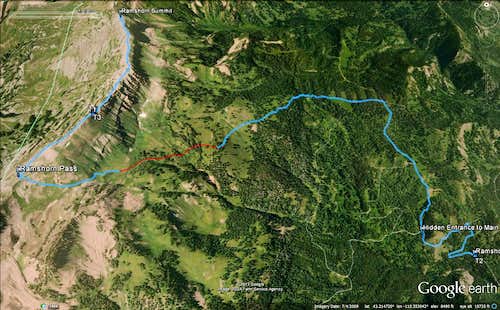 There isn't any red tape.  No fees, No permits, not even a summit register.  Just enjoy yourselves and be safe.

This is bear country - mainly Black bear, but Grizzlies are possible.  Also, as I mentioned earlier, there are hunting activities in the fall.

The primary climbing season depends on what you are looking for.  If you want to avoid the snow, then the best time for hiking the trail would be Jul-Sep.  Snow climbs would be safest in the spring/early summer when the snow pack has settled.  The entire eastern face of the upper mountain is avalanche prone and should be treated with the appropriate precautions during the winter months.

The Cliff Creek drainage, which provides the best access to the peak has numerous unofficial camping areas along the road and near running water.  These are primitive sites, without restrooms and drinking water.