Ranger Peak is a hidden hubbub of activity. Located in the southern part of the Franklin Mountains Range, just north of downtown El Paso, Texas. It features the only public accessible aerial tram in Texas, a B-36 crash site, 2 massive telecommunications towers, a visitor center, and a hiking trail. All just minutes from downtown El Paso. 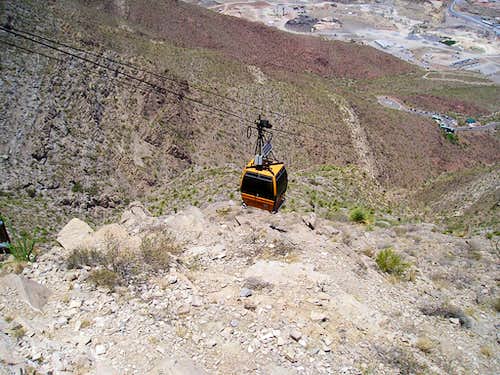 There are a few different ways to get to the top of Ranger Peak.

1. From the intersection of Alabama St. and Mckinley Ave follow the signs west on McKinley as you drive up the steep paved road that snakes up to the tramway base. From the parking lot you can purchase a ticket and take a 4 minute ride up to the top.

3. From the west side of the Franklin Mountains take N Stanton St. until it dead-ends. At the end of Stanton St there is a white water tower, behind the tower is the trailhead for the 1,000 Steps Trail. Follow the trail up the side of the mountain until it intersects with the Ridge Trail. To the right leads to Ranger Peak, to the left leads to the B-36 crash site.

Ranger Peak is part of the Franklin Mountains State Park and is owned and operated by the Texas Parks and Wildlife Department. 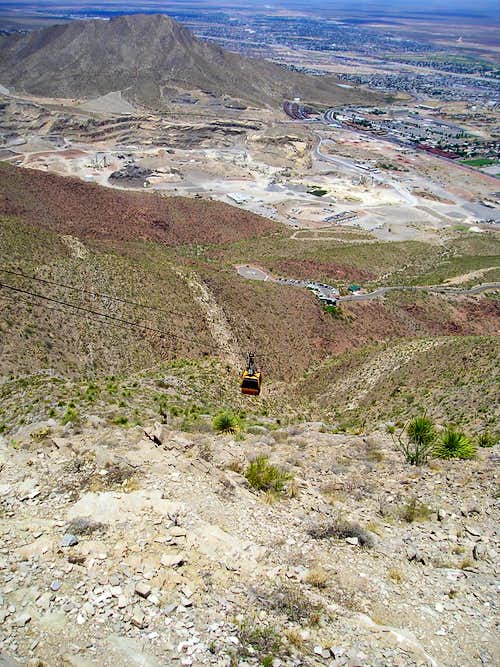 The Tramway was originally named the El Paso Aerial Tramway and was built in 1959 by Karl O. Wyler for NBC affiliate KTSM Radio to aid in the construction of a transmitter antenna and service platform. The tram was used to haul construction equipment, workers, and sections of the antenna to the summit. It was privately owned but allowed public access from 1960 until 1986. In 1986 the tram was closed to the public due to high insurance costs although it continued to provide access for maintenance of telecommunications equipment. In 1997 the tramway was donated to the Texas Parks and Wildlife Department as part of Karl O. Wyler's final will. The tram was extensively renovated and again opened to the public in 2001 after being closed to the public for 15 years. It is now named the Wyler Aerial Tramway in honor of Karl O. Wyler.

The swiss made gondola is the only publicly accessible aerial tramway in the state of Texas. From the parking lot at 4,692' above sea level, the 4-minute ride to the top travels 2,400 feet (about 8 football fields) and arrives on the top of Ranger Peak at an elevation of 5,632'.

The tickets for the tram are currently $7.00 for adults and $4.00 for children 12 years old or younger. You must buy a ticket even if you have a Texas State Park Pass. Ticket sales end one hour before closing.

Joint Advisory Committee for the Improvement of Air Quality

Joint Advisory Committee for the Improvement of Air Quality has 6 webcams on Ranger Peak that are updated every 15 minutes and can be viewed 24 hours a day here.

The Convair B-36 Peacemaker was a long-range strategic bomber and was the largest American warplane ever in production. It was designed during World War II when it looked like England would fall to the Nazi's and the United States would need to be able to bomb Germany from bases in the United States. The B-36 was 230' wide, 162' long, and had a 49' tall tail. Empty it weighed 131,740 lbs and could take of with a gross weight of 276,506 lbs (over 138 tons). Loaded with a 40,000 pound A-bomb the B-36 had a combat range of 3,500 miles and could stay aloft as long as 40 hours. Of the 385 B-36's produced only 6 survive today. The B-36 was replaced by the B-52 Stratofortress. 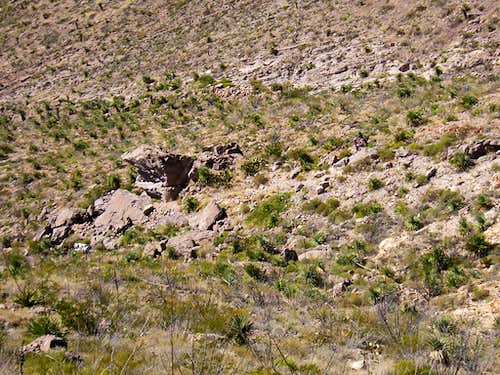 On December 11, 1953 a B-36, SN 44-92071, was being transferred from Carswell Air Force Base in Fort Worth, Texas to Biggs Air Force Base in El Paso, Texas. The plane crashed into the west side of the Franklin Mountains at around 3 pm while attempting to land in bad weather. The plane carried a crew of 9 and there were no survivors. Now, 55 years later, all that remains of the once glorious plane is three propellers, a jet engine, one of the landing gear assemblies, and bits and pieces of cables, wires, and aluminum.

The crew members who perished in the crash were: 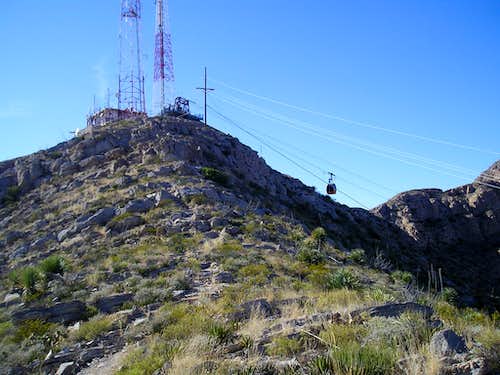 The Ridge Trail is a 2 mile round trip trail which starts at the summit of Ranger Peak. Before hiking visitors are required to check-in at the visitors center on the peak, there a map is also available.

The trail is mild and takes between 1 and 2.5 hours depending on one's physical condition. The trail starts at the southeast and loops around clockwise to the northwest of the peak, making a have circle.

From the trailhead proceed to the south east as the trail drops down to a little chalet.

From the Chalet follow the trail southwest until reaching a separate trail that leads south to the towers on Comanche Peak. This trail lies on private property and there is a sign stating "Restricted Area Do Not Proceed beyond this point". Here you are directly south of Ranger Peak.

From where this trail branches off stay on the Ridge Trail and follow it northwest. Another trail will branch off to the left, this is the 1,000 Steps Trail and will lead down to Stanton St on the west side of El Paso.

Continue following the Ridge Trail northwest until the B-36 overlook. There is no trail down to the actual crash site. From the overlook, look down to the north and you will be able to see several remaining parts of the plane including part of the landing gear and a turbine engine. 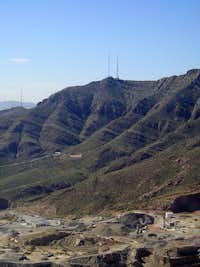