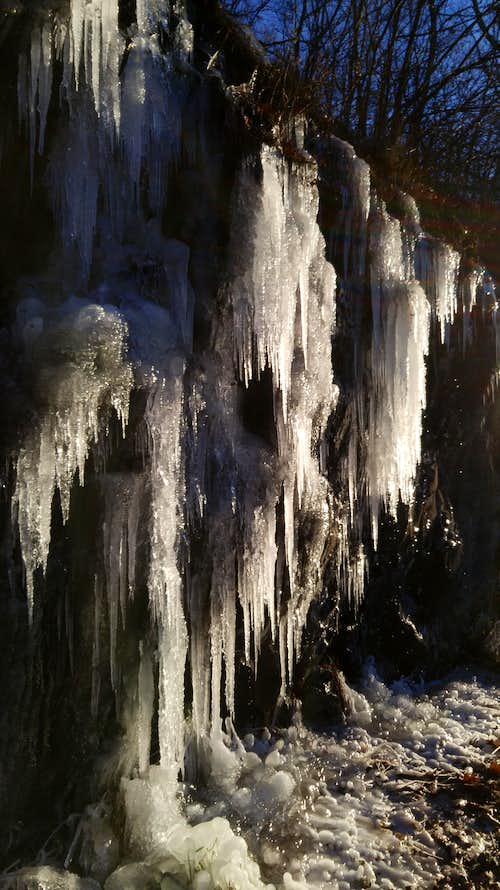 Blue Ridge Parkway Icicles
Known mainly for the vistas and the fall colors and not the rock climbing, the Blue Ridge Parkway in Virginia nevertheless has a handful of spots good for rock climbing and bouldering. Probably the best and best-known of them is Raven's Roost, about 11 miles south of the Parkway's northern terminus. A signed overlook is the parking area, the cliffs are beneath the overlook, and a use trail gets one down to the base in short order. It doesn't get much easier than that.
At the crag are at least 14 established trad and toprope routes. Mostly they are easy and moderate grades from 5.4 to 5.8, but there are some up to 5.12c.
It's good climbing and longish (for Virginia) single-pitch routes that get up to about 100'. Do be cautious about loose rock, though. While solo-toproping a route here, I dislodged a large, sharp rock that proceeded to fall on my rope at the base, making an incision that caused me to have to cut 16' off a brand-new 60m rope. Had that happened instead when I was solo-leading the same route a few days later, I essentially would have been free soloing the route.
Because the cliffs face northwest, climbing can be good during the early afternoon hours in winter. Even on a day in the 30s, I found the climbing pleasant while on a sun-splashed route. In the summer, temperatures up here, about 3200' above sea level, can be up to 10 degrees cooler than in the valleys below, making a possible respite from the typically sticky Virginia summer. Just don't climb in the afternoon, though, as the place may become like an oven.

There all kinds of ways to access the Blue Ridge Parkway.
Raven's Roost Overlook is on the west side of the road between Mileposts 10 and 11, closer to 11. Nearby are the popular Humpback Rocks, a rocky pinnacle that has a hiking trail to its top.

Photo linked from Mountain Project. This tree is close to the parking lot and can be used as one toprope anchor point for several climbs.

Having only been here twice, I am not entirely certain about the locations of all the routes, but below is a presentation of them from left to right as one faces the crag from the base. Using other sources, I have put this sequence together, though the first three might be out of order.
For some routes, there is considerable discrepancy on the grades between Mountain Project and rockclimbing.com. In those cases, the former's grade is noted first and the latter's is second.
For toproping, bring gear and/or long webbing/cord.
Mountain Project page for Raven's Roost
Rockclimbing.com page for Raven's Roost

None close by along the Parkway.