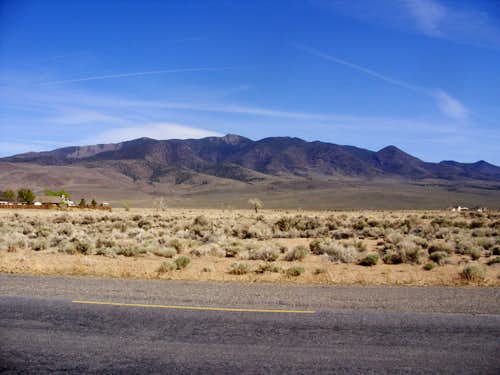 Rawe Peak massif from Dayton
Introduction
At 8328 feet, Rawe Peak towers nearly 4,000 feet over the town of Dayton; a town located 10 miles east of Carson City, Nevada. Unlike the higher Pine Nut Mountains and Como Peaks to the south, which are remote, and require long drives on rough roads, Rawe Peak is easily accessible from Reno and Carson City, Nevada. Despite this accessibility, Rawe Peak is rarely climbed. One reason is that people prefer to hike the Sierra Nevada mountains and the Lake Tahoe area nearby. Another is that Rawe Peak does not have an established trail network and has thorny mahogany trees on its higher slopes.

When we climbed, we found a small glass container (the summit register) with a bunch of pieces of paper. The last entry in the summit register was from 2007, and less than 10 people it seemed had submitted entries this decade! Of course, not everyone who climbs has a piece of paper to put in the summit register. My guess, from what what we could tell, is that only a few people a year climb to the actual summit. Instead, most people who travel here, do so to use off-road vehicles to ride the roads on the mountain's lower slopes.

When to climb
Because Rawe Peak is located in a desert climate, it receives far less precipitation than the Sierra Nevada Range to the West. Snow usually melts quickly. However, because the snow mostly sits on the ridge, it can be an advantage to climb during winter months. Rawe is an excellent destination during months when the snow pack is too thick in the Sierras. The road to Hazlett Spring (5218 feet) is mostly snow free all year round and Barton Spring (5900 feet) can be reached most of the year, except after snow storms hit the valley. During summer months, the heat and potential to run into rattlesnakes makes Rawe a less attractive excursion and is not recommended. Conversely, during winter months, high winds represent a potential danger which can turn 50 degrees day in the valley to well below freezing on the open ridge. Be mindful of this when selecting a day to hike, if doing so during those months.

No matter when you hike, bring lots of water. This is the desert. Also, make sure to wear long pants, and a long sleeve shirt to protect from thorny bushes and the thick mahogany trees.

For the primary route from Dayton here are the directions: From Carson City, get on Highway 50. From the 395/US 50 intersect, take US 50 for 9.5 miles east to Dayton Valley Road in Dayton, NV. Get off Highway 50 at Main Street (Dayton Valley Road) on the western side of Dayton. Follow Dayton Valley Road (35 MPH) east for 4.4 miles(4459 feet at this point). Dayton Valley Road ends, and another road heads north. Instead, continue straight to the end of the pavement. After a couple hundred yards, there is a gate at the entrance to public lands. At the gate, open on the right side, drive through and close.

Now you are on the dirt road heading up the east side of Rawe Peak.
Take this road south-southeast towards Hazlett Spring for 2 miles (5218 feet at this point). Continue for about 1.5 miles to where you will see a fence surrounding a water tank. Just below this is Barton Spring. Before you get to Barton Spring, there is a road heading west that splits from the main road. This is the primary route and a good place to park. It is about 5872 feet at this point.

Road ratings
Although the road is smooth at points, part of the road is rough, with some parts very rough. A high clearance, 4WD is highly recommended. In terms of ratings, the road ranges between a 1 rating and a 5 rating (See Scott Surgent's page regarding the road rating system). In general, the road starts as a 3 rating, then hits a 5 rating up a hill, and then becomes a 1 rating to Hazlett Spring. To the preferred start of the route, it mostly ranges between 1 and 4, primarily the latter.

Rawe Peak can also be reached via Como Saddle. This also required 4WD, but puts you in the heart of the range. This will significantly shorten the route and roads take you up to within a few hundred feet from the summit of Rawe Peak.

Como Saddle is reached by taking Old Como Road off Dayton Valley Road about ¼ mile from US 50, and following it for about 3 miles south past the Eldorado Canyon Reservoir, where a slight left takes you about 7 ½ miles to the ghost town of Como, Nevada. This road is referred to as the Como Ghost Town Trail.

More details are found on the Lyon Peak page, which can also be hiked from Como Saddle.

For the primary route from Dayton, described above take the road heading west for about 1/4 mile. A side road heads south towards a rock formation and a rocky top hill. At the end of the road, head up the relatively open slope in between the two rock formations which climbs about 400 feet in 1/4 mile. 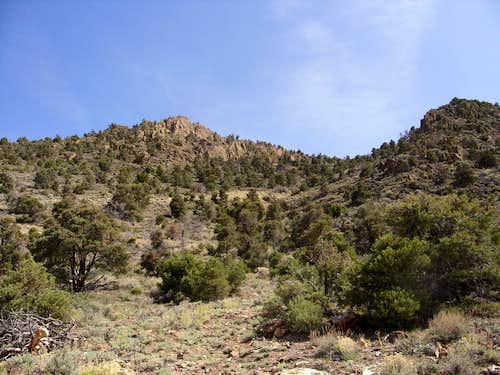 The first part of the climb - head between the two rock formations.

At the top, the slope continues pretty open. Hike towards the summit ridge, which continues up a moderate slope. At the base of the summit ridge one can see there are some thick mahogany trees, but there is some room between them to get up the ridge. Walk towards the ridge and head up, choosing the most open route. At the ridge top you are at 7300 feet. You will head west until the ridge is devoid of trees. Follow this up to a large rock formation. Head left around the rock formation where you will find a slight use trail with cairns.

Take this all the way up to a field. When you get out onto the field, the elevation is about 7830'. At the field you will see the summit of Rawe Peak in the near distance. You still have a way to go. Head towards the left side of the field. Look for cairns. The mountain is covered with thick mahogany trees. There is only one clear way up and it starts at the left side of the field. Once you find the cairns, head up to the ridge top. 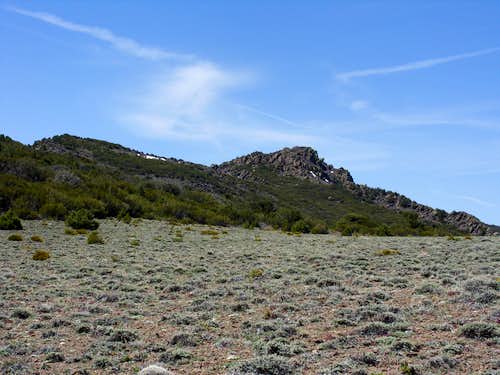 The summit is tantalizingly close from the field. Alas, it is still over 40 minutes away. 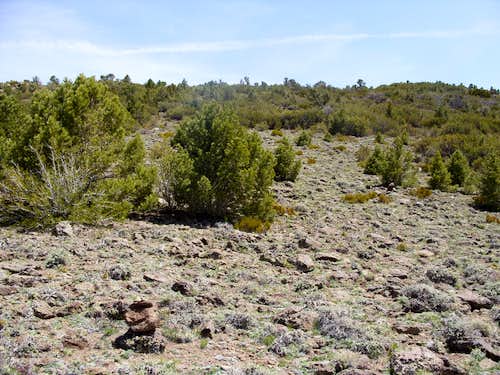 To get to the summit, look for cairns on the left side of the field and head up the open area, following cairns.

Once atop the ridge, and on open slope, continue on for another 20 minutes or so to the summit. Although round trip this hike is only about 7.5-8 miles from the noted parking area (depending on whatever specific path you take), the hike can take over 6 hours round trip. The trail is not maintained and hard to follow. You can't avoid the thick mahogany trees unless you follow the cairns and the faint use trail perfectly.

At the summit, the views are tremendous. You can see the Sierra Nevada Range to the west, and the Pine Nut Mountains directly south. Views to the east are up to 100 miles. 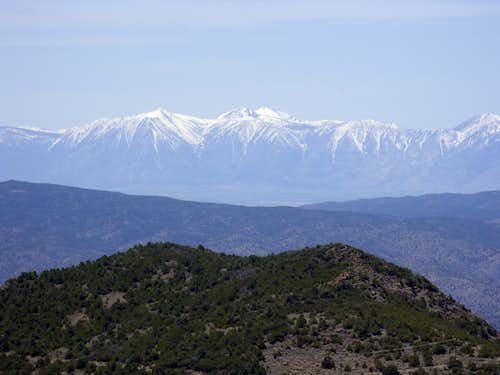 Mount Freel 10,881 feet from the summit of Rawe Peak

Other options for this route
*If you wish to shorten the main route described above, you can drive to the base of the climb between the rock formations and cut off almost 1/2 mile. Thus the hike would just under 7 miles round trip, while the elevation gain would still be about 2350' and you would save only 25 minutes max. If you want a long trip, you can start at Hazlett Spring, and walk straight up the hillside, instead of taking the road. In this case the hike would be about 10 miles round trip with an elevation gain of 3,200 feet.

If you want the shortest route possible, there is a 4 mile round trip route. In this case, you drive up the road, heading east below Barton Spring, and continue until the road ends. This will put you at over 7,000 feet. From here, bushwhack up to the mahogany covered ridge top. There are some open spots through the woods, but you need to be good at route-finding. Make sure to head west and continue to gain elevation. Eventually you will come out on the bare ridge, and follow the same route as described above from 7300 feet on.

You can get far closer than 4mi round trip by driving to the Como Ghost Town and then continuing along the Radio Tower access road leading north from Como. (And if you pick your route carefully you can reach the summit saddle with minimal mahogany)