This hardly qualifies me as unique among mountaineers, but I hate being beaten by a mountain and am haunted by the need to take care of unfinished business.

In 2007, a friend and I failed to climb Sublette Peak in Wyoming's Absaroka Range. The day before, we had studied what looked like a good route to the summit. The day of the climb, though, we encountered two surprises: conditions on the mountain were much worse than we had expected them to be, and fog was wrapping the mountain, which meant that every time things got bad, we couldn't see far enough above us to make a good decision about how to proceed. So each time, we backed off. And eventually, we retreated from the climb.

Let's face it-- we quit, as well we should have, but I hate quitting, and I hate the word, and the day has bothered me ever since. I doubt a day has gone by that I haven't thought about it.

Sublette Peak is not some massive, super-high peak that trophy-seekers are out to claim. It has a short approach and a shorter climb-- about 400 vertical feet from where the real climbing begins. But it is a nasty 400 vertical feet, with all of the following, sometimes at once: extreme exposure, rock that is beyond loose (it often breaks, crumbles, or pulls away under the slightest pressure), steep ledge traverses covered with hard-packed dirt that offers just about no purchase, and climbing in the low Class 5 range on rock that no sane person would trust to hold pro in a fall.

Basically, the mountain is like an undersized grizzly-- not impressive measured against others of its kind, but still easily able to dispatch some mere human. That "little" grizzly can make a statistic of you with no trouble at all; so can Sublette Peak. 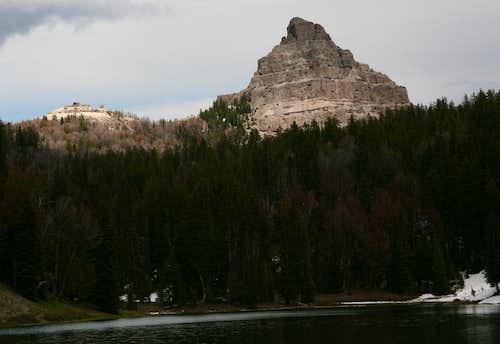 I'd spent the night at the Bonneville Pass Trailhead, getting into the true spirit of the Western wilderness by sleeping in my car, drinking ice-cold beers pulled fresh from a cooler, and watching 3:10 to Yuma (new version) on my portable DVD player. In the morning, I started the engine and let the heater get going before I emerged from my sleeping bag and dressed. Roughing it is great.

Alone, I hiked almost to Bonneville Pass and then left the trail to follow a ridgeline to the summit of the northeastern Pinnacle Butte. That was one of the most amazing mountains I have ever been on, and it reaffirmed my undying, unchallenged love for the Absaroka Range much the same way giving my wife a diamond-encircled band for our tenth anniversary reaffirmed her undying, unchallenged love for me (the thrill on the mountain lasted longer, though, but maybe that is my fault-- oops). Anyway, that (the mountain, that is) could make for another trip report.

I started at 6 and got back to the car around 10. I had at least 5 hours to kill before I could check in at Togwotee Mountain Lodge, where I had a reservation to spend the night.

The day before, after climbing the northwestern Pinnacle Butte with musicman82, I mentioned, as he was getting ready to head home, that I might give Sublette Peak another shot the next day. He said, and this might not be exact but is pretty close, "Bob, this time, I think you'll get up there." 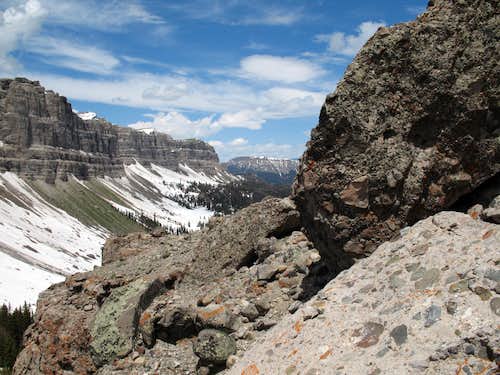 What you climb on here...
First, there was the might; the looks from NW Pinnacle Butte suggested that NE Pinnacle Butte would be a task and that I should prepare myself for a long outing and for failure, but I'm glad to say I made the top and that it was easier than I thought it would be, almost disappointingly so. It's like trying to seduce a beautiful woman (not that I would know anything about that outside knowing my wife-- that's in case she reads this); you want her to accept your advances, of course, but not too quickly or early, lest it say more about her than about you, and let's face it-- we men need to believe it's all about our looks and charm.

Don't you ladies forget that!

Second, I think he imagined I would try a walk-up way we'd semi-scouted. The route existed, I knew, because andinistaloco, who had climbed the mountain and agreed with me about the conditions but was good, crazy, or lucky enough (or all three) to make the top, had mentioned it to me in January 2008.

Well, musicman82 was wrong, in a way, and that's only if I understood him correctly, which is a little up in the air when you're tired and you have cold beer and 3:10 to Yuma waiting.

I had no intention of climbing via the walk-up route. There were some good-sounding reasons-- the road that accessed the route was blocked by snow (true), the route was a little uncertain (less true), I might be too tired for that longer route after my morning climb (true in theory but not in reality).

No, the real reason came from pride. If all else failed, I was willing to come back another year and do it the walk-up way, but there was a part of me that needed to do it the hard way, especially since some dude from a rival high school had done it that way. There was no way a South Lakes Seahawk was going to get away with doing something an Oakton Cougar couldn't. So I did it to be true to my school.

I did it because I'm a stubborn bastard who has the brains to retreat but can't square it away with his heart.

I did it because it was there. There's a cliche for you, but it's still true.

I did it for the money and the girls. Okay, that's a lie, but I wish it weren't.

And I looked at the peak in all its entirety, all its glory. I looked upon its works...

...and I despaired--
(For you lit-retarded folks, that was an allusion to Shelley's "Ozymandias," one of the greatest poems ever.) 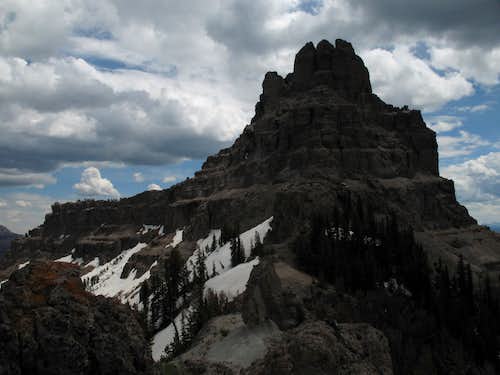 And then, dammit, I climbed it. After slips and stumbles and steps to the edge, after closing one door and opening another, I got up.

I felt like a million bucks. Yeah, that's a cliche, too, but that's how I felt. I even whooped when I exited what turned out to be the crux and realized I was actually going to reach the summit.

And so I did. And what greeted me were sprinkles of rain and an approaching thunderstorm. At least this time I'd unstrapped my ice axe and left it below before going to stand on those summit rocks.

Then I had to retreat. 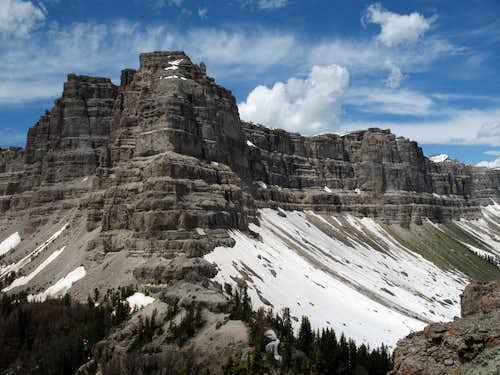 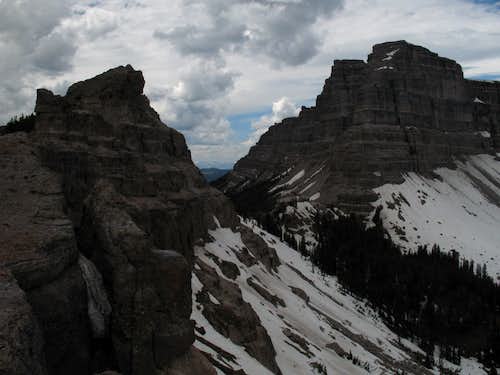 Nice description of the mountain. Unless my climbing skills improve dramatically I don't have to worry about trying this route!

Congrats. I do understand the redemption thing...I have a little unfinished business myself.

Well, Mark, there is a Class 2 route on the other side. Of course, if your CO trip takes you to the Elks or San Juans, you won't have to look too hard for similar stuff, so you might be dealing with that exposure and bad rock after all!