In the mid-eighties, thanks to funding from the Valle d'Aosta region and the granting of free land by the municipality of Ayas, the company of alpin guides embarks on a new ambitious project, the construction of an alpine hut in Ayas Valley.
This shelter, which will be inaugurated in September 1991, is located at (3.420m) on the rocky ridge called "Lambronecca" and is located about an hour's walk from refuge "Ottorino Mezzalama". Itis a modern and functional structure with a capacity of 80 beds, which further qualifies the local tourism and offers a better use of the area also to foreign climbers often accompanied by guides who come from nearby or from Breuil-Cervinia Zermatt to climb the peaks of Monte Rosa massif.
Situated on a large rock which rises from the glacier "Grand Verra", the refuge is perhaps one of the most interesting and challenging of the Valle d'Ayas. The structure, made of metal, masonry and wood, is imposing in size. The interior is very well maintained.
Situated on the outflow of glacier, it is in the middle of the ice, in fact from this shelter roped parties start to peaks such as Castor, Pollux, Breithorn and Roccia Nera with his passage to Switzerland. The southern spurs of these summits are especially remarkable, as is the view of the valley, which on a clear evening to offer the faraway Monviso. 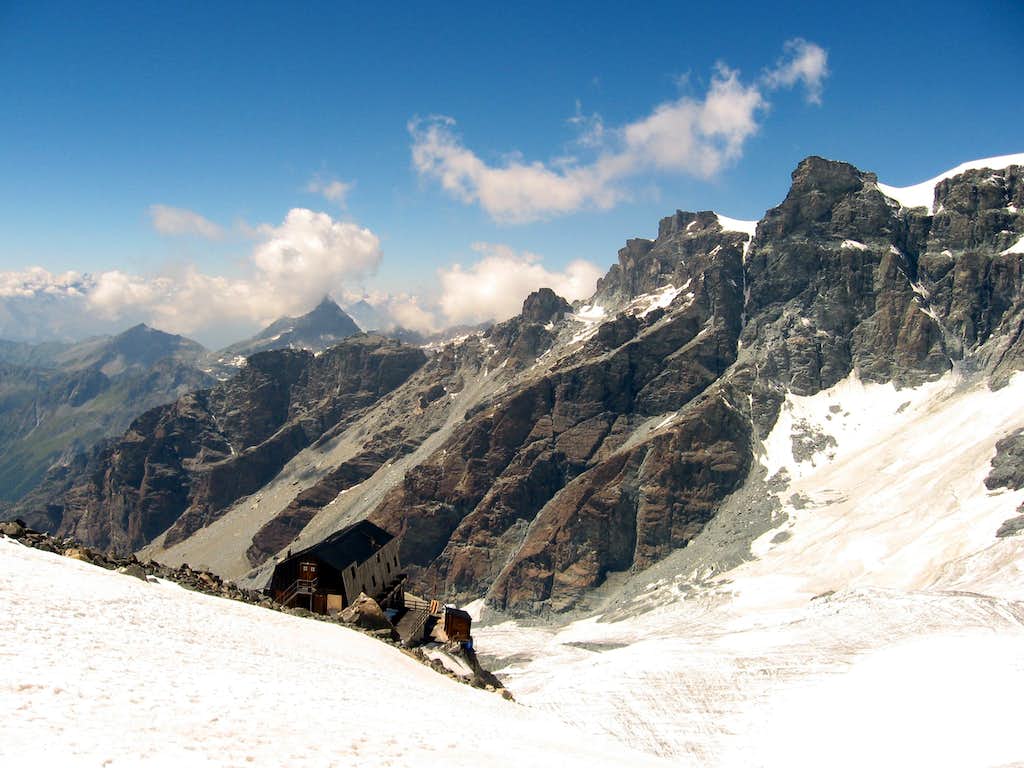 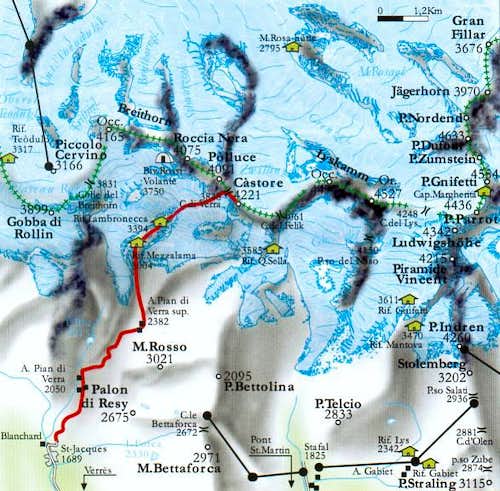 The route to the refuge
From the hamlet "St. Jacques" (Champoluc 1.689m), leave the car in the square of the Church and continue on foot for a few minutes until the village Blanchard. Here the signs pointing us in the direction of the path 7. The trail continues in the woods, spend a clearing with the construction and re-enter the woods until our path joins a mule track. The latter, quite flat, soon joins the dirt road (private traffic is prohibited) from Saint-Jacques. Now there is a green plain called Pian di Verra Inferiore, after which the signs indicate the Blue Lake and right refuge Ottorino Mezzalama and the Refuge of the Guides of the Val d'Ayas.
Once the switchbacks the trail continues into the dirt road that runs alongside the stream, goes flat in the valley that leads to the Pian di Verra Superiore (2.350m). Shortly before, indicated by two signs, the trail branches off to the left and climb the steep slope that forms the edge of the moraine of the glacier. Then walk along the crest of the bank and you are already ahead of the Mezzalama Refuge, higher up and away we also see the Refuge of the Guides of the Val d'Ayas.
The land of mixed grassy and stony now becomes stony and gravelly, a typical feature of the moraines. Still continue and arrive at Ottorino Mezzalama Refuge (3.004m). Continue the walk from the landing spot for helicopters on the left of refuge, and go back again the bank of the moraine. Continue to see the Refuge of the Guides of the Val d'Ayas own on the spur of the rocks Lambronecca and your trajectory of ascent is on his right side.
Then walk along a section of trail not so obvious because of the type of terrain, but still well marked (in yellow) that allows us to reach the Verra Glacier. Cross its lower section to the right and go up the steep stone path with the path, equipped in the last meters, which allows us to get to the Rifugio Guide to Val d'Ayas. (5h'00 hours EE).
It's also possible came from the Refuge Guide del Cervino on the Plateau Rosà (3.400m). Passing the Breithorn pass and crossing the glacier di Verra. (2h'00/3h'00 F). 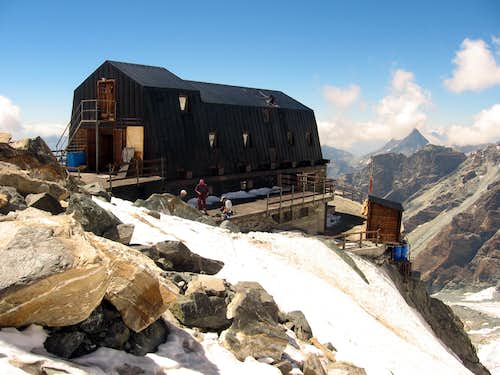