This often overlooked route boasts steeper and more sustained climbing than either the Leuthold's or Sandy Glacier Couloirs. The route weaves its way through steep, rime covered towers creating an Andean ambiance. Like many routes on Mount Hood, the Reid Glacier Headwall is exposed to ice and rock fall. Insist on cold conditions and start early. The best times for an attempt are December through mid May. 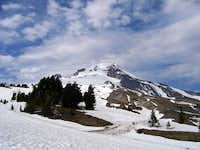 The Reid Glacier Headwall route starts from Timberline Lodge and follows much of the South Side Hogsback route. From I-5 drive east on US Highway 26. Turn left shortly after Government Camp following signs for Timberline Lodge. 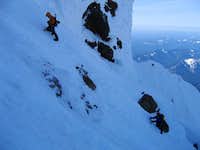 From Timberline Lodge @ 5800 ft acend the Palmer snow field avoiding grooming machines. Reach the top of the ski lifts @ 8,600 ft. From here aim for Ilumination Saddle, the prominent col between Ilumination Rock and the main summit.

Rope up at the col (convenient bivis here) and drop down onto the Reid Glacier aiming for the first significant gulley system. Cross the bergschrund and weave your way up snow and ice slopes to 60 degrees. There is some route latitude here, follow your nose and use your route finding skills. From the top of the headwall traverse the summit ridge east to the highest point. Descend via the South Side route.

Amazing photos of an early December ascent on CascadeClimbers.com

I was looking for this

Why is this page not attached to Mount Hood? I couldn't find it for that reason.

I do not know how to attach. I will work on it, is there an article somewhere about it, that is how to do it? EB