Reiley Peak is the highest point in the Winchester Mountains, in southeastern Arizona about 20 miles northwest of Willcox. The Winchesters are managed by the Coronado National Forest, but most of the range is surrounded by private lands, and access into the heart of the Winchesters is limited to a handful of long-distance forest roads of variable quality. As a result, few people venture into the Winchesters, and fewer still seek out its summit at Reiley Peak. There are no established trails, and the Winchesters have a well-earned reputation for heavy brush. Nevertheless, a well-chosen route to the summit can avoid the worst of the brush, although it is still a fairly grueling hike.

Reiley Peak is one of the 73 mountains in Arizona with 2,000 feet of prominence. It is also one of the "Coronado 12", the highpoints of the 12 distinct sectors of the Coronado National Forest. The Southern Arizona Hiking Club usually plans a yearly hike to this lonely summit.

Panorama view of Reiley Peak. Brush Canyon is directly in front. Drop in, then climb up to the tanks seen on "Bovine Ridge" near the lone juniper. Then just follow this long ridge up to the top.

From Willcox on I-10, drive north then west on the paved Fort Grant Road. The road makes a series of 90-degree turns. After about 21 miles, it turns to dirt, and you will reach the intersection of Forest Road 651. Turn left, and start driving west on Forest Road 651, also known as the Ash Creek Road. After about 14 miles, you will come to a curve in the road. This is the intersection of Ash Creek Road and Sunset Loop. Turn left here onto a primitive dirt road, entering the Coronado National Forest. Drive west about a mile or so, where you will see a road off to the left. This is Forest Road 659.

The road from here on in is very rough, and has been re-aligned from what is shown on the topo maps to bypass some private property. It is difficult to explain the route explicitly, except that at any junction, proceed south whenever possible. Early on you have to pass through a very rocky creek drainage. High-clearance 4wd is required, and probably someone to spot you through this part so that you don't ding your undercarriage.

Eventually you leave the mixed forest and venture onto more open rangeland and some high country called "The Mesas". You eventually pass through a cattle grate at the "Broken Dipper" Ranch, and proceed south until you come to the lip of Brush Canyon, with the double-humped summit of Reiley in the distance.

Be especially aware of junctions, since these ranch roads all look alike. If you can, go with someone who's been there before. I tagged along with the SAHC (see link above). 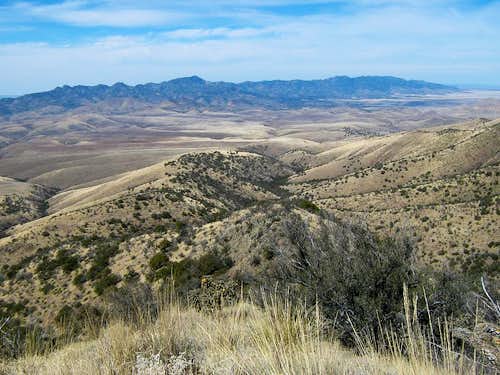 Looking down "Bovine Ridge", the route we came up is evident. Farther out is "The Mesas", then in back, the Galiuro Mountains 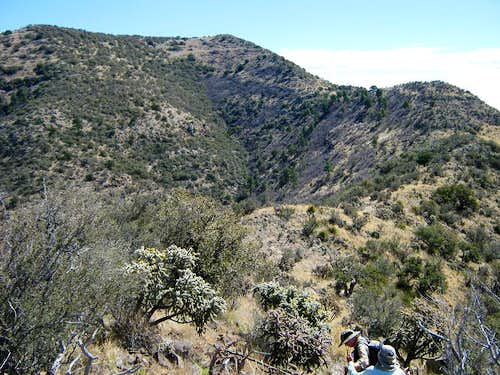 Getting closer, the route gets a little brushier.

You could conceivably camp at the road's end near Brush Canyon. It's open grassy ranch country, not very private. You can also camp in the forest farther out. It's all open camping out here. Practice "Leave No Trace" ethics.