South Korea is a place where hiking and mountaineering have deep roots in the culture.  On any given weekend, you can find thousands of Koreans out hiking their mountains in just about any weather.  In perfect weather, so many people will be out that there may be lines forming along many of the popular trails. 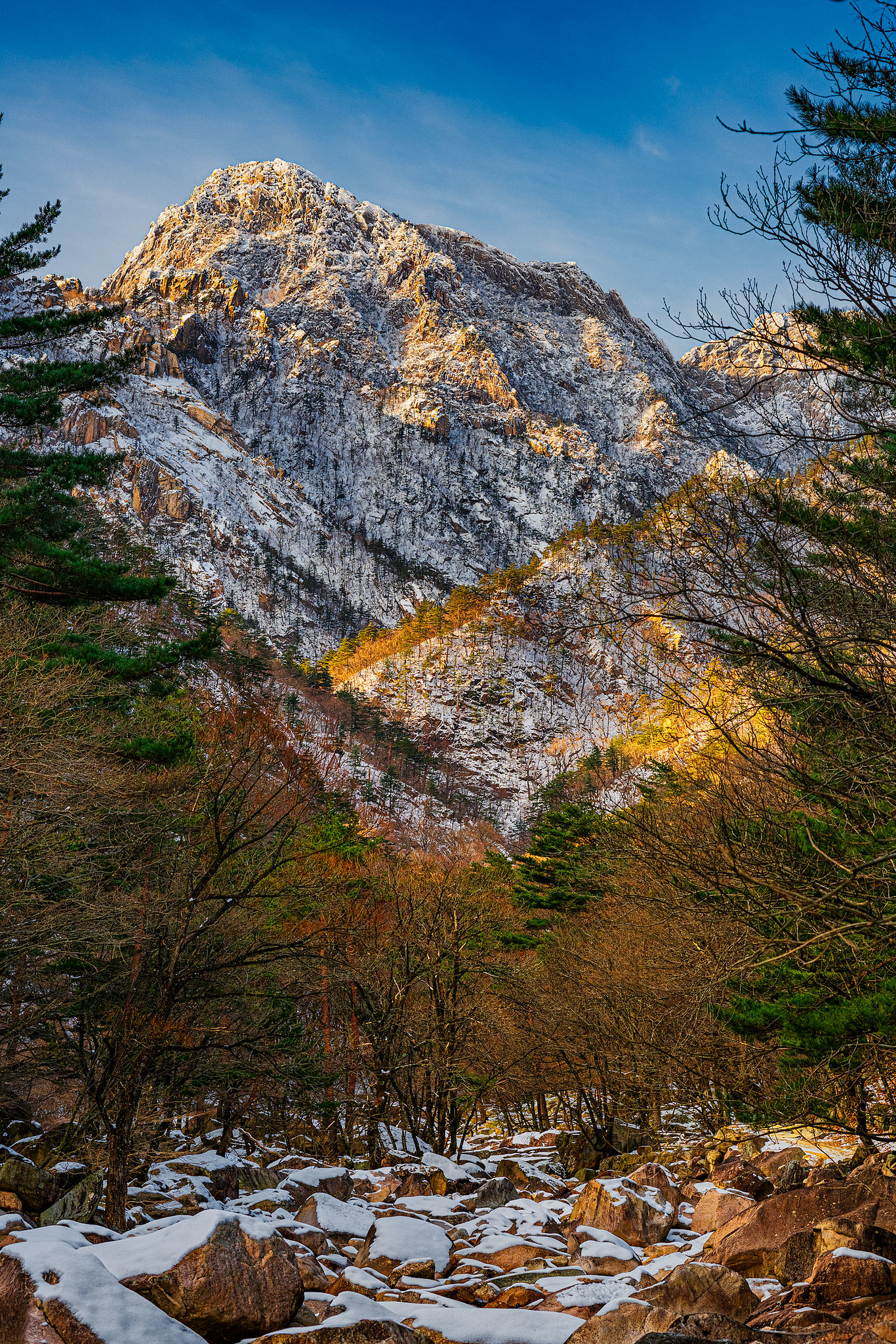 South Korea, going on 52 million people, is a touch smaller than the US State of Kentucky (not yet 4.5 million.....).  As you can imagine, the sense of wilderness isn't quite the same, and mountaineering is more of a social activity than one of solitude with nature.  However, the desire to "peak bag" is no less intense.  Even the prominent South Korean outdoor company Black Yak has a "100 summits" program whereby one endeavors to take their picture with a Black Yak flag on the tops of 100 summits and post it on social media.  I think you get some kind of certificate or something. 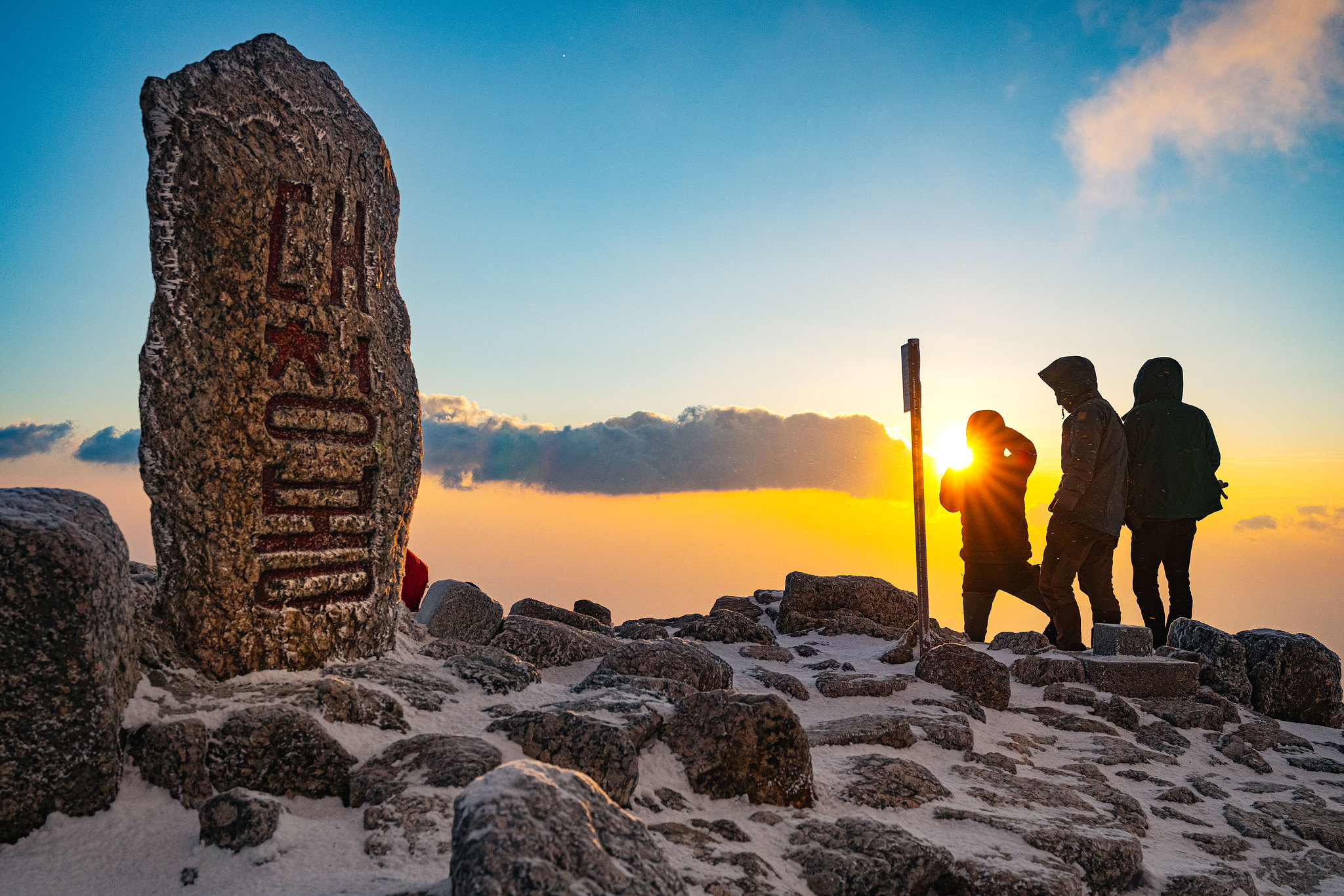 The urge to portray oneself with a 'mountaineering' image is quite strong as well; you'll see people outfitted for a summit bid on Denali casually strolling along a paved (or even CARPETED) trail with trekking poles on a cool fall day no more than 15 minutes from streets full of restaurants and cafes.  On the summits, you'll find people having elaborate picnics replete with soju and makgeolli! (The national parks have actually been working on banning alcohol on the trails, likely to reduce accidents.)  Even the highest and most rugged of Korea's peaks feature marvels of mountain engineering; stairs, hardrails, ropes and chisled steps in the rock. 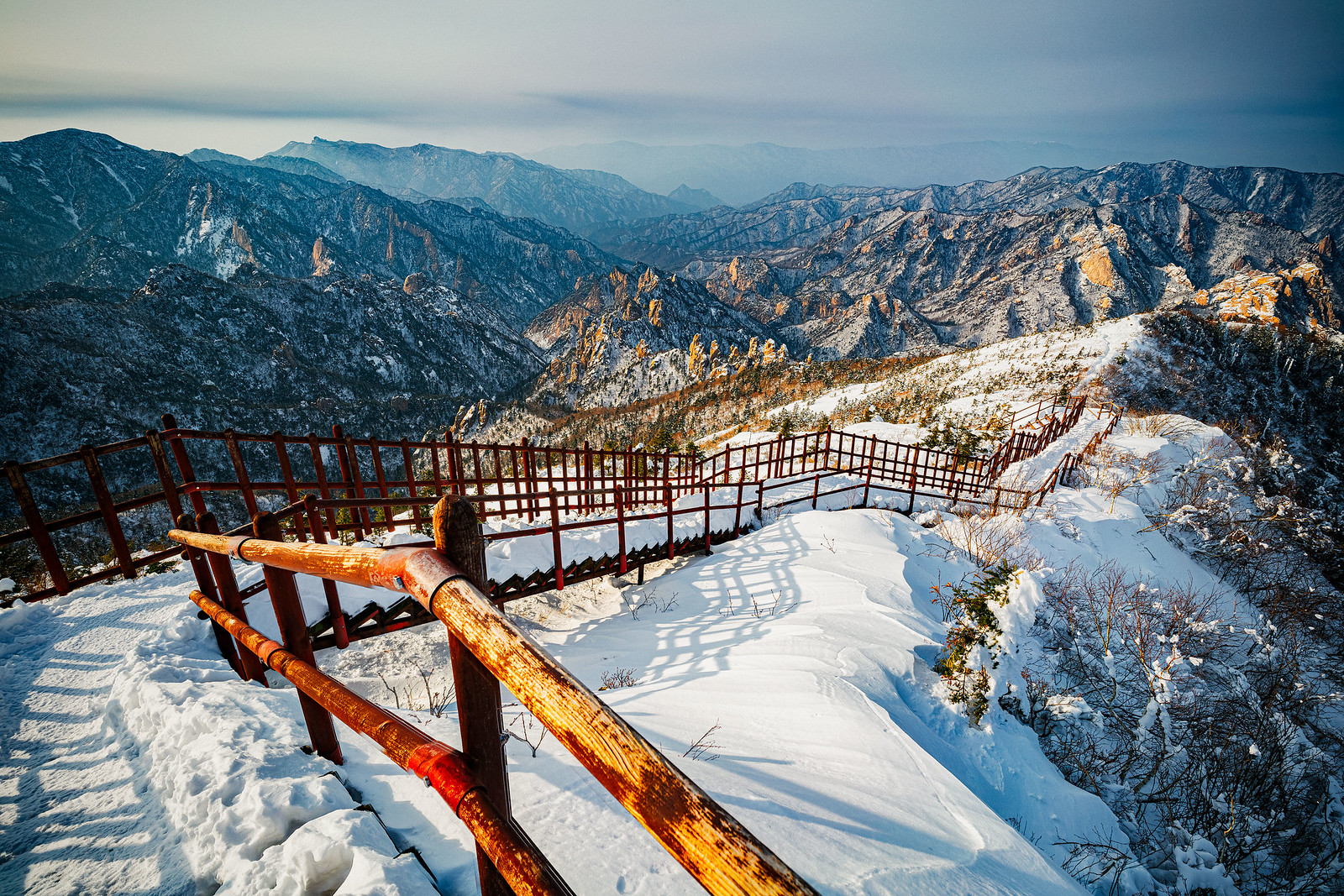 A big part of this, as far as I can surmise, is that the lineage of the Korean people is traced back to Mt. Baekdu (currently in North Korea).  Taking part in mountain hiking is in many ways a cultural right for Koreans, so they do the best they can to maxmize the access for everyone, while still preventing complete overuse damage to the natural resources.  The stairs and ropes provde obvious paths of least resistance, and keep the wear and tear from spreading wholesale across every square meter of their parks.

While this may make it seem like there is no hope of finding a wilderness experience in Korea, I have, in fact, found that it is very possible, as long as you select the right time and place to go.  There are plenty of ways to get off trail, primarily to do techinical rock climbing.  Additionally, participating in the culture can be fun. 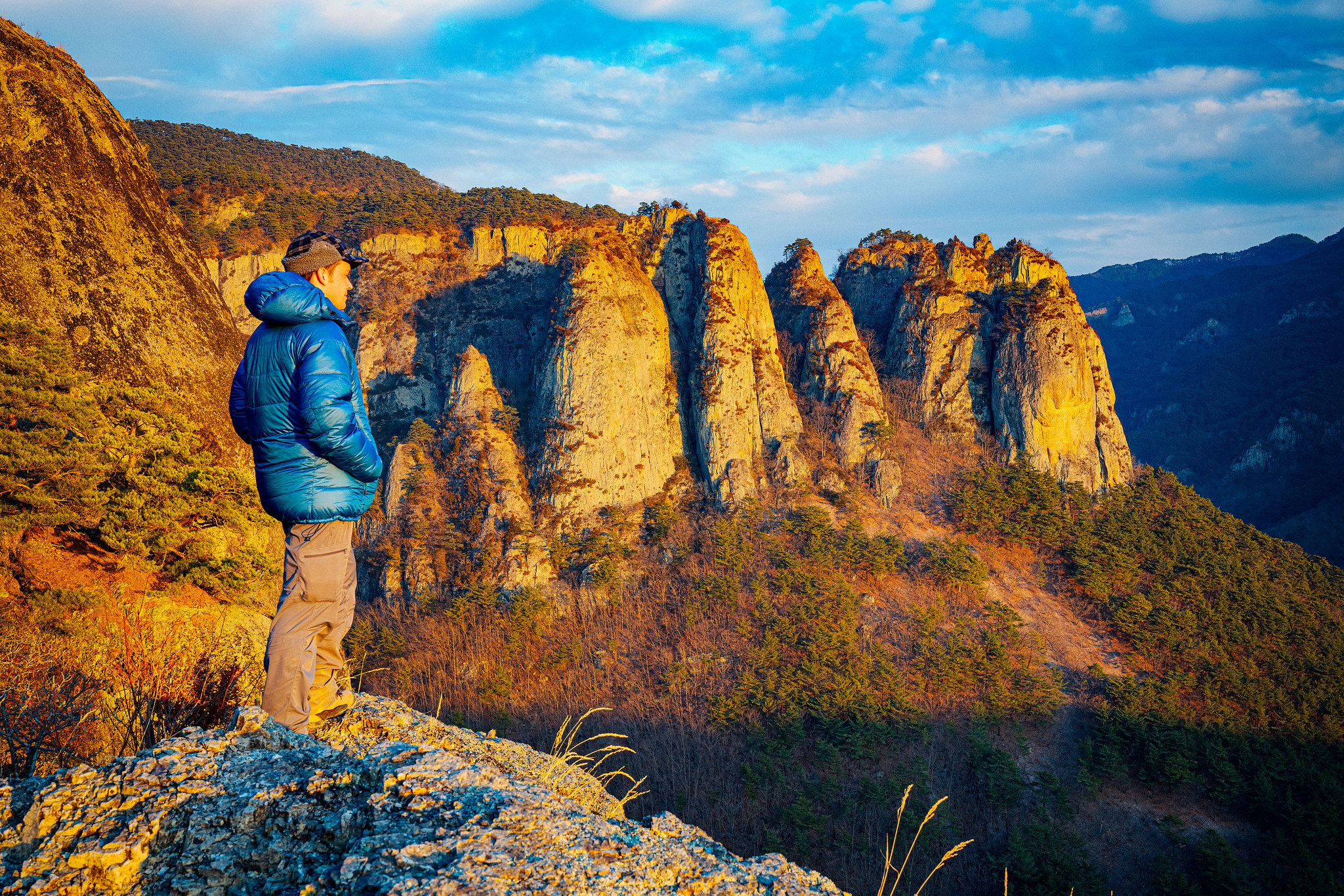 There are some fantastic provicial parks, however the best places to actually climb siginficant summits in Korea are in the National Parks.  Below is a list of the "Mountainous" national parks in Korea (almost all have mountains, or at least a big hill).

The 4 listed in bold are perhaps the most notable for summit climbing.

Jirisan is the largest national park, and has the highest summit on the mainland.  It features a good 3-4 day trek across the primary ridgeline that is considered a "Classic".

Hallasan is located on Jeju Island.  It is the highest summit in South Korea.

Seoraksan is the most rugged national park in Korea, featuring the greatest concentration of multi-pitch rock climbing, including some multi-pitch ice climbing if the waterfalls get cold enough to freeze.  While Korea is not a country with massive thousand meter+ walls of granite, Seoraksan is the closest thing to "the Yosemite of Korea" that you will find.

Bukhansan is interesting because it is located right in the heart of Seoul, yet still features many multi-pitch rock climbing routes.  Nothing of a grand scale, but very fun nonetheless.

Many of the other parks offer great opportunities for peak bagging, albeit generally of a non-techincal nature.

And lastly, for those with lots of time on their hands; there is a thru-hiking trail called the Baekdudaegan Trail.  It techincally runs from Jirisan all the way up to Mt. Baekdu  on the border of North Korea and China.  You probably won't want to do the North Korean sections, both due to lack of access and lack of any form of support for resupply along the route.  However, you can find a guidebook on Amazon to do the South Korean section. 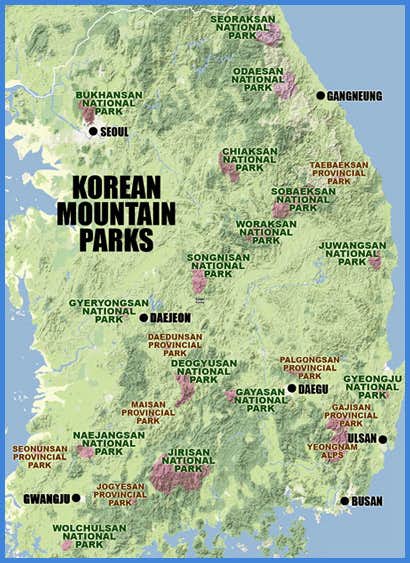 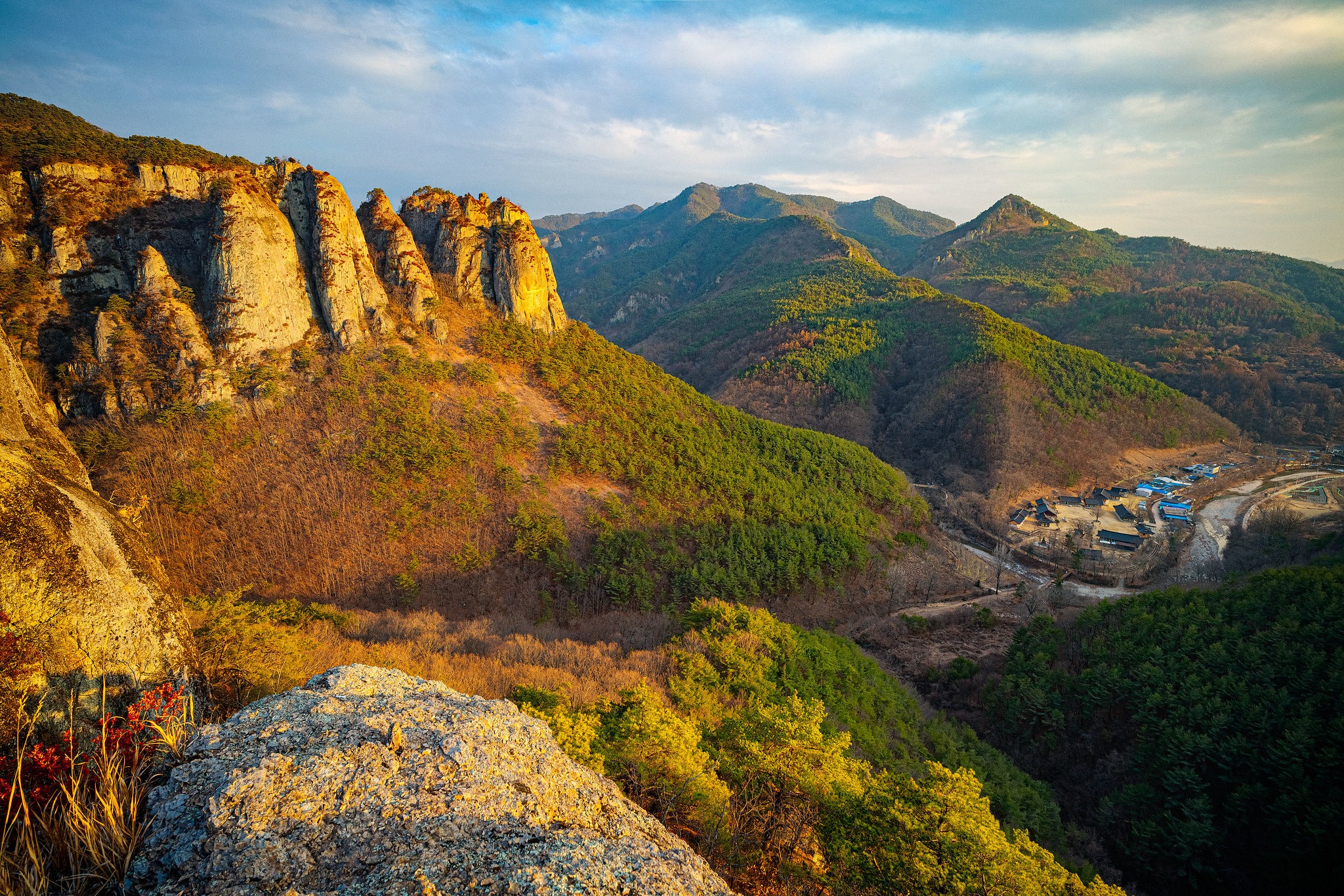 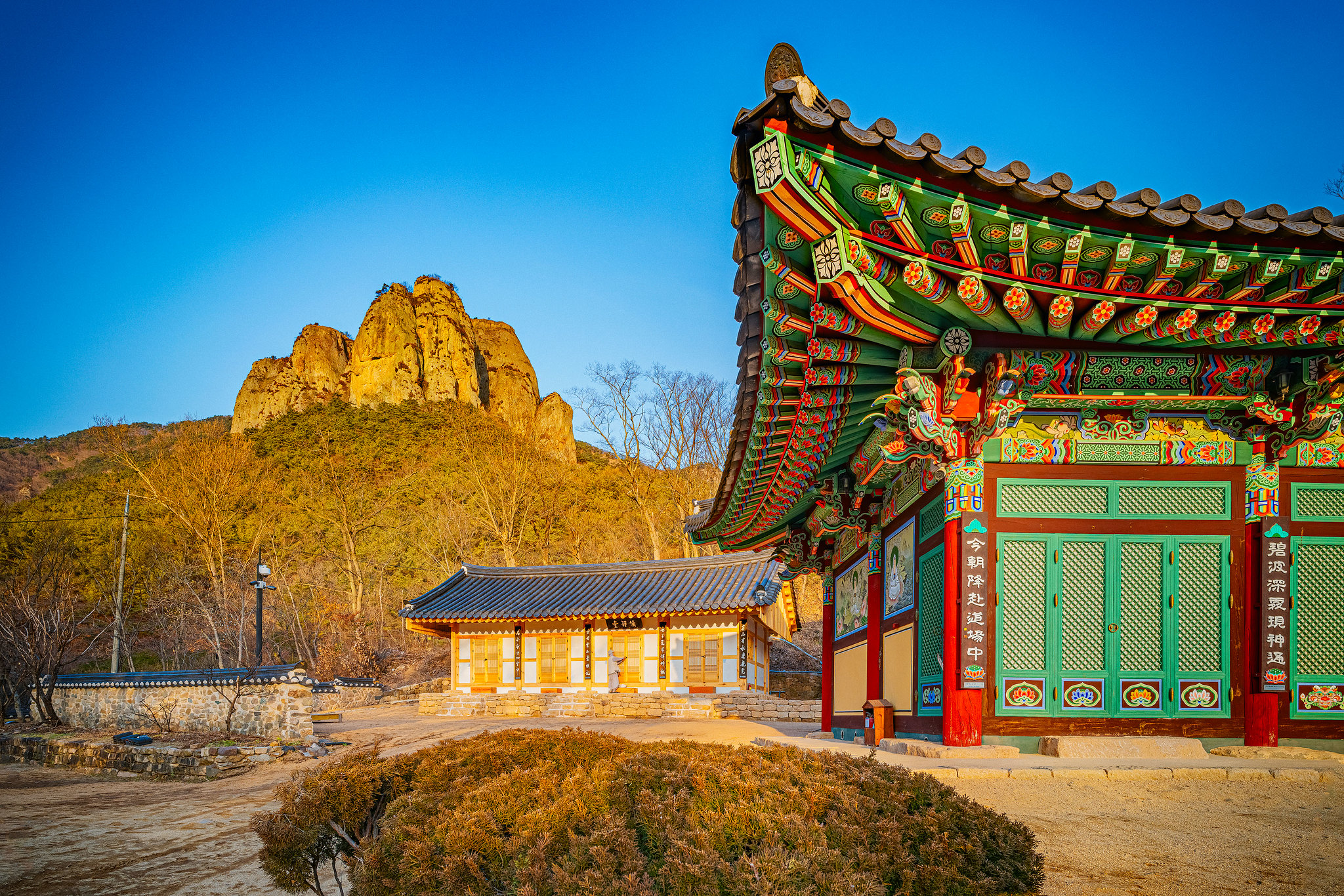 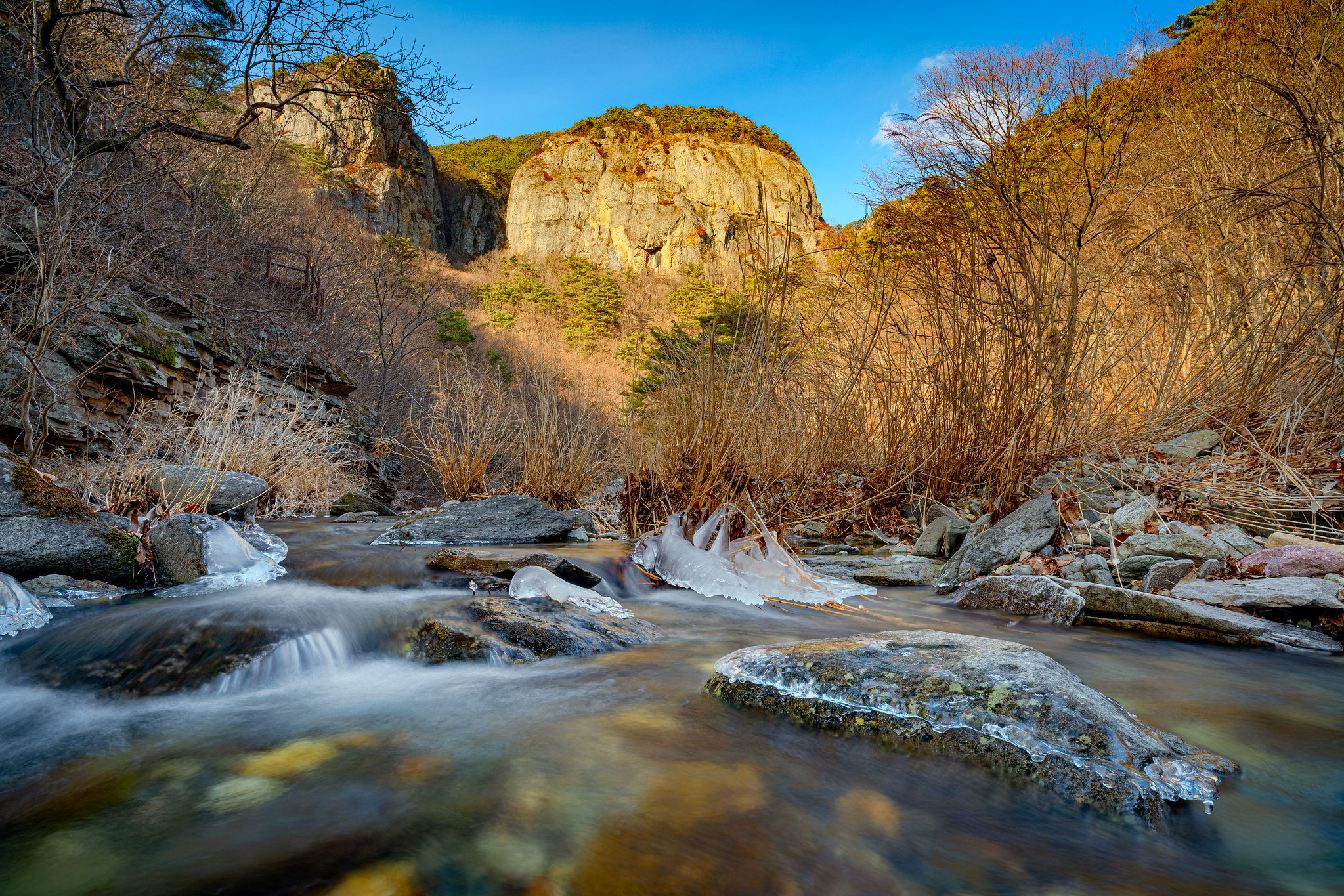 See the camping section at the bottom.  Otherwise, its fairly straightforward.

The Korean park service doesn' have the resources to fight forest fires like the USFS, and given the dense population, fires could be extremely damaging.  Thus, there are no open fires in any national park at any time, ever.  Not even backpacking stoves.  The only places you are supposed to cook are the designated cooking areas, such as the cooking room at a mountain shelter

The park service also closes trail systems down quickly and with little warning, for dry conditions.  I got forced out of Jirisan National Park, 2 days from my car, and left stranded in a random mountain village in the dark; because they were closing all the trails down for 3 months with no warning the next day and wouldn't even let me stay 1 night in the shelter to walk all the way back to my car in the morning.  Very cautious about fire hazard.  Sadly there is not an english language resource for park closures, and they don't even update them regularily.  In fact, my Jirisan expulsion closure was not listed online until 4 days after it actually started.  Best thing is just to ask when you arrive at a park, and then just be prepared for anything if you are doing one of the few long traverses.  There aren't many, most national parks are small enough that you can cross the entire thing in 10-16 hours of well-paced hiking. 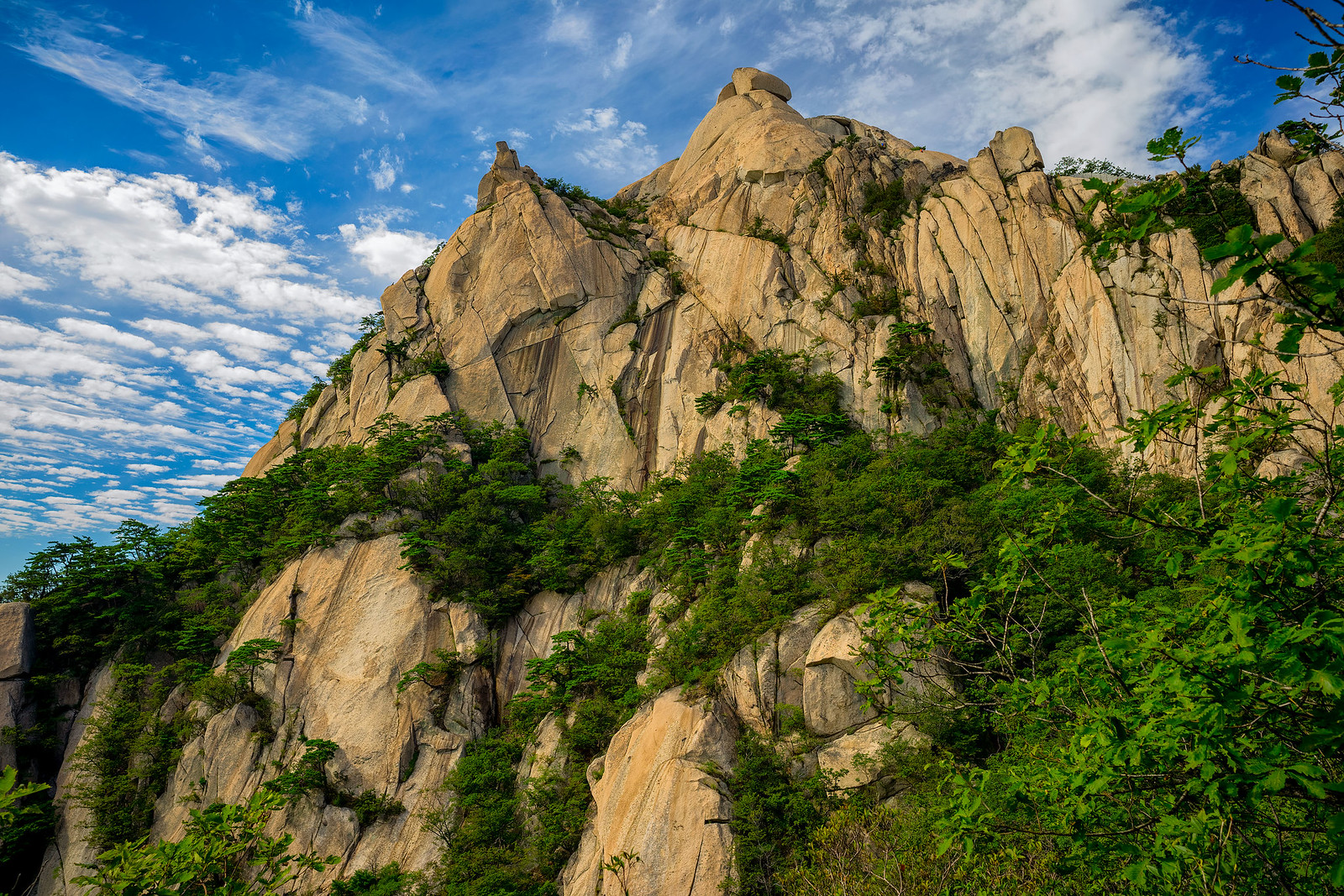 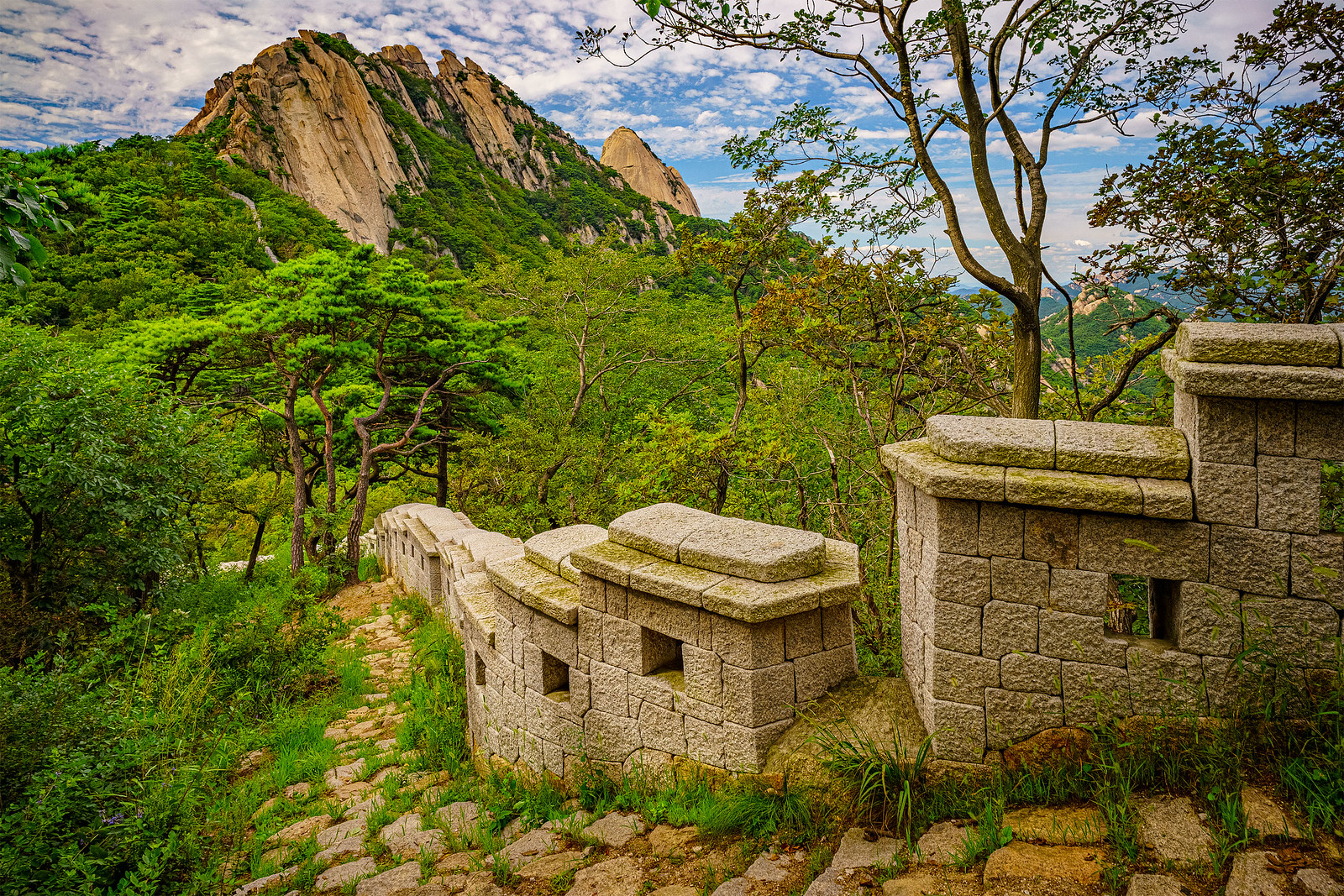 I don't want to repeat other resources, so here are some links which have some pre-existing info on hikes and climbs

And we can't forget Wikipedia: https://en.wikipedia.org/wiki/National_parks_of_South_Korea 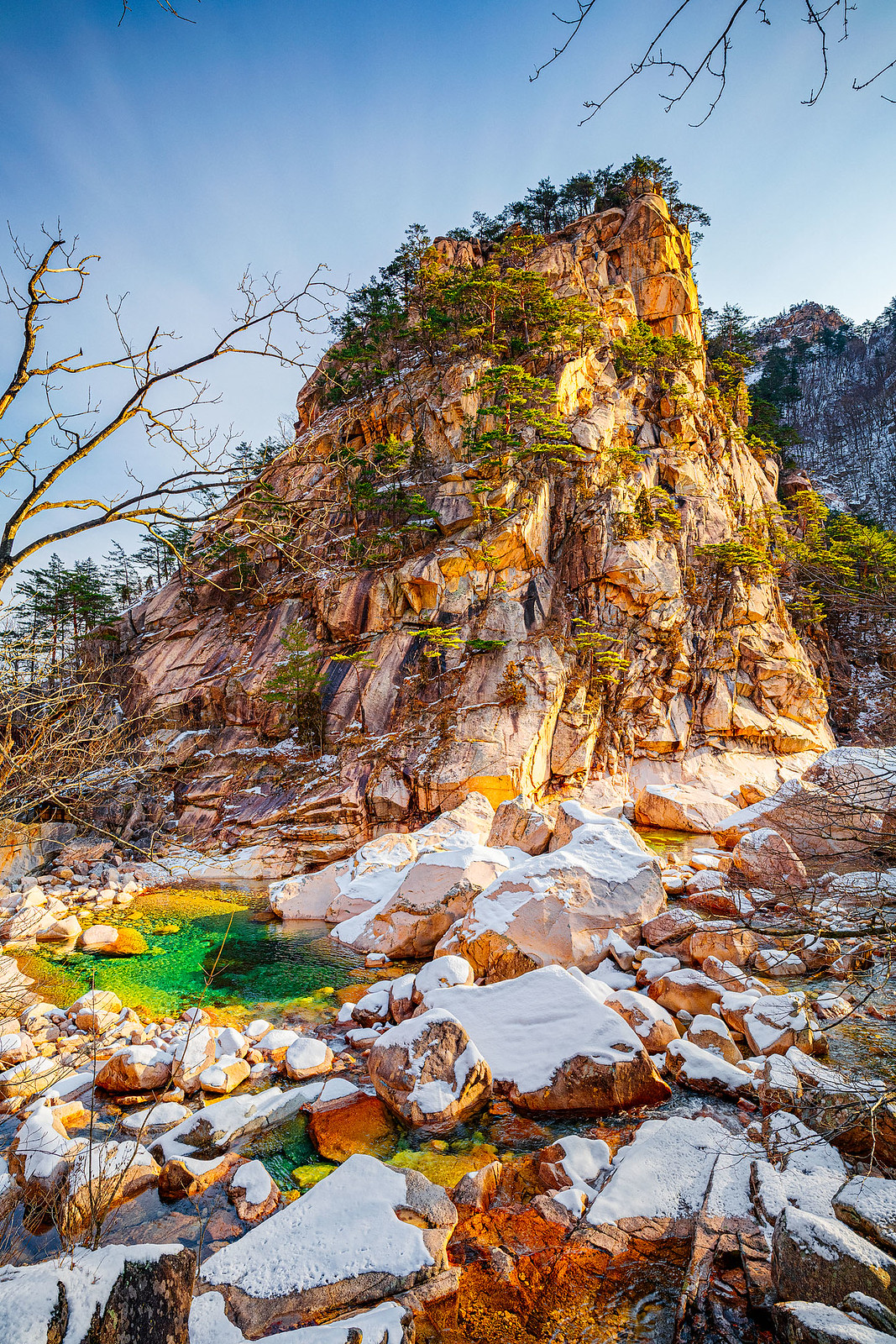 Wilderness camping is almost entirely illegal.  Refer back to the 52 million people who generally enjoy hiking crammed into a place the size of Kentucky.  Unless you find

definitive resource that says you can, I would assume you can't.

Campgrounds are available in and around most provincial and national parks, make sure to reserve spots very early.  Only in winter is it really possible to just show up and get a camp site.

Wilderness mountain shelters are also available at many naitonal parks.  These fill up even faster than camgrounds sometimes, so be sure to also reserve these well in advance. 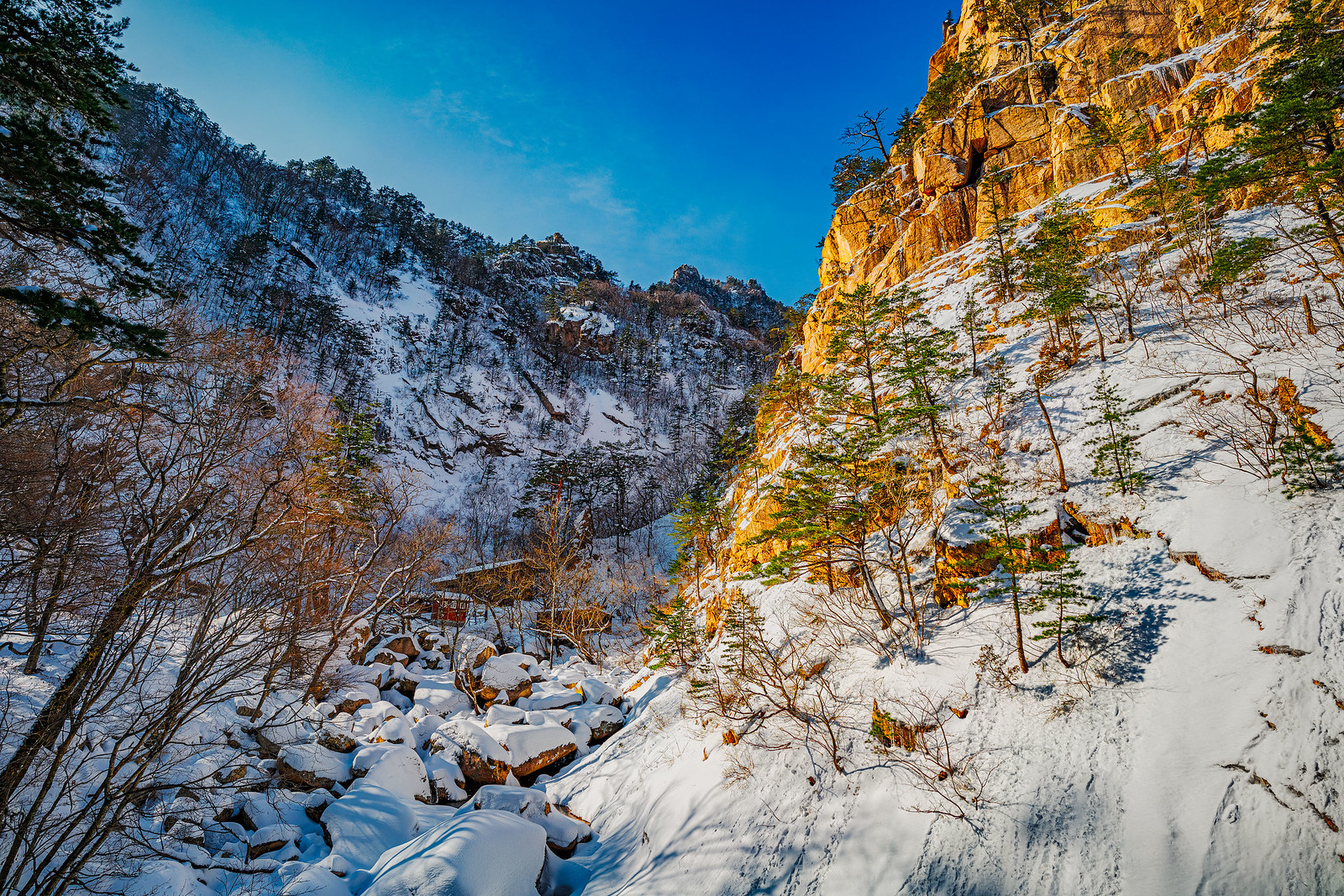 The reservation system for national parks is a bit quirky.  It is based on time-windows, so you can't just reserve a year ahead of time and call it good.  You have to make an account, see when your desired dates window opens up, and then wait.  Then, you sit at the computer 15-20 minutes before the exact time (in KST) your window opens up, and keep hitting refresh until it is possible to reserve it.  Campsites and Shelters can fill up in minutes-to-hours espeically in peak season, so this is your only option. 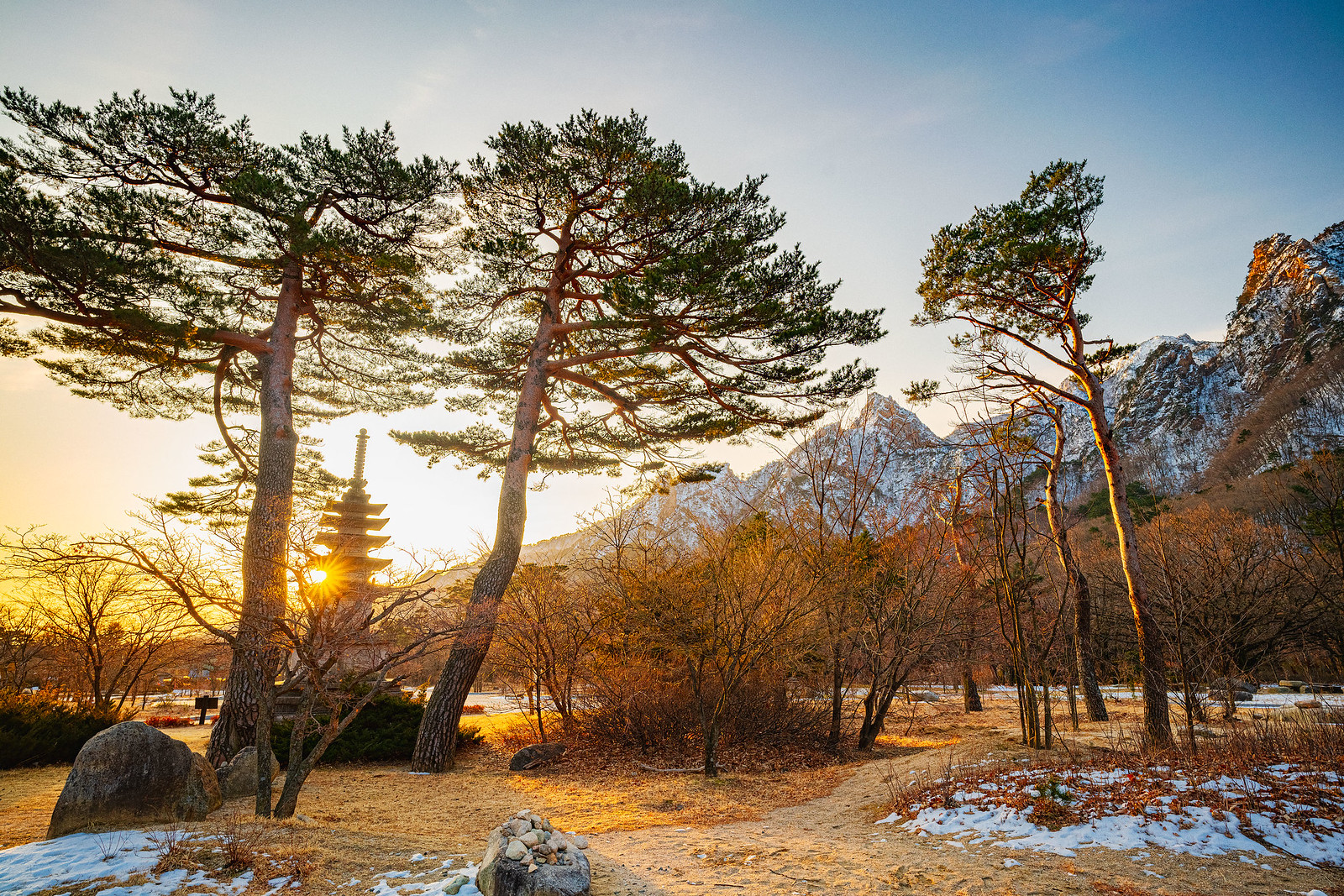 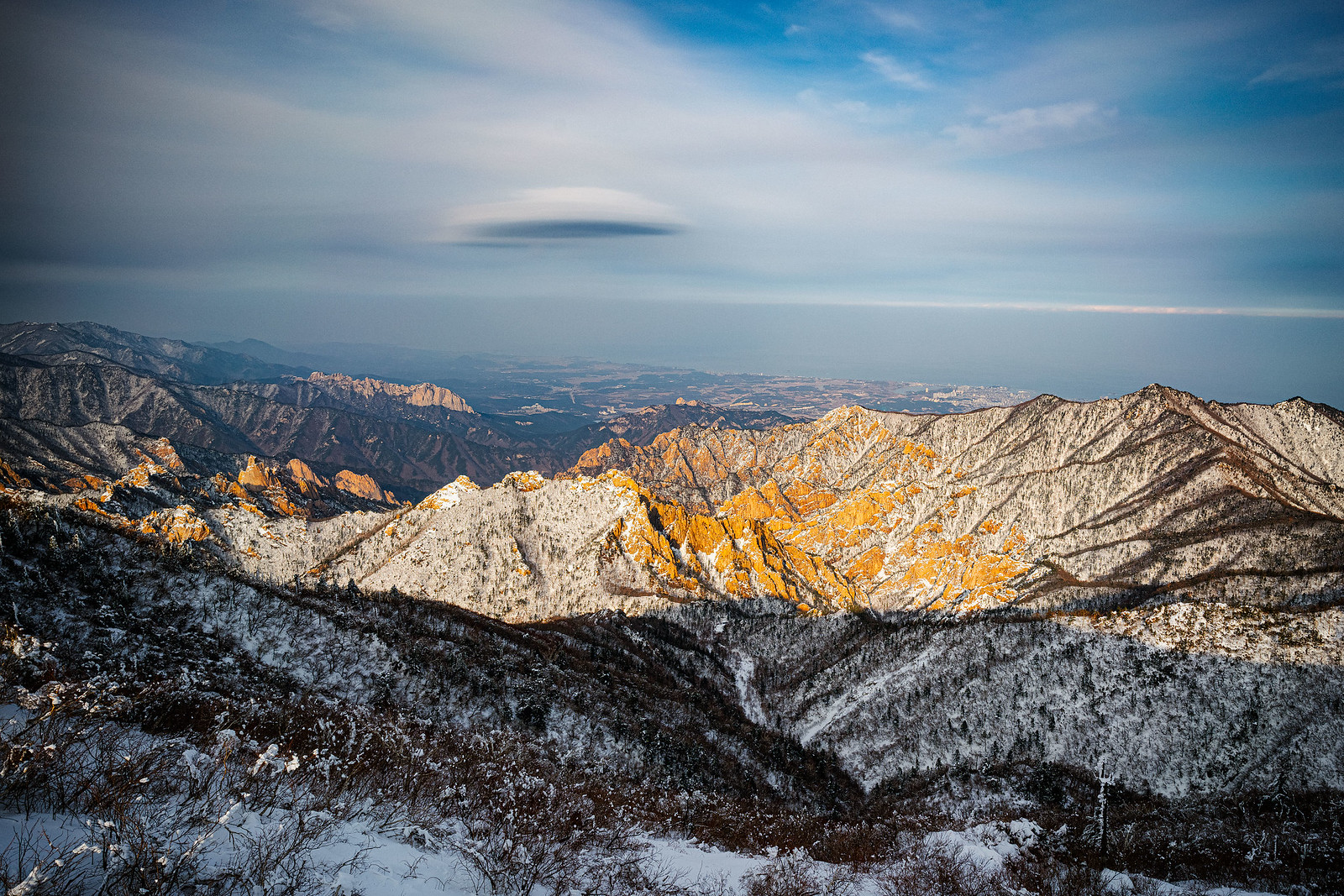