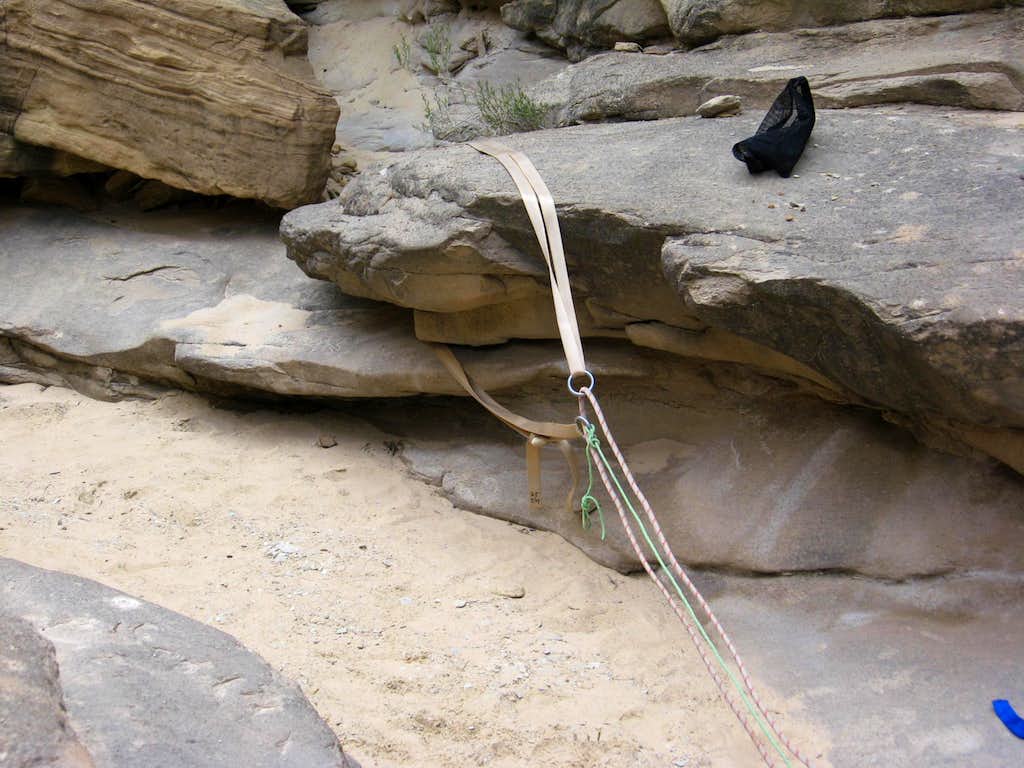 Retrievable anchor system in Enigma Canyon. No slings are left behind, and the canyon is left clean. Mike Kelsey photo.
« PREV NEXT »

or did the ring get wedged under the rock? ;-)

It worked. We do it all the time.

The trick is to test it first. First person down makes sure it will pull, so before the last person is down, you always know it will pull since it was tested first. If it doesn't pass the test, we don't do it.


This one is on the same trip is a more complicated system.

There are many ways to do it, but the one you are commenting on is the simplest and fastest. It's a different system with wall anchors, equalized anchors, etc, but same concept.

I must ask, how can you do a test pull, if the rope is still in place through the rings? With the rope through the rings, you cannot pull the anchor far enough (i.e. all the way through) to see if the "top" ring will not get jammed under the rock in this particular case.

I know you are experienced with this technique, as I have seen the discussions on this before. I think the retrievable anchor is an interesting idea, and there are cases where it can be important, particularly when one needs to conserve gear, but there are reasons why I personally would not bother with it.

I cannot see how something non-toxic like an anchor (piece of webbing and a rap ring) is harmful to the environment. Maybe if an animal eats it or gets it caught around its neck, there is a problem, but I can guarantee no non-human animal cares about the aesthetic impact of a rappel anchor.

So I must assume it is about the aesthetic impact for humans. But if the only people in the world that are going to see it are other canyoneers that are doing the exact same activity and setting up rappels in the same places, why would anyone care if there is an anchor there from the previous party? I mean, are some canyoneers actually bothered by the fact that some other canyoneers have the same interests and have done the same canyon? To me, it sounds like doing the Whitney trail but then complaining about too many people on the Whitney trail.

I must ask, how can you do a test pull, if the rope is still in place through the rings?

This photo wasn't added to be an ethics discussion, but...

Can’t do it with both strands of the rope through the rings. Only after the first one was down did we set the rope like this. Next time we’re out; I’ll show you.

There are four reasons that we do the retrievable method. You are right that it is pointless on the “trade routes” and probably counter productive.

1. In the case of Enigma Canyon, there are no signs what so ever of humans in the canyon. Nothing at all. Because of this, we try to do canyons or climbs clean (not always practical). If the route was already bolted or “slung” or had signs of use then we wouldn’t have bothered.

2. Leaving new slings or bolted anchors is illegal in many areas of the region. Some examples are Canyonlands National Park, Capitol Reef National Park, and Glen Canyon National Recreation Area. In Fiery Furnace in Arches National Park, leaving behind any hardware (or even posting routes on the net) is going to lead to an entire closure of the area to all climbing and canyoneering (closure has already been threatened).

3. In canyons with multiple anchors, such as Imlay in Zion, you would have to bring too much gear to resling every rap station. There are 42 rap stations along the route. Even at 5’ of sling a piece, that’s over 200 feet.

4. Last reason and possibly the most important is that it’s considered bad practice and ethics to leave a fixed anchor in a canyon at both the first and last drops on a “non-trade route”. People seeing a sling from above will consider the route “doable” and get the idea to go do it. When I was new it happened to me too. If they get the route info from a reliable source, that is better, assuming they are rather inexperienced.

Enigma Canyon is a “safe” canyon, so there is not much a problem there. Many canyons are very dangerous and in fact require 5.11+ of more in difficulty. Most are non reversable and once you begin, you are committed. In “X rated” canyons, if you can’t climb a pitch, you will either be trapped with only a slim change of rescue or you will die. Such routes, I will not add to Summitpost.

Here is an example of an “easy R”. A hard X is much more dangerous. You can’t climb a pitch than you will be trapped and rescue is near impossible. If you get injured than you will die.

Such is the reason why it’s never a good idea to leave fixed anchors at the first and last pitch of any “unbeta-ed” canyon. Definitely bad practice. On known routes, it really doesn't matter.