The highest point in the Crawford Mountains of Utah and Wyoming is Rex Peak. With 1,246 feet of prominence and no trees, the views are quite distant. Unfortunately, the nearby views aren't very good although they are a bit interesting. The summit area has been strip mined. The entire summit area is one big tailings pile so the peak is probably much higher than 7,996 feet now. A good road most any car could handle will take you within feet of the summit. Warning signs suggest walking around the Crawford Mountains with all the unstable mining slopes in the area isn't wise. The short trek up to the summit though looked safe. 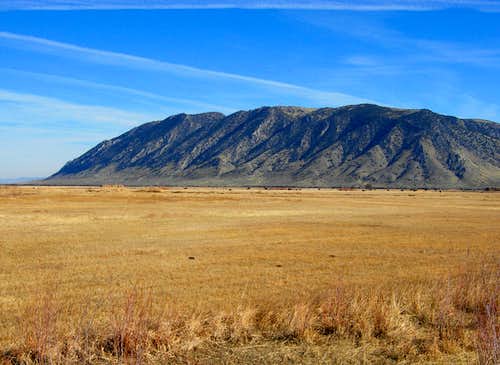 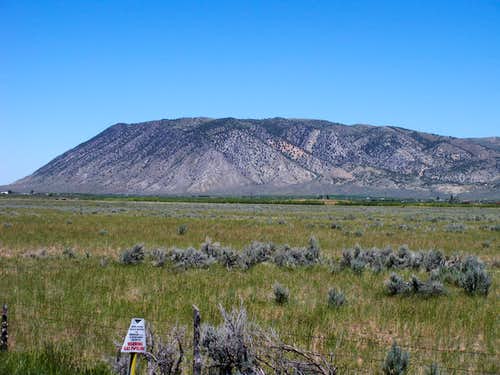 Just north of the town of Randolph Utah on highway 16, look for a sign saying Crawford Mountain Road. Follow it east toward the range for 5 miles. At the base of the range at 5 miles, cross Mine Road heading up into a canyon. Continue another 1.9 miles to a Y intersection. Both roads look good, both I believe go to the summit. I went right following this branch to the top. From the highest point on the road the summit is just feet to the north although the highpoint to the south with a tower will look higher. 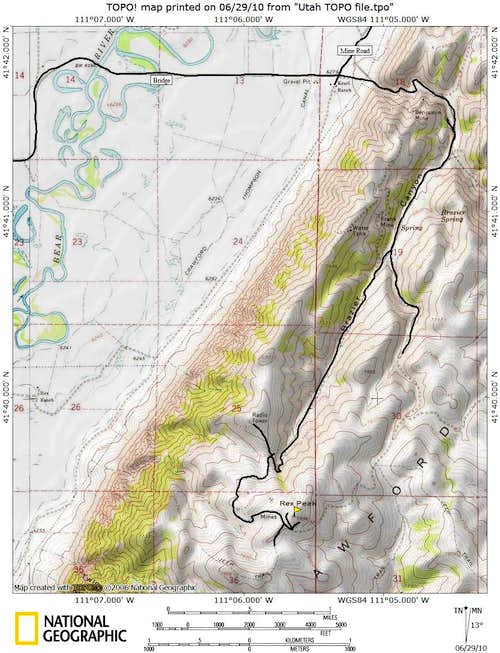 Not very good anywhere around as there is no shade and it's quite rocky. I have no idea why but the mosquitoes on this dry mountain were absolutely huge and very aggressive. The Monte Cristo Range to the west is much better with primitive and established campgrounds. Take Hwy 39 west of Woodruff to the Birch Creek Campground or drive north 30 minutes to Bear Lake where there are many lakeside campgrounds.

This information is from mountaingazelles informative page on Northern Utah Ranges. The Crawford Mountains are located near the Utah and Wyoming border by the city of Randolph. The mountains rise abruptly out of the valley forming a steep escarpment on the west side of the range. The range runs in a northeast to southwest direction. It is a popular place for paragliding. The Crawford Mountains were mined extensively from 1902 through 1972 utilizing both underground and surface mining techniques. The primary method for extracting the phosphate ore was stope mining. The highest mountain in the range is Rex Peak. It is one of the few named peaks in the range. The mountain is surrounded by dirt roads that were used to mine phosphate. Evidence of mining activity can still be seen today along many of the canyons in the range. The Crawford Fault is located along the western base of the Crawford Mountains and in the Bear River flood plain. The central part of the fault shows evidence for late Pleistocene activity. The Crawford Uplift is the result of two parallel fault systems. The east bounding fault is expressed as an eroded mountain front that is deeply incised by drainages. The younger west bounding fault is expressed as a steep mountain front that rises abruptly from the Bear River Valley. The flat, grassy Bear River Valley around Randolph conceals its elevation at 6,280 feet above sea level. The Bear River loops its way lazily past a short distance to the east of town, on its way from the 13,000 foot peaks of the Uinta Mountains to the south which can be seen in the distance, to the Great Salt Lake. Beyond the river, the valley abruptly ends as the face of the Crawford Mountains rise to nearly 8,000 feet. To the west of town, sagebrush-covered hills rise gradually towards the peaks of the Wasatch Mountains in the distance. Two creeks, Big Creek and Little Creek, flow out of canyons at the northwest and southwest corners of Randolph. This area is known for its cold temperatures. The coldest temperature ever recorded in Utah was in Peter Sinks in the Bear River Mountains. The city of Woodruff holds the record in a Utah community for having the coldest temperature at -50. The valley that the city sits in regularly has temperatures below zero during winter. The climate in the area is semi-arid with less than 14 inches of annual precipitation, much of this coming in winter as snowfall. The vegetation is mostly green shrubs and trees that is comprised of sagebrush and rabbitbrush. On March 14 of 1870, Randolph H. Stewart and other Mormon pioneers arrived at and founded Randolph. Cold winters, on account of the high elevation, made it a struggle to establish the settlement, but they were successful. The summers are pleasant with lots of sunshine and blue skies. Ranching is the major occupation today, as it always was. The city of Randolph was named after Randolph H. Stewart and is the largest city near the range. Woodruff is the smaller town located south of the city of Randolph. Woodruff Creek flows through a wide, flat canyon out of the mountains to the west and through the middle of the town. The valley is green with grass and even swampy in places, while the hills can look pretty dry at times. Woodruff was settled in 1870 by a group of Mormon pioneers from Bountiful, Utah. They named it after Wilford Woodruff, president of the LDS Church at the time, who was a frequent visitor to the area. 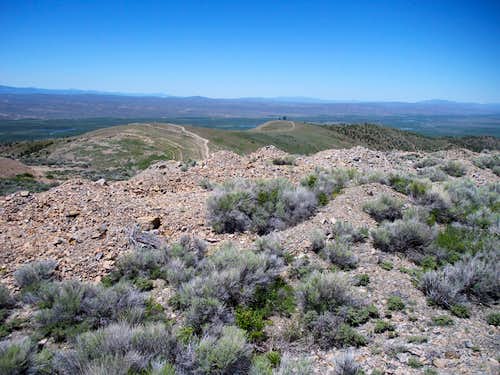 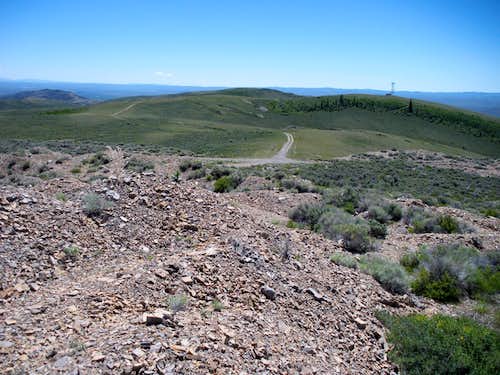 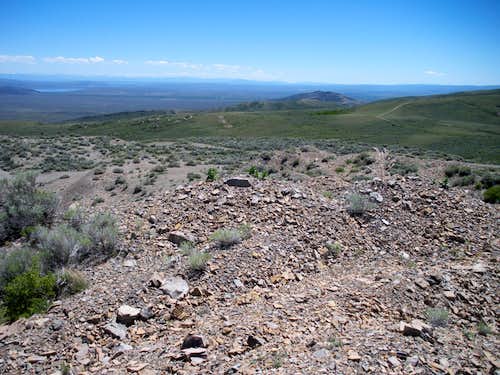 Looking South to the Uinta Mountains 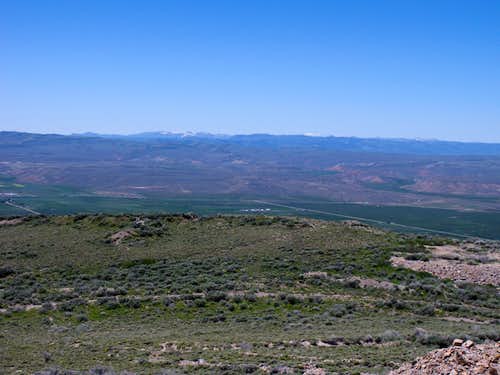