The Rhyd-Ddu Path is one of the easiest paths to the summit of Snowdon and is also one of the quietest. Although it doesn’t boast the excitement of Crib Goch and Y Lliwedd and the views from the route don’t quite match those in the north, it is onot without merit and offers some beautiful and less familiar views of this part of Snowdonia. Until relatively recently (and not until the first series of Ordnance Survey Landranger maps were published) the path was known as the Beddgelert Route, and was the route taken by Thomas Johnson in 1639 on the first recorded ascent of the mountain. When combined with the Snowdon Ranger Path it becomes a hugely enjoyable and satisfying horseshoe.

The Rhyd-Ddu starts at the car park in the village if Rhyd-Ddu (SH 571 525) which is also located on the A4085 between Beddgelert (SH 590 481) and Caernarfon (SH 482 625). The car park is also serviced by the Snowdon Sherpa bus service which has various stops around the mountain and runs from Llanberis, Bettws y Coed, Caernarfon, Beddgelert, Bethesda and Porthmadog. Be sure to check timetables first as you don't want to end up missing the last bus and find yourself stuck, of course in these situations hitching is always an option. 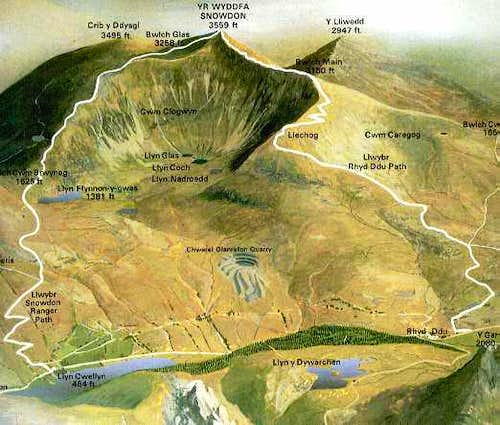 The route starts at the carpark on the A4085 just south of the village of Rhd Ddu (Black Ford). The first few meters of the route follows the track of the Welsh Highland Railway, before starting properly at the kissing gate just past the carpark toilets, where it winds between rocky outcrops. After a few hundred meters the path forks and the route takes the right-hand path which is helpfully indicated by a wooden post nearby.

The path passes the ruined and deserted remnants of the copper mining industry, and at around 750m the route reaches a crossroads in the paths; following the left path through a kissing gate (the right is an alternative start to the route and straight on takes you over to join the Watkin Path). A section of sporadic boggy is rewarded with some very easy scrambling as the route assends Llechog Ridge (Rocky Place). From here, a cairn-marked route leads up the exposed ridge, which is often open to the prevailing winds. A short but very steep and slippery section brings the route to the junction with the S. Ridge route and the two paths together follow the sharp Bwlch Main (Narrow Pass) ridge towards Snowdon's summit. The exposed nature of Bwlch Main restricts it to the experienced and well-equipped mountaineer in winter conditions, although it is unlikely to pose any difficulties in summer. Another steep section brings you to the monolith marking the joining of the Watkin Path. From here, the summit is only a few meters away to the north.

Just a good pair of boots, waterproofs and some lunch. If walking in winter conditions make sure you also carry an ice axe and crampons.

The Mountains of England and Wales: Volume 1 Wales (Cicerone Guide) by John and Anne Nuttall 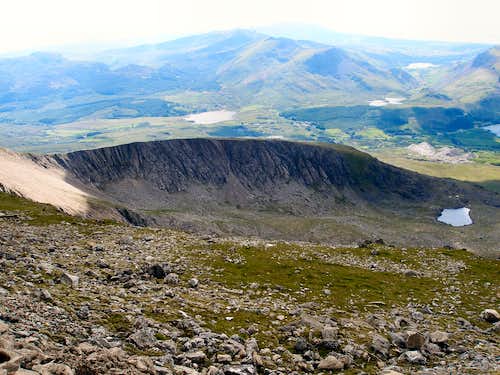 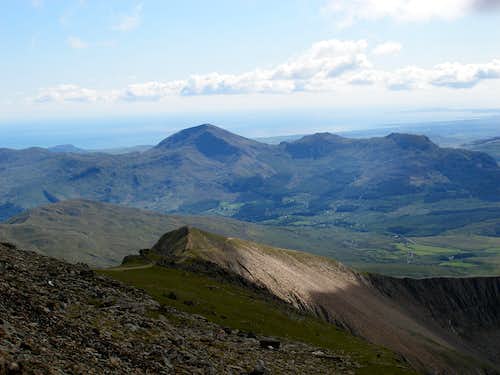