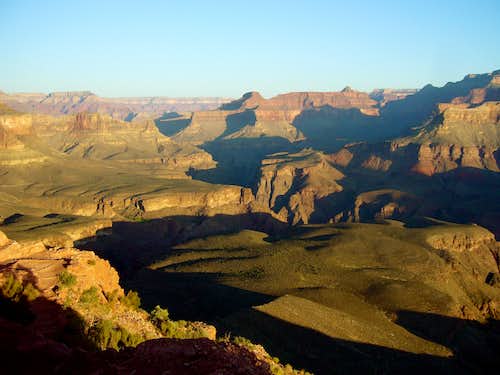 From our camp above the rim, I prepared breakfast before breaking camp and the initial drop from the north rim trailhead. Our original intention was to hike to the Colorado River, spend the night at hike back out the next day. We hit the trail and down to what we thought was the Cottonwood Camp. Thinking we went 7 miles in two hours in the steep descent, we got a little cocky. There was an open camp that included a cabin and will we soon found a helicopter landing pad as well. Spending little time we started off again and as we turned a corner, a helicopter came up through the canyon and landed were we just had been.

A few miles later, we strolled into Cottonwood Camp to realize the prior stop was Roaring Springs. Still having 7 miles to Bright Angel Camp, the heat intensified and we dropped into the narrow canyon creating an oven with its dark, boxed in walls. The Bright Angel river proved on a numerous occasions vital offering a place to soak everything we carried. In this intense heat which may have caused this delirious suggestion, but it was at this point I suggested we up the stakes and complete a rim to rim to rim with a midnight push for the South Rim mountaineering style. Seconds later the deal was complete and new quest was set.

Climbing the Grand Canyon is hard enough but the added summer heat makes it twice is difficult. Our plan was to beat the heat and get up around midnight, cook breakfast, and leave for the South Rim at 1 am getting up to the summit at 5:30 am, perfect time for a sunrise. The South rim is another 7 miles from Bright Angel campground with an elevation gain of an approximately 4200 feet. As we strolled into the camp we knew we had a long night ahead requiring 28 miles and 13,000 feet elevation gain an extreme heat the last 14 miles. We enjoyed the cool camp as the river ran running through it, explored the Colorado River, and went to bed at as night broke with the alarm set for midnight. 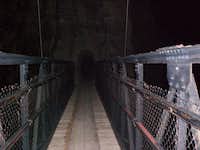 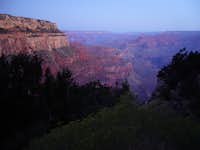 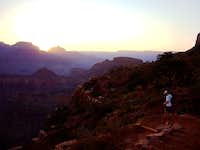 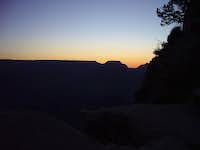 The alarm sounded and we woke up to a crystal clear night. After breakfast we left camp at 1:05 am dawning our headlamps. Like any mountaineering trip, traveling at night gives one another sense of adventure. With only a single beam of light, steps are calculated with the hidden darkness below. We continued to ascend the South rim through the dark night and it was all to our own on THIS very night. Nearly reaching the top we heard something in the distant. Being a pair of deer dropping directly down the face, it heighten the awareness we were not alone on this south face. Soon after we were met by a team of mules taking supplies to the camp deep and dark below. We turn off our headlamps not to bother the mules as they passed, and the mule driver clearly looked in the moonlight from another era as the historical mode of transportation in depths of the night was a step back in time.

We arrived at the rim at 4:30 am and the chilly air flowing across the trees biting at the little gear we had, a small nap was attempted on a nearby picnic table hoping for the morning sun, but this proved difficult because of our new found stillness. Modern conveniences make world treasures such as the Grand Canyon easy to see; however this also removes the sense of solitude. I felt terribly connected after experiencing the Grand Canyon in the night with a mules train delivering supplies. It was a moment in time but nonetheless, this night the Grand Canyon was my alone.

We rested at the South rim for 20 minutes and decided it was best to keep moving instead of sitting in the dark morning chill. As we left the rim at 5:15 am, the views softly opened with each step we took. There is no question why the South rim is so popular with its instant views and shorter approach to its sister on the north.

We arrived back at camp at 8:30 am and took a quick nap before heading up the North rim. This however proved useless because the bugs and constant interruptions from the other campers. We decided to keep moving and set off for the final leg or second half of the 14 miles in the soaring heat up 6300 feet above. This was most trying coming through the box canyon. The previous day, the descent and river was in our favor, but now the route was reversed.

The climb uphill to Cottonwood Camp brought us to the familiar spot nearing 12:45 pm taking a short break before the push for Roaring Springs dinner in the afternoon. We had the usual rice and beans and started off at 3 pm for the final and most difficult part of the journey.

We had been on the move since 1 am and the heat extracts energy from your body much different than traveling in colder conditions. The final 4.7 miles up proved to be a mental endurance challenge, but like all other climbs I had no other choice but to push through whatever it took. Getting back to the car at 5:30 pm, I hobbled into the Jeep, took much needed showersat the campgrounds and started the drive to Zion National Park, our last stop of the journey across the Great South West. The distant western horizon, as we cross southern Utah included a magnificent lightning storm that would prove just south of our destination and a future home I had yet to envision.