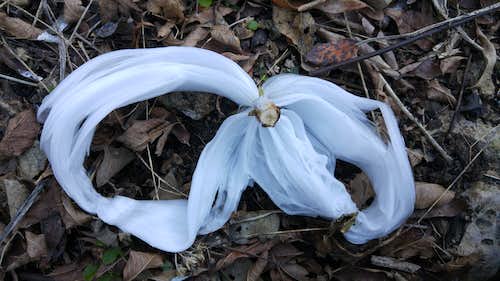 featured recent photo
Dewdrops are nice, but on mountaintops, when the mercury drops and the winds rise, condensation takes a more spectacular form: rime. This album is dedicated to rime ice in all its manifestations, on any mountain worldwide. Please contribute your best close-ups. Glaze ice (verglas) is OK too.

rime
Rime:
1) buildup of ice (in the form of small white crystals) when small liquid droplets (fog) freeze upon contact with a cold surface.

2) Any crusty crystalline buildup, like the salt around a margarita glass.
See wikipedia: rime (frost)

Hoarfrost: buildup of ice (in the form of crystals, often delicate and feather-shaped) when water vapor in the air condenses as ice on a surface.
See wikipedia: hoarfrost

In short, the main difference between rime and hoarfrost is that rime is the result of freezing fog, Hoarfrost forms in the absence of fog. Hoar generally won't form on a windy day, but rime often grows toward a prevailing wind, forming spectacular horizontal shapes. Compared to rime, hoarfrost forms larger, more delicate crystals, but it is often difficult to tell the two apart; when in doubt "rime" is never entirely wrong (see definition #2).

Glaze ice: glassy ice formed when a relatively large amount of liquid water (a raindrop, or several) freezes while in contact with a surface. The ice is hard and mostly clear, like ice cubes.
Glaze ice is the result of freezing rain (sometimes fog), or freezing after rain or heavy fog, or sometimes results after rime or hoar has melted and then refrozen.

ground frost
feather frost a.k.a. "frost flowers" or "ground frost" or "ice wool", requires a waterlogged surface (such as an old piece of wood) exposed to cold air. The result looks a bit like hoarfrost or rime. Woolly tufts of hair-thin crystals grow best from wood; coarser columnar crystals can emerge from banks of mud, especially if there is moss or other debris on the surface.


For more about frost, and about winter precipitation in general, see this guide to frost

Gorgeous pictures, whenever I see rime I know I am in the mountains and in conditions when most people are not.

Great idea for a page!

It's nice to see the smaller details of the outdoors getting some attention :)

One of my favorite albums.....No doubt!
Thanks for every single post!

Thanks Igor! Don't forget to thank the photographers by voting for your favorite photos!