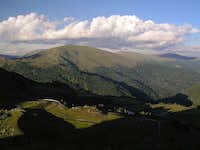 East slope in November
Summits, rising close to important high passes allways attract a lot of visit. Ascending them means a little altitude difference if in addition the ascent is technically easy and even supported by cable-cars or ski-lifts, then such mountains are very frequented. And Rinsennock is one of such summits. For the Nock group it is quite high, but from Turracherhoehe pass, 1795 m the ascent takes us only one good hour. If in winter we use the Kornock cable-car (to the East and West of Turracherhoehe pass there are ordinary ski terrains), which takes us to 2193 m, the summit ridge is only a matter of some 20 minutes.

Rinsennock is standing west of Turracherhoehe pass. Its north-eastern fore-summit is called Kornock, 2193 m. From Rinsennock summit the main ridge of Northern Nockberge is running towards the North-west to the summit of Koenigstuhl and further towards Katchberg pass. Towards the North Rinsennock is lowering into the valley of Nesselbach, finishing on its upper part with the beautiful meadow of Winkler Alm, 1823 m. On the Eastern side the mountain is falling down into the valley of Holzbodenbach, where the road on Turracherhoehe goes.

Towards the south-east Rinsennock is sending a nice, grassy ridge, called Eggenriegel. This one offers a beautiful and easy winter ski tour. Towards the South Rinsennock is lowering down into Winkelbach valley, where the panoramic Nockalmstrasse goes. 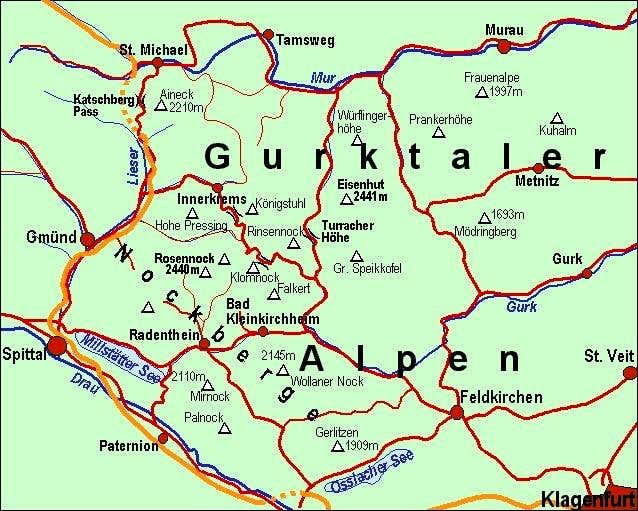 Turracherhoehe pass, 1795 m, is connecting Drau valley on the South and Mur valley on the North. It is the first pass East of Katchberg, further to the East Flattnitz pass and Perchauer Sattel come. So, from the North you exit the Tauern highway in St. Michael, drive by the river Mur towards the East till Predlitz and there turn right (southwards) up to the pass. From the South you reach Patergassen either from the West (Spittal via Radenthein and Bad Kleinkirchheim) or from the south, from Villach or Klagenfurt via Feldkirchen.

As most of the highest summits of Nockberge are of a quite same altitude, being scattered around the broad area, also Rinsennock offers a nice view in all directions. We are standing on the very north-eastern part of Nockberge, but the other Gurktal Alps are of the same character, so we are in the middle of the hilly landscape, all around us we can see smooth, rounded mountains, easy for hiking in summer and fine for skiing in winter. In the distance some main ranges of Alps can be clearly seen: Schladminger Tauern on the North, Hohe Tauern on the West and Julian Alps and Karavanke/Karawanken on the South.


Rinsennock summit panorama. High peaks are boiling on the south-western and western horizon. 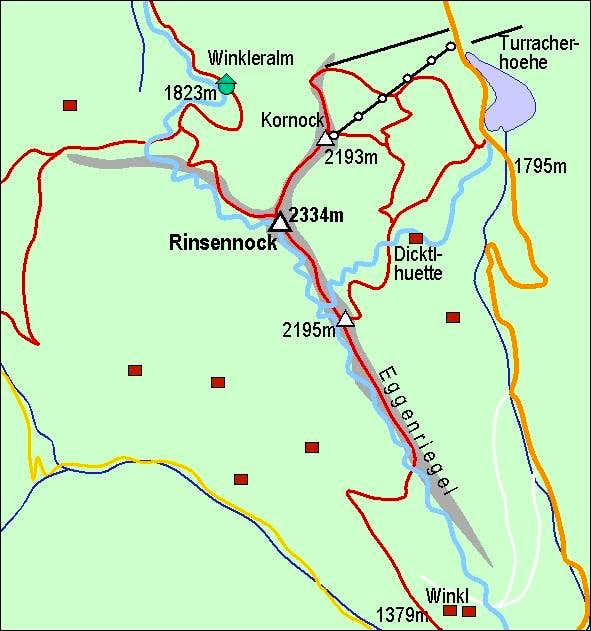 1. From Turracherhoehe pass, 1795 m. You start on the saddle and go by the marked path westwards firs on Kornock, 2193 m (upper station of cable-car) and from there by Rinsennock's NE ridge to the summit. 1:30h.

2. Over the eastern slopes: From Turracherhoehe pass, 1795 m, you ascend by the marked path, which crosses Rinsennock's E slopes. So you reach the point 2159 m on the SE ridge, where you turn right to the summit. 1 h 30 min.

3. Over the Eggenriegel. You start in Winkel, 1379 m, which can be reached by a forrest road from the Turracherhoehe road. From the hamlet you go northwards by the marked path, which first ascends the grassy SE ridge of Rinsennock and then follows it to the top. 2 h 30 min.

As Rinsennock's slopes are not very steep and rocky, in summer also other ascents to the top are possible.Ski tours East slope Winkleralm Ascent: You will most likely in winter ascend the summit of Rinsennock from Turracherhoehe pass. By regular ski pistes or using the cable-car you first reach Kornock, 2193 m. From there follow the Rinsennock's NE ridge to the summit. 1 h 30 min from the road. The ridge from Kornock to Rinsennock is steep on some parts, but unless icy there are no real troubles. Almost allways there are foot steps to the summit. If hard, use ice-pick and you'll be ok. By this ridge you'll probably not ski down, unless there's really enough snow and conditions are ideal.

1. The South-east ridge. This is the most beautiful ski tour (more than 1000 m). The long and grassy ridge brings you over Eggenriegel down to Winkl, then you must go to the main road and somehow find the way to reach Turracherhoehe pass again - with a ski-bus, hiking, walking, or neither of these if you have two cars.

2. Over the Eastern slopes. This is a medium hard downhill, the upper part is steep and can be done only in good conditions (not if icy and not when there's an avalanche danger). You first ski down the SE ridge till the point 2159 m, before which you turn left into the E slope. The first 350 m from the ridge are ideal (in good conditions), on the lower parts you'll need to find a passage through steep ravines down to Dicktlhuette (you can see it all the time). Here in the rugged terrain you'll often find powder snow, so come when there's enough of it. From Dicktlhuette towards the E and NE by a cart-road to Turracherhoehe.

To ascend Rinsennock you don't need to sleep on the mountain. On Turracherhoehe there are many hotels and private houses.

You can climb Rinsennock in any season.