Roccabiasca is a beautiful summit to climb, interesting in all seasons, like most of the mountains of the Appennino Parmense, which can be reached even in winter with not difficult Normal routes. An important branch South-North oriented starts from the main boundary ridge between Emilia-Romagna and Tuscany nearby Monte Brusà, taking the aspect of a rocky ridge-line, showing towers and cliffs beyond the col named Sella Brusà. This ridge becomes more and more steep, giving origin to Monte Roccabiasca South ridge, separating the Badignana Valley on the Eastern side from the Guadine Valley on the West side. Belonging to the Parma Apennines, Roccabiasca is one of the highest peak lying entirely in Parma province and it's a proud looking peak if compared to the standard of the surrounding mountains, wich show more soft shapes. Indeed the Eastern, Southern and Western sides are rocky and steep and only the wooded North side descending to the Forest Road running between Cancelli and Lagoni is inclined and covered with forests.

The West face - overlooking the Pradaccio Reserve - shows some interesting and often climbed ice-gullies. Roccabiasca is quite a frequently climbed peak in reason of its central position, allowing a wide view over several other peaks surrounding it, and also in reason of its interesting climbing routes, making it a popular mountaineering, ski-mountaineering and hiking destination all round year.

Parma is the nearest town to the area; it’s a nice 200.000 inhabitants town with a small airport offering some domestic flies and only a few international ones. A good choice of international flies is provided by Milan and Bologna International Airports, both situated at a reasonable distance (Milan 110 km., Bologna 90 km.). Parma is linked to Milan and Bologna by A1 motorway and to Tuscany by A15 motorway, so logistic is not a problem.

Follow the SP 665 (Massese) towards Langhirano and Capoponte; in Capoponte turn to right, reaching Corniglio, Bosco di Corniglio and the locality named Cancelli; at a road fork turn to left, following the shady road running inside the beautiful Forest Road towards Lagoni (Twin Great Lakes). 65 km. from Parma - Approach from A15 (Autocisa Motorway)

- Approach from A1 (Autostrada del Sole) If you’re getting there from A1, coming from Bologna or from Milan, take Parma main exit.

Walking approach to West face Quite a long approach is required to get the interesting ice-gullies lying on the West face of Roccabiasca; mountaineers and sky-mountaineers are not allowed to follow the shorter approach via the Pradaccio Lake, lying inside an Integral Reserve. The only possible approach is via Capanne di Badignana and the saddle named Sella Brusà, then downclimbing the easy snowy gully starting from the saddle and getting to the bottom of the West face.

Main routes to the summit

From Capanne di Badignana m. 1478 follow the right marks (quite visible also in winter), entering the beech-wood. Cross a stream and climb a steep snow-slope, then turn to left, climb another snow-slope. Head to left, doing a brief downclimb, after which the stunning East pyramid of Roccabiasca is appearing. A short climb is leading below the left edge of the rocky East face; traverse all the face toward right on a steep snow-slope, then turn to left and climb the gently snow slope quite in view of the summit cross. Get to the summit straight or heading to the right ridge.

This route is an easier and shorter way to get the summit, but less interesting and panoramic that the previous route. This route is starting on the Cancelli - Lagoni Forest Road close to the Eastern borders of Guadine-Pradaccio Reserve and it's just adviced as a shorter and different route to downclimb the peak.

From Capanne di Badignana follow the main path rising straightly toward the boundary ridge (don’t follow the right marks, leading to Roccabiasca by its Normal route), getting to Sella del Brusà, separating Roccabiasca (on the right) from Monte Brusà (on the left). Once getting to the Sella Brusà  (about 30 minutes from Capanne Badignana), leave the main path which heads towards the main boundary ridge and turn to right in the direction of the obvious rocky ridge.

Difficulty: Alpine PD+
Difference in level: 520 m from the road Cancelli-Lagoni
To be climbed only in wintertime
Essential gear: bring rope, ice axe and crampons

An interesting ice-climbing not too demanding.  As told in the previous chapter the only possible approach is via Capanne di Badignana and the saddle named Sella Brusà, by downclimb the easy snowy gully starting from the saddle and getting to the bottom of W face.

Descent - Two possibilities: along the panoramic East side normal route to Badignana or along the other normal route getting directly to the Cancelli-Lagoni Forest Road (shorter but less interesting). 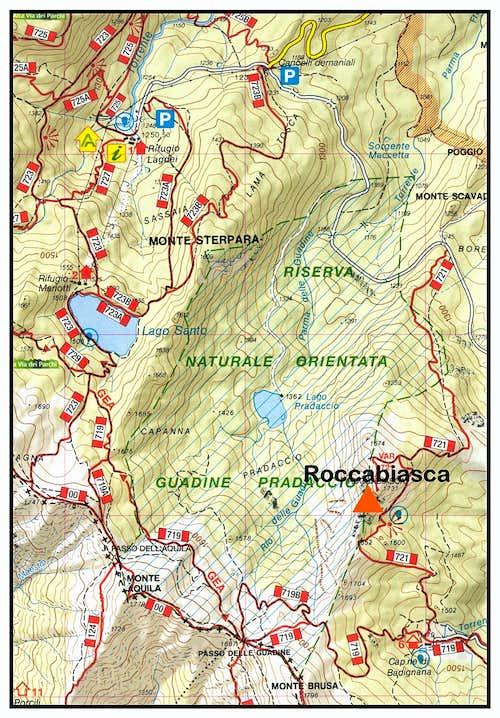 Since 1995 the area surrounding Roccabiasca is situated under the regulation of a regional park having the evocative name of Parco dei Cento Laghi (One Hundred Lakes Park), in reason of quite a lot of small lakes existing inside the park’s boundaries. In late years this area was included inside a largest park, named Parco Nazionale dell’Appenino Tosco-Emiliano (Tosco-Emiliano National Park); wood fires are prohibited as well as free camping and other harmful activity. Walking, mountaineering and climbing are allowed. The whole fauna and flora are protected. Don’t disturb fauna and other mountaineering and hikers’ peacefulness with every kind of noise. Really we all have the mission to preserve this – like others – extraordinary milieu.

- Rifugio Lagoni at Great Twin Lakes m.1507 – 5 km. by car from Cancelli – always open in the week-ends, all the day from june to september

Subcontinental, with cold and snowing winters and pleasant summers, not too hot, because of the mitigating influence of the Tyrrenian Sea and the action of the winds.