Rocky Peak 7,082’ is a magnificent, rocky-topped summit located east of Virginia City in the Flowery Range, an offshoot of the Virginia Range.  The summit area is adorned with spectacular rocky vistas, and could be considered the premier hike in the Virginia Range in northwestern Nevada. 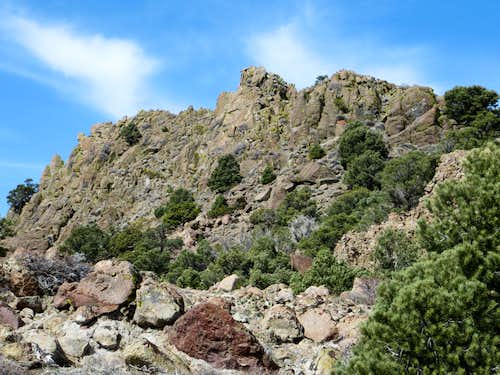 Despite these attributes, Rocky Peak is not frequently accessed, mostly due to being hidden behind major view points from most of the Northwest Nevada population centers and being surrounded by private land.  It is a unique spot, seemingly far from civilization, but in actuality, quite close by Nevada standards; no more than 40 minutes drive from downtown Reno.


Located a few miles east of Virginia City, Nevada, a BLM access road heads up to a ridge behind Rocky Peak within about 3 3/4 miles from paved roads.

Much of the surrounding area is on private lands, with "No Trespassing" signs near some old mining sites (some of which are occasionally active).  This is often a deterrent to visitors who believe the entire area is off-limits.  However, the primary route described below provides public access without trespassing on any of these lands. 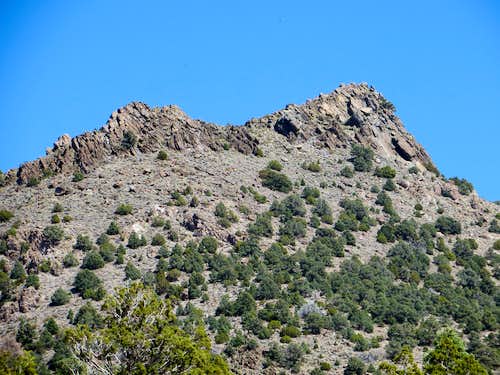 Zoom of Rocky Peak summit blocks from the descent - the south side.

The best time to hike up Rocky Peak and the Flowery Range in general is probably between late October and April.  During summer, temperatures are far too high. The area can get snowy during the heart of winter, although Rocky Peak typically sees less snow than the ridges to the west rising west of Virginia City.

There are two direct routes to Rocky Peak.  The south approach starts on a BLM access road hosting power lines, off of Six Mile Canyon Road.  This road is accessed approximately mid-way between Virginia City and US 50.  3 ½ miles from either location.  The road is at 39.315071, -119.58248.


From Reno, drive to Virginia City over the Geiger Grade (or US 50 from Carson City), and head east on Six Mile Canyon Road which heads downhill from Virginia City on the left.  Drive past the Sugarloaf Rock Formation for 1 ½ miles. There are a couple roads near mining operations. One has a No Trespassing Sign. The one just past it has no such sign. There are large power lines at the base of the road.  The road starts at only about 4770’.

From Carson City, take US 50 east towards Dayton.  Six Mile Canyon is on the east side of Dayton, about 15 miles east of Carson City.  Take a left on Six Mile Canyon and head up about 3 ½ miles.  Park at the base of the road, or on the road.

The north approach starts off Long Valley Road.  This is accessed off of Geiger Grade, just north of Virginia City.  From Reno, head towards Virginia City.  Two miles north of town is a private road called Lousetown Road.  Probably a few hundred people live on this road, so although it is private that does not mean it is off limits.  The problem would be parking near the residential area.  However, for Rocky Peak, you take the main road, Lousetown Road, and after a little over a mile, take a right on Long Valley Road.  Take this dirt road about 2 miles where it turns into Barrel Springs Road.  Continue straight for another third of a mile and park at 39.363, -119.5895 at about 6,030'.  Note that there are a few homes and some nasty signs (including the sign at the entrance to Long Valley Road).  But this area is visited by 4WD vehicles and you should be fine if you stay off private property around the homes themselves. 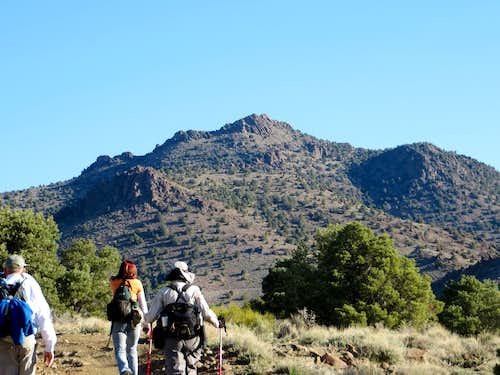 Heading up Rocky Peak in the morning

For the south route, follow the power line road for about 2 miles at which point there is a turn heading right up towards the ridge towards Rocky Peak. The road zig zags up the ridge. At about 3 miles and 6,500’, a road heads slightly up Rocky Peak. Head part way up the road and determine when to start your ascent of Rocky Peak. The rest of the hike is in light brush with some maneuvering around rocks. 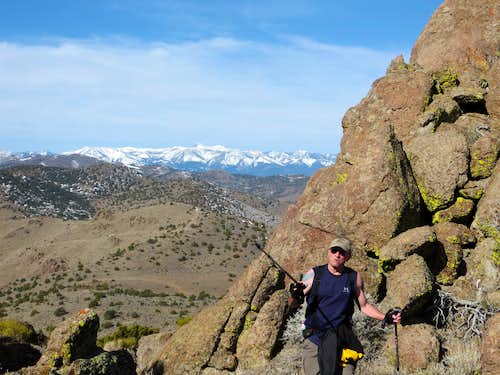 Heading up the final stretch to the summit of Rocky Peak

Once at the base of the summit rocks there are various routes, pretty much all of them is manageable Class 3. Approaching from the left side of the summit block is easiest and shortest.  Although heading straight up is way more fun.


For the north route, start at the aforementioned parking area.  Avoid any signs that are off-limits and head up to the ridge.  Once you see the road below you, Rocky Peak is just above it. There is a road going up towards Rocky Peak, and then you have to bushwhack, reaching the summit in 2/3rds of a mile from the road.  This route is a little over 2 miles one way to the summit, and adding either Peak 7036 or Horse Benchmark adds 2 1/2 miles total.

Be cautious off Long Valley Road.  There are many signs indicating people should not be there, but it could be interpreted that people must avoid crossing private property near any of the remote houses.  Be respectful of private land and stay away from homes and steer clear of signs that prohibit access.