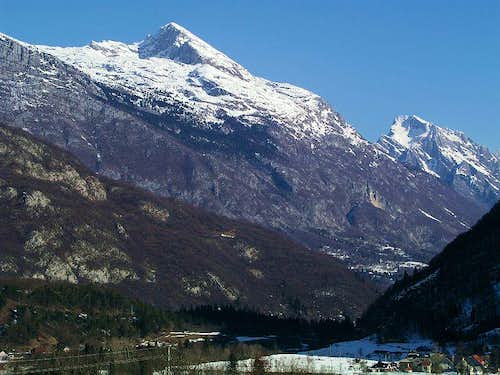 Rombon from the SW
Even if I was two times on the summit of Rombon, I don't have good photo material. The first time I was in the army and of course didn't have a camera with me, the second time we had a video camera. But I don't doubt that pictures will come soon. One of the last 'big' summits of Julian Alps simply couldn't wait for its SP page any more... 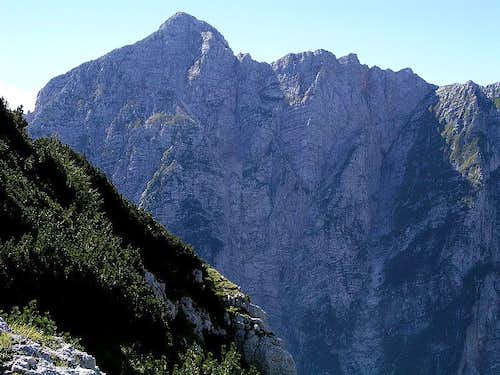 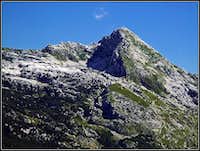 The summit part (from the SW) 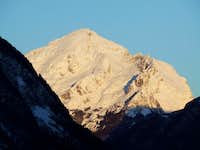 Alex Vega - The summit (from the SE)

Rombon, its peak is called also Veliki vrh, is the highest elevation in a side ridge, going from Kanin/Canin group main ridge towards the South-East. Thus, the whole massif is on the Slovenian territory. Even if it is a part of the massive Kanin/Canin group, the summit is from many sides seen as a fine, self-standing peak. That's why it also offers a great panorama on all sides. On the southern side, just below the summit of Rombon, there's Bovec, the only real town in the upper Soča valley. But it's altitude is only 460 m, so by the shortest route you need to overcome for the ascent on Rombon more than 1700 m. As Bovec lies on the Northern side of a small plane, where Soča river makes a wide turn, Rombon summit is seen from many places in the valley. These southern slopes are covered with beech woods below, grassy above and considerably intermitted with steep rocks.

On the northern side the beautiful Možnica valley divides Rombon massif from the main ridge and the side ridge of Jerebica. Also Možnica is deeply cut into mountains body, its meadows lie on the altitude of some 800 m. Like the majority of mountains in Julian Alps, also Rombon has a steep, on some places almost vertical northern face, allowing also some harder climbs. The long northern wall from Rombon summit to the summit of Vrh Ribežnov is beautifully seen from Log pod Mangartom village and of course from Možnica valley.

As said, Rombon forms a small massif, but peaks other than the main one are more or less unimportant. The majority of them is rising from the main crest of Rombon (Vrh Ribežnov, 2022 m, Prišna glava, 1946 m, Malo and Veliko Ušje, 2048 m). From the summit of Rombon, the main ridge falls steeply down, forming just above Koritnica valley a few minor bumps (Kanja, Kucer, Na Robu). From the main summit towards the SW a side ridge goes, which also lowers soon, finally forming a distinct bump, called Čuklja, 1767 m. We shall tell more about it later. West of the main summit, towards the main ridge of Kanin/Canin massif, a broad karst plateau is stretching. This is one of the most amazing places in Julian Alps. Its limestone is like a Swiss cheese, all water disappears immediately underground, so no wonder that in last decades some of the deepest caves in Europe were discovered here.

The ascent on Rombon is not hard, it's more or less only a strenuous walk-up by paths, marked or unmarked. The summit ridge is rocky, that's why Rombon is not a usual goal for tour skiing. Skiing can in good conditions be done from the very summit, but requires a perfect mastery of technique and good nerves on a few expposed passages. From the summit you have a great panorama on the whole wreath of mountains, encircling the beautiful Bovec cauldron.

Rombon's geology is quite simple. Almost the whole massif is built of dachstein limestone from the upper triassic period. As elsewhere in the massif of Kanin, these thick layers of limestone are lying on a bit older layers of main dolomite. On Rombon, these are coming on the surface only on the slopes above Možnica valley. And that's more or less all, because for us it's less important that just above the valley near Bovec some jurassic and cretacious rocks can be found.

Možnica waterfall
1. Raveljnik World War I trenches. East of Bovec, arranged for a tourist visit.
2. Cemetery from the World War I. East of Bovec, on the crossroads into Koritnica valley.
3. Kluže fortresses. The lower and the upper fortress (Fort Hermann), by the road into Koritnica valley.
4. Možnica waterfalls. A nice hike by unmarked paths, not all the time easy, visits some nice waterfalls and cascades.

A Heaven For Speleologists

Erosion and tectonic moves created in Kanin massif many very deep and long caves. The depth potential of the massif is over 1800 m, which creates some possibilities to get even deeper as explorers came today. Each year, mostly in dry seasons, in these caves expeditions of the best speleologists of the world arrive.

The deepest cave on the Kanin-Rombon plateau is Čehi 2. Its depth is 1502 m, the entrance was discovered in 1991 by Czech, Italians came till 1993 1370 m deep and almost 4000 m into the massif of Rombon. In 1999 Ucrainian speleologists in a 14-days expedition discovered a new perplexus of tunnels, which lead them down on 1380 m of depth. Finally on December 29th, 2003 Slovenian speleologists reached the lowest point on the depth of 1502 m.

Here's the list of some famous caves in Rombon massif (source):

The World War I On Rombon 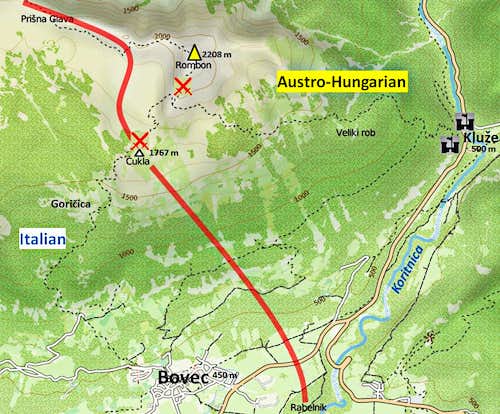 The frontline during most of the WW1

Over the eastern part of Bovec plane during the WW1 the frontline was running. While on a small hill of Raveljnik, 519 m, above Koritnica there were Austro-Hungarian positions, in Bovec and Čezsoča there were already Italians. They both didn't move much, until the final 'blitzkrieg' in 1917. At Kluže, where the Rombon massif drops down to Koritnica valley, far back in Napoleon's time two strong fortresses were built, guarding the road passage above a wild, more than 70 m deep canyon. The lower fortress is now renewed and can be visited, while the upper one (named also Fort Hermann) was standing on a less fortunate place and was shelled heavilly by Italians. It's ruins can also be visited by a broad path.

The most severe fightings were for the small Čukla (Čuklja) summit and, also for the summit of Rombon itself. The italians were building the whole infrastructure by communication lines (including material cableway) up from Bovec on the S and from Černela on the NW, while Austrians were supplying to the frontline from Kluže (also with a material cableway) on the E. A short outline of events is below:

By car/bus Soca valley and Bovec can be reached over Vršič pass (from Sava valley), over Predel/Predil pass (from Tarvisio) or from the south, from Gorica/Gorizia. Soča valley can be from Italy also reached from Udine via Tarcento. 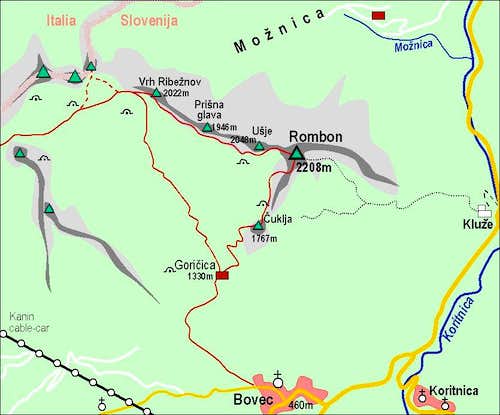 You start in Bovec town and ascend through the woods on Goričica meadow. During the World War I this was the main supply route for the Italian positions on Ćuklja and higher, so all around there are many remains from the war. The today's marked path however goes mostly through the woods. From Goričica you continue further towards the north on Čuklja and then west of the south ridge till the broad, steep rocky ravine, which brings you right on the summit ridge. Then by it in a few minutes on top. 1750 m, 5:30 h. Marked walk-up, some rocks on the top. By the Swiss Hiking Scale the ascent difficulty would be rated T2/T3. Hot in summer! From Čuklja to the summit we can also follow a steeper route, which goes all the time by the South ridge. It's harder and has some steel ropes to secure passages.

You start the tour from the upper station of Kanin cable-car, on 2200 m. Over the notch below Prestreljenik, 2282 m, you descend on Prevala pass, 2067 m, and then continue over the southern slopes of the main ridge to Vrh Ribežnov notch (speleological bivouac!). Near Vrh Ribežnov the marked path turns towards the SE and goes over the southern slopes of Rombon ridge. The terrain is more a high plateau, so the path goes a bit left and right and also up an down. Also on this route we can visit many ex Italian positions from the war. When the path approaches the summit of Rombon, it ascends steeply on the northern edge abov Možnica valley and over the rocks soon gains the summit of Rombon. Marked path, only the summit part rocky (scramble), T3 by the SAC Hiking Scale. 3:30 h to 4:00 h. It is best to descend into Bovec by the route #1 and then go to the lower station of cable car, where we probably have our car.

You start at Kluže fortress, on the main road. First you go up to the higher fortress, and then continue in a western direction by abandoned military paths. Between Krljišče, 1753 m and Kucer, 1638 m, you turn right (northwards), ascend the upper part of the mountain and continue towards the NW till the highest point. Marked, still some orientation skills needed. As I have not done the route, I will not rate its difficulty. 1700 m of ascent, 5:00 h. If behind Kucer you stick to the East ridge, you can reach the summit in an easy climb.

Rombon can be best climbed in late spring and in autumn. Summer is of course possible too, but the tours can be very hot. For tour skiing other goals in the Kanin/Canin group are more appropriate (but also Rombon is possible). Also classical winter ascents are possible but you will need a winter equipment (crampons, ice-pick) and you should have in mind a big altitude difference.

On the mountain there are no opened mountain huts. Camping is officially not allowed, but is tolerated for speleological expeditions. For mountaineering nobody will bother you if you set up a tent just over the night. Otherwise you can find accomodation in Bovec, which is developing into one of our most attractive tourist destinations. The main attraction of it is Soča river, of course.

Speleologists have arranged a bivouac on the main ridge, near Vrh Ribežnov, 2022 m.