Gran Canaria is the third largest and third highest of the Canary Islands. Like all its neighbours it was created by volcanic activity, which, however, dates back to about 2000 - 3000 years. So the prime forming factor on Gran Canaria was erosion, which formed deep canyon-like barrancos as well as huge erosion craters. The largest of these features is Caldera de Tejeda in the west of the island. To the north-east the caldera is bounded by the central highland of Gran Canaria, a pllateau-like plain with sudden drops of several 100m on all sides. Though the highest point of the island is Pico de la Nieve it central landmark is Roque Nublo.

Roque Nublo (cloudy rock or misty rock) itself is only 65m high but thanks to its central location on Tablon del Nublo, an elevated platform of the Cumbre Central it attracts attention from all sides. The rock is accompanied by lower Roque Rana to its south-west and stands at the north-western end of the plateau, virtually hovering above the caldera. Roque Nublo is a former volcanic plug, made up from red basalt, which is the most typical rock of the Canaries. Thanks to its solidity the rock withstood erosion much better than the surrounding volcanic ashes, which were washed away through Caldera de Tejeda to the sea. Similar plugs can be found inside the caldera: Roque Bentaiga and Roque Palmes.

As the main landmark of Gran Canaria, Roque Nublo can be very easily reached. There is a small parking lot close by and the hike to Tablon del Nublo takes little more than 30 minutes. On fine sunny days the plateau can be very crowded with tourists. Also, both Roque Nublo and Roque Rana are the most popular climbing destinations of the island (even though there are lots of opporunities on the nearby big walls of the Cumbre Central). The following section gives a brief overview over the routes.

Even though Roque Nublo is the most prominent climbing destination on Gran Canaria you will find little real information about its climbing routes on the web. There are two sites, which list routes but you won't find a topo there. The listed routes are all bolted sports climbing routes and include Roque Nublo and its neighbour Roque Rana. The below image by Jan van Genk shows four routes on Roque Rana's north face.

Gran Canaria can be reached from any major European airport. Usually charter carriers fly there but the spanish airline Iberia has also regular flights. The airport is on the eastern coast of the island, far away from the tourist centres in the south. 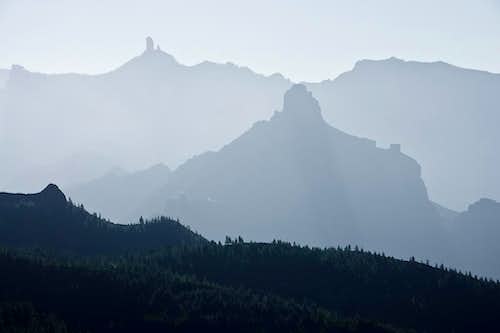 Roque Nublo can be climbed all year round. There are rumours that once or twice a year there can be snow. So you might want to try on any other of the remaining 363 days of the year.

On Gran Canaria you can find all types of red tape. While the eastern half of the island is densely habitated and there are no restrictions to speak of, the centre of the island, Caldera de Tejeda, the Tamadaba Range and much of the southern highlands have been declared natural parks or monuments. In these parks accommodation (camping) is restricted to the designated sites (see above) and activities are limited to hiking along the designated trails.

Gran Canaria is a climbers' island with many locations all across the place. There used to be some red tape if you wanted to go climbing, but by 2013 no permits were required anymore - provided you don't start bolting new routes.

Of course you can find a lot of hotels, fincas and casas on the island which you can book from any travel office. Those of you who prefer to camp are in for a pretty cumbersome process. There are two official campsites, both at sea level in the south of the island.

There are quite a number of camping zones in the central part of the island (see a list below). You can camp for free in these camping zones. The facilities are very basic. At most of them there are toilets and there is drinking water, sometimes fire pits. But you need a permit!

Somewhat inconveniently, you have to get your permit in Las Palmas (don't forget your ID). The address:

The following campsites in the centre of the island (Artenara, Tamadaba and Tejeda) are maintained by OIAC. For more information and a PDF two pager on each campsite (as well as others) followthe OIAC link above.

There are several sites on the web which give you information on the weather on Gran Canaria. However, they all show the weather for the coastal regions (Playa dos Ingles or Las Palmas) which significantly differs from the weather in the mountains. Moreover weather conditions along the weather divide of Gran Canaria cannot be predicted accurately. The following table shows data for Las Palmas on the coast. 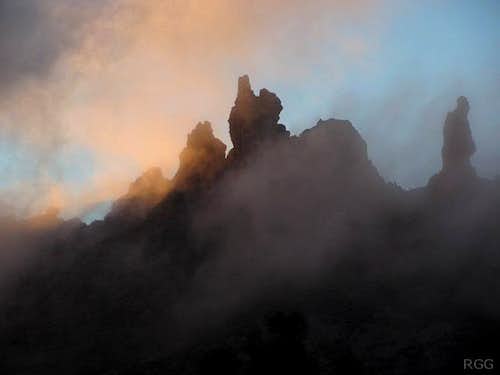 Roque San Jose and El Fraile among wifts of clouds

The mountains themselves - being of the same altitude -finally stop the clouds so that on their southeastern slopes the clouds "run out". Roque Bentayga is located centrally in Caldera de Tejeda. While clouds often ooze across the caldera rim they hardly ever make it to its centre, so that Bentayga is in one of the driest and sunniest spots of the island.

Hiking
My recommendation is a guidebook by Rother Verlag, available in English, German and Spanish. The book is an excellent hiking guide covering all the interesting areas of the island. Since it comes with small maps for each excursion it might even be used without a map to support them.