Wilson Peak sits at the SouthWest of the Spanish Peaks unit the Lee Metcalf Wilderness with Jumbo, Table, and Gallatin Mountain being it's closest neighbors. It is probably the most distinguishable mountain and I would argue gorgeous that can be viewed from Big Sky Resort and is approximately 48 miles from Bozeman. 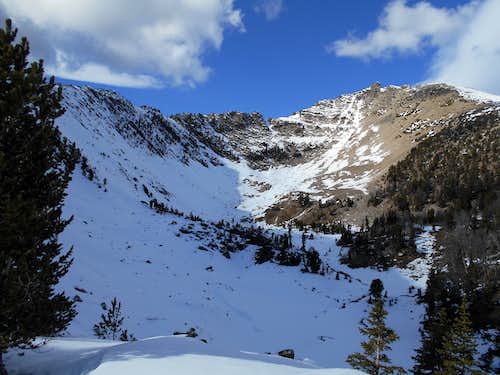 Wilson Peak from Dudley Lake
I had recently fractured my forearm that September while descending Crazy Peak and finally eight weeks later my arm wasn't perfect but well enough to start climbing again. I left my house in Bozeman around 7:30 AM that morning and made it to Dudley Creek Trail around 8:20 AM. From the Trailhead to Dudley Lake is about 4.5 miles, however I about 3 miles in left the trail and simply followed Dudley Creek to Dudley Lake (trail ends at Dudley Lake if you stay on the trail). Reached Dudley Lake around 11:30 AM. Took a small break to down some food before beginning the ascent. 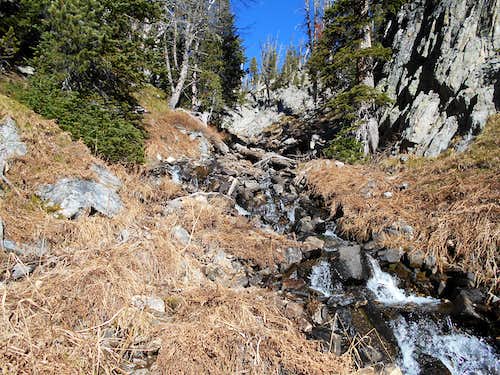 Hiking along Dudley Creek
To the Northeast past Dudley Lake there is an obvious slope leading up to the summit. This Northeast slope would be my descent route but for the ascent I hiked around the south shore of Dudley Lake and headed west for the tarn in in the corner of the North and East ridges. The tarn is I would estimate is a good half mile from Dudley. Earlier that October there had been a descent snowfall that I was out of town for. The snow line began at Dudley Lake so about halfway between Dudley and the tarn is where i put my crampons and got out my ice axe. Once I passed the tarn i headed Northeast about 500-600 yards i would estimate to the North Face of Wilson before beginning the steep climb East up the couloir. 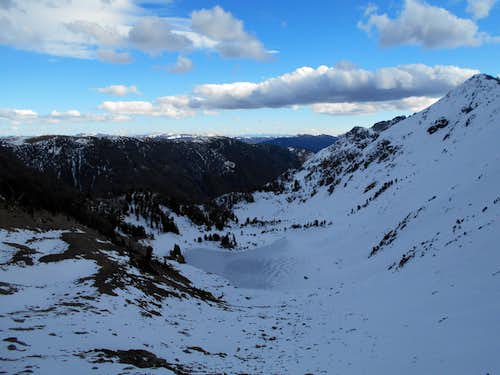 Looking Southwest at the tarn at the beginning of the couloir
Climbing up the couloir to the east the snow was far from perfect but stable enough for a fairly straight forward snow climb. I would call the east couloir a 30° grade so steep but certainly not as long as Gooseneck Glacier (for those who have climbed Gannett). Once I made it to the top of the ridge I began traversing North towards the summit. The snow had melted entirely off the Northeastern face of the mountain making for a very fun scramble to the top. Some sections were decently exposed but overall I would call the North Ridge a moderate Class 3 scramble. There was without a doubt a fair amount of loose scree but the rock was overall very stable (was extra careful about loose rock after Crazy Peak eight weeks earlier). 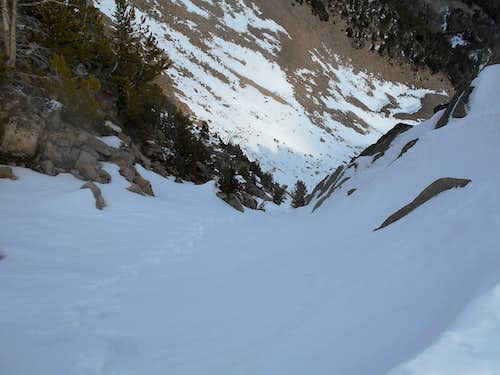 Looking down the East Couloir 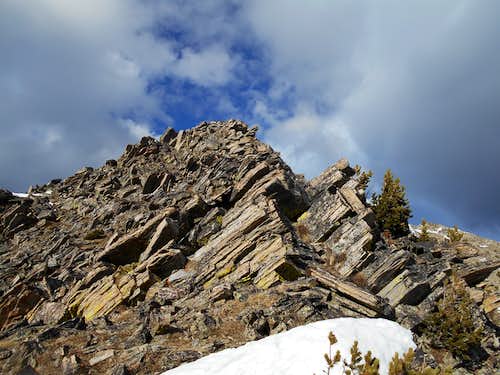 The final scramble to the summit
I reached the top around 2:30 PM and was greeted by some amazing views Lone Peak, Gallatin Peak, and all of the surrounding mountain ranges in the Bozeman/Big Sky area. Spent maybe thirty minutes on top before beginning the descent. The same obvious slope that I mentioned earlier I descended Southwest back to Dudley Lake. The scramble down was fairly simple and I would recommend this as the ascent route for those who are less experienced. I made it back to Dudley Lake around 4:15 and began the 4.5 mile hike back down Dudley Creek trail. Sunset was 4:56 that day so I pulled out my headlight and enjoyed a majority of the hike out under the stars.
Overall Wilson Peak was one of my favorite Mountains I've climbed all year and definitely one I would recommend. 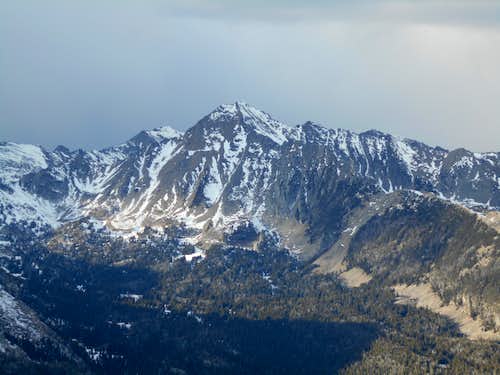 View of Gallatin Peak from Wilson 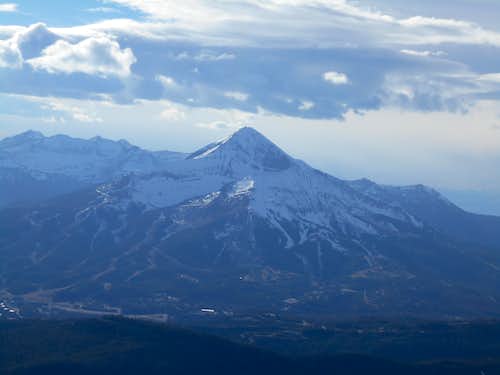 View of Lone Peak from Wilson