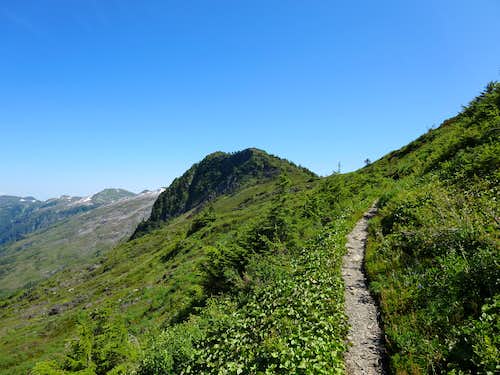 trail beyond Deer Mountain
This is a climb that uses the Deer Mountain trail to gain tree line and continues (from the junction where one heads up the final slopes to the Deer Moutain summit) on toward Blue Lake for another couple of miles going over the top of Roy Jones. After climbing Deer Mountain several times, it was a nice change on a beautiful day to head further down the ridge.  The hike took about 6 hours roundtrip from Pier 3 in Ketchikan.
Per a 2016 Alaska History and Cultural Studies article, "Alaska's first commercial airline operation began in Ketchikan when Roy F. Jones flew a flying boat named the Northbird from Seattle. When he taxied to the Ketchikan dock on July 18, 1922, Jones and his mechanic received an uproarious welcome. Church bells, fire sirens, and steam whistles marked their arrival. The men were carried on the shoulders of the crowd to Pioneer Hall to receive special honors.

For the rest of the summer, the Northbird carried miners, sales people, and sightseers from Ketchikan to remote fishing and mining camps. Jones returned the next summer with plans to expand his airline, but the Northbird crashed on a flight from Ketchikan to Loring. Though Jones was uninjured, he abandoned his plans. Southeast Alaska needed air transportation, but the airplanes to provide it had not yet been perfected. Engines lacked adequate cooling systems and were undependable. Bearings were inferior and early floats were heavy and awkward, limiting the loads that planes could carry." 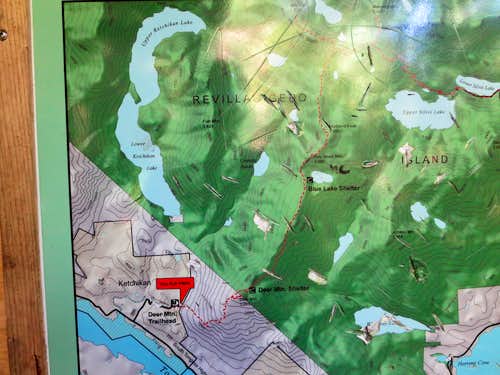 trailhead map
Although there are no roads to Ketchikan, it is served by an airport and the Alaska ferry system. It is frequently visited by cruise ships during the months of June - September.

From Stedman Street and Creek Street near the water, head SW on Stedman to the IGA store on Deermount Street. Head up Deermount Street to the end where you turn right onto Ketchikan Lakes Road which continues climbing and takes you nearly to the trailhead which is located on Deer Mountain Trail where after a left turn you will see a parking area and signs to the trailhead on your right. 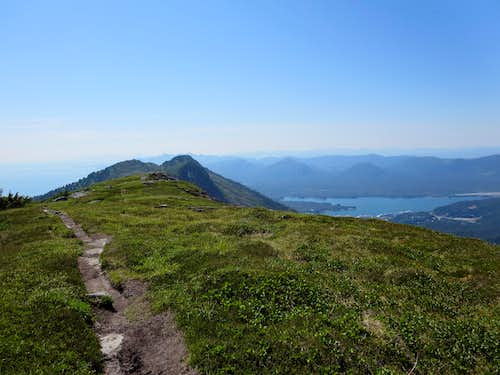 looking back to Ketchikan
The climb begins at the Deer Mountain trailhead. After gaining about 2,300’ elevation over about 2 ¾ miles, you reach a trail sign indicating that Blue Lake is about 2 miles further. Follow the path northerly for about 2.25 miles further to reach the summit of Roy Jones mountain. 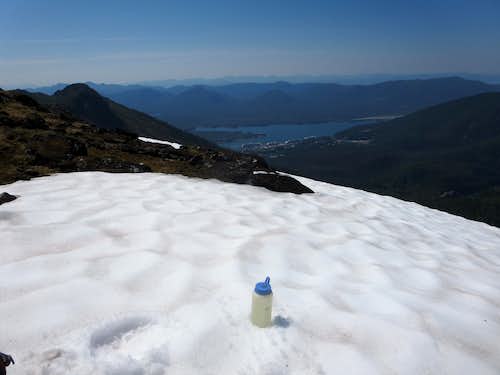 There is no red tape involved to climb this mountain

Summer is perhaps the easiest, however winter hiking with snowshoes may be enjoyable.