It took an hour to drive to Machachi. Once there, Javier found a hotel right in the center of town. Amanecer del Valle. Great hotel for $20 night. Nice room with shower. 50 feet from market. 2 blocks from bank. 1 block from bus stop (to return to Quito). Got a great haircut for $3, changed some money. walked around, watched a concert.


Getting ready for Rumiñahui

Farted around until the evening. We planned to climb Ruminahui early Monday AM. I passed on sleeping on the peak because of the continual terrible weather. It rained and turned overcast Sunday afternoon, so I knew there would be no pic/videos at the peak. I told Javier and his cousin, Ernesto, that a hike up to the cloud line would be fine, wherever that would be on the volcano.

For $60, Ernesto would pick me up and drive me up to a trail-head. This trail was a common one, but would take about 4 hours to the peak. This was a lot better than paying the guide/agencies $160.
NOTE: No one posts what they pay for guides because they are embarrassed to say so. For me, paying guides is okay, but not what they charge in Ecuador. You will not find a guide or agency on the Internet who will charge less than $160/1 person to climb a volcano. If you have time like I did, go there and start asking around until you get some leads.

At 300AM, Ernesto came by with his 4WD and we drove up to his property where the trail started. We parked and started off at 400AM. The trail was easy to pick up after a while. There were 2 streams at the beginning of the trail to load up with water. This trail went up a mountain finger between the two peaks, just to the left of the main peak. 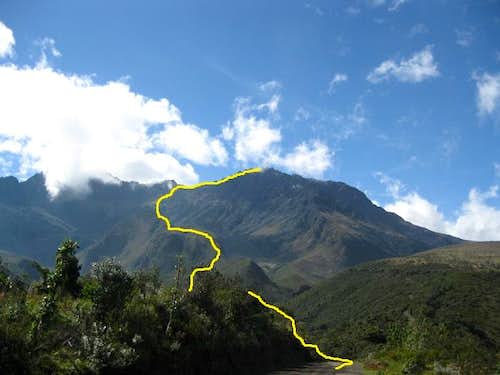 It took us 2 hours to get half way up the trail where we stopped and I made the decision to hold and watch for any break. There was no weather break by 6:30ish, so we moved back down for about 15 minutes to a rock wall where we built a fire and rested again. I found a hill knob to lay down on and caught some of the sun coming over the left ridge. Here we sat until 8:00 when I decided to go back down. 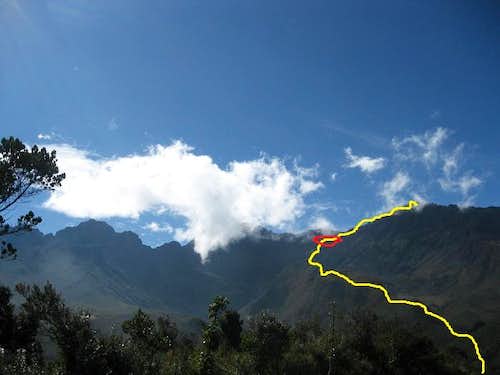 Route up
Of course, the weather broke more and more as we descended. By 900AM, we were down at the trail head, and the weather on top looked great. I really hated the weather during this trip. Ernesto drove me to the hotel where

I showered and packed up. I walked a block to the corner where the “Mejia Express” picks up to go to the “Trebol” bus stop in Quito. This bus leaves every 30 minutes to Quito and cost .70cents. 1 hour later we arrived at a turnabout where taxis waited.

It was only a $3 taxi fare to Casa Kanela hostal, the same hostal I stayed at when I arrived. Got a private again with breakfast for $18. Dropped clothes off to get washed. Went to mini-mart to buy some food and took along nap. Chatted with the guys at the mini-mart for the evening then retired.

NOTE: The Quito airport is vacant during the weekdays. When we pulled up to the departures wing, we were the only vehicle, car or bus, at the curb.

Flight from Quito to home via COPA. Had no issues with COPA coming or going, and no problems with connections. Got free meals/drinks on all four flights.

If you have any questions about my trip to Ecuador, shoot me an e-mail.